From an undeveloped island on the perimeter of the South China Sea, a Bat 12 unmanned aircraft system (UAS) rises from an open field. The catapult-launched, tactical low-observable/stealth aircraft makes its way over the water searching for a maritime target. The Bat 12 UAS operator, a U.S. Army sergeant, received her cue from a high-altitude balloon with passive electromagnetic sensing and another balloon that connects data feeds from U.S. Navy assets, both launched at sea hundreds of kilometers away. The targeteer, an Army sergeant
1st class sitting in the Multi-Domain Task Force (MDTF) Headquarters on a different island, integrated data from the air assets with sensors on maritime drones by using custom artificial intelligence (AI) and machine learning (ML) capabilities.

The Bat 12 operator and the MDTF targeteer both work in austere conditions. Both drink water from small-unit water purification systems, negating the need to transport potable water. Both draw power from micro-grid technologies that smartly distribute and store electricity using a combination of battery and power generation technology that enables mobility, decreases heat signatures and vastly reduces the need for logisticians to transport fuel. Autonomous land vehicles and lead-follow technologies reduce the sustainment operation’s manning requirement. 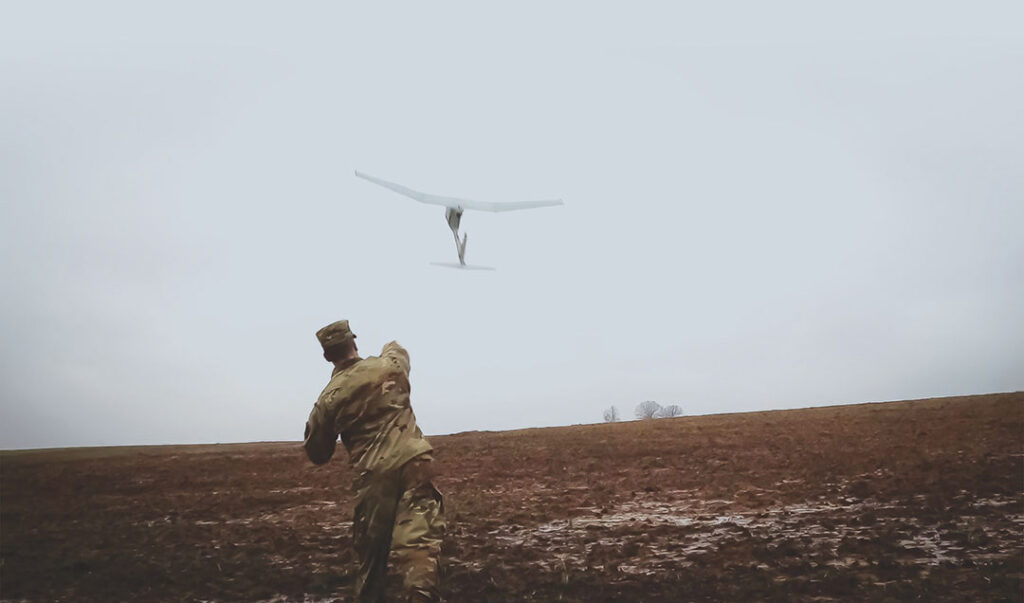 Army watercraft that distribute supplies to the dispersed nodes of the MDTF are also equipped with electromagnetic and communications suites, contributing to MDTF resiliency. Any one of the craft can also be configured to launch UAS or serve as a firing platform for the High Mobility Artillery Rocket System (HIMARS). Onboard, a compact critical care facility is stocked and ready to receive a trauma team and their casualty to care for and transport across littoral waterways.

Data from Army-controlled sensors, along with information from other U.S. service platforms and space assets, pours into the MDTF and Intelligence, Information, Cyber, Electronic Warfare and Space (I2CEWS) G2 data integration center. Army intelligence analysts and data scientists sit side by side constructing and maintaining AI/ML programs that structure and collate terabytes of data in minutes, instead of having to send data across the ocean and wait for operational intelligence. The MDTF can now independently compare that data with other intelligence feeds from the coalition to maintain a multi-domain common operating picture (COP) and an organic MDTF targeting process, which in turn automatically updates all of the COPs that feed it.

The Bat 12 finds its target, provides visual confirmation and confirms that no civilian ships are in the vicinity. The MDTF COP updates the Joint Task Force COP, initiating a time-sensitive targeting process that looks for available shooters. The best weapon for the target is the MDTF’s HIMARS multi-rocket launch system, located on yet another island. With a communication link provided by a separate UAS, the MDTF transmits targeting data and gives the command to fire, and a salvo of U.S. Army long-range anti-ship weapons launch into the sky. To avoid counterbattery fire, the HIMARS unit moves to an alternate firing position while I2CEWS assets conduct nonkinetic fires to mask and protect its movement.

The pace of today’s technological change has challenged U.S. military research, development and acquisition processes, and potential adversaries have leveraged technology to create significant capabilities that U.S. forces must overcome. The U.S. Army’s answer to that problem is a multifaceted approach spurred by the realization that it “can no longer afford to defer modernizing our formations and capabilities without risking overmatch and the ability to accomplish our mission on future battlefields,” according to the 2018 Army Modernization Strategy. Two of the most important changes the U.S. Army has made are organizational and conceptual. Organizationally, the U.S. Army has consolidated research, development and acquisition functions into the Army Futures Command, which acts as the Army’s technology manager. Conceptually, it has adopted multi-domain operations (MDO) designed to “penetrate and disintegrate enemy anti-access and area denial systems” and “expands combined arms for a new strategic context, accounting for new technologies — most notably cyber, robotic and autonomous systems, and artificial intelligence — and adversaries who can contest all domains, ” according to a December 2018 United States Army Training and Doctrine Command pamphlet. 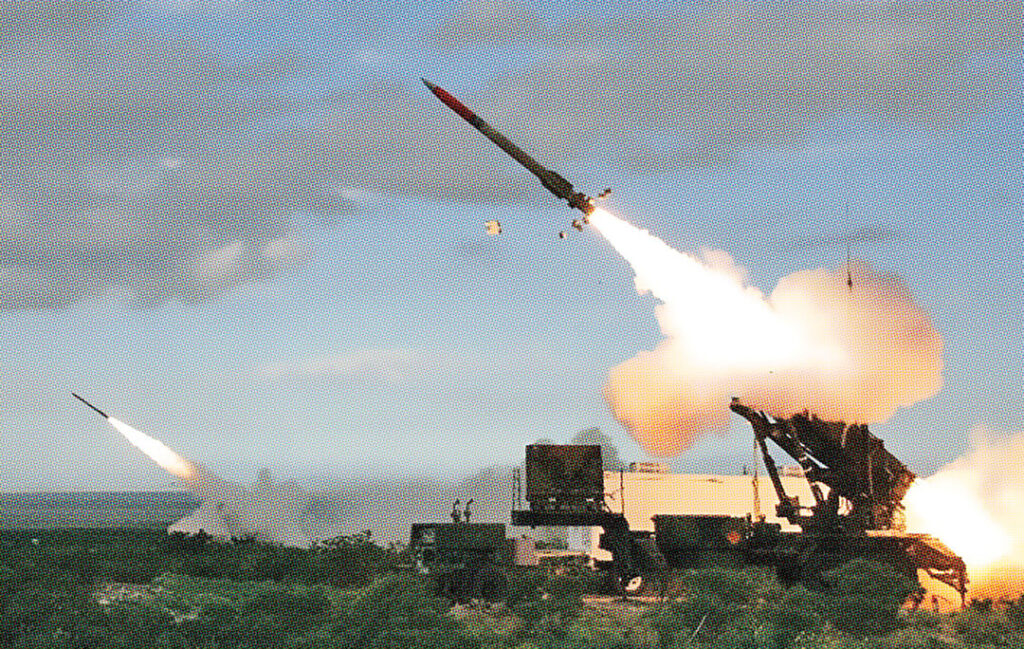 The U.S. Army test fires a Patriot missile at Redstone Arsenal in Alabama. The ground-based mobile defense interceptor is included in the Army Air and Missile Defense 2028 vision, which combines cutting-edge and veteran technologies to deter, prevent and defeat air and missile attacks. JASON CUTSHAW/U.S. ARMY

The U.S. Army tasked the U.S. Army Pacific (USARPAC) headquarters with conducting the pilot program for the first MDO formation, the MDTF. Fortunately, USARPAC was already organized to address future concepts and future capabilities through its own Futures Division. The USARPAC Futures Division has special working relationships with national research and development organizations, industry, think tanks, Army and Defense Department analytical centers, allies and the joint force that it leverages to create experimentation opportunities in USARPAC and U.S. Indo-Pacific Command (USINDOPACOM) exercises, war games and studies. USARPAC endeavors to find ways to improve an MDTF’s ability to conduct organic targeting for long-range precision fires while operating in an environment that limits communications and land maneuver.

Experimenting with automation, the Futures Division is devising ways to test the coordination of runway independent UAS to interact with ocean wave gliders, combining air and maritime automated sensing capabilities, comparing and contrasting data to positively identify maritime contacts. The resultant maritime domain awareness will provide an MDTF with the capability to share a common operating picture with the host nation and the joint force. During competition, it translates into the MDTF’s ability to contribute to domestic law enforcement activities and, during heightened competition and conflict, the ability to discern friend from foe for the MDTF, joint, and multilateral forces. As more unmanned and autonomous platforms become capable of remote launch, control and recovery, the Futures Division will find ways to put them in the hands of multi-domain operators at the lowest levels, thereby increasing capability, capacity, redundancy and lethality.

Sometimes, the best counter to a new technology is an old one. The USARPAC Space Division and Futures Division also coordinates with sister services and other combatant commands in the development of high-altitude technologies, such as balloons, dirigibles/airships, and solar fixed-wing platforms. These technologies provide substantial passive and active intelligence, surveillance and reconnaissance collection capabilities due to their dwell time and payload capabilities and create significant challenges to adversarial targeting. Balloons can be launched from nearby land features or ships or by the MDTF itself, carrying passive visual and electromagnetic sensing capabilities that further contribute to early warning, a multi-domain common operating picture and targeting process. Airships and fixed-wing platforms can launch and recover from distant locations to do the same. These assets can also deploy to provide tactical and operational communications capability, either enhancing the MDTF’s ability to coordinate with other joint and allied forces, or to replace capabilities lost to adversarial anti-access, area denial operations. The U.S. Army and USARPAC are pursuing high-altitude technologies to further enable the MDTF forward.

The benefits that an MDTF accrues from being able to control sensor platforms in several domains and receive data from service or national sensors is the ability to have a truly organic over-the-horizon targeting capability, but it comes with a big data-processing bill if that data is used to make timely decisions. Nearly all data fusion for operational fires, kinetic and nonkinetic, occurs at levels much higher than a brigade, requiring the transmission of data out for analysis and the transmission of information back to a shooter. Just as logistics technologies are being integrated into the MDTF to reduce transportation requirements for fuel and water, AI/ML are being integrated to reduce the data transportation requirement and improve organic decision-making capability.

The Tactical Data Team is an initiative by the Army Futures Command and the Army Applications Lab in cooperation with USARPAC to address the need for forward edge computing in multi-domain formations like the MDTF. Small teams of data scientists deploy to the point of data entry to structure and analyze data by building custom AI/ML software solutions on the spot. This forward edge computing capability greatly increases the timeliness of MDTF fires, both nonkinetic and kinetic. Additionally, since authorities for conducting those fires must reside where adequate analysis occurs, this new AI/ML capability will help facilitate movement of authorities down to the MDTF, enabling them to act more effectively on mission orders when communications are denied.

Technologies required for an MDO formation to fight and win in the Pacific are numerous and multifaceted, covering the span of warfighting functions. Studies, exercises, experiments and wargames have revealed several applications of technology that have been extremely effective. The Futures Division continues to design and support these efforts as it persists in its mission to assess the needs of a Pacific Army and improve the concept and application of MDO in the Pacific Theater as USARPAC’s technology manager.