For many militaries in the Indo-Pacific, force modernization involves some degree of purchasing foreign military equipment, and the United States has seen requests to buy its hardware and technology soar.

When it comes to the total number of arms transfers worldwide, the United States, Russia, France, Germany and China ranked in the top 5 — in that order — between 2014 and 2018, according to the Stockholm International Peace Research Institute (SIPRI). Together, they accounted for 75% of the total volume of arms exports during that period. Of that, more than a third, or roughly 36%, of exports originated in the U.S.

“The United States is committed to strengthening allies and partners worldwide to meet their own legitimate self-defense needs and to improve their capabilities to operate beside U.S. forces to address shared security challenges,” according to a May 2019 statement by the U.S. Department of State’s Bureau of Political-Military Affairs, which oversees most government-to-government arms transfers and commercial export licensing of U.S.-origin defense equipment and technologies. 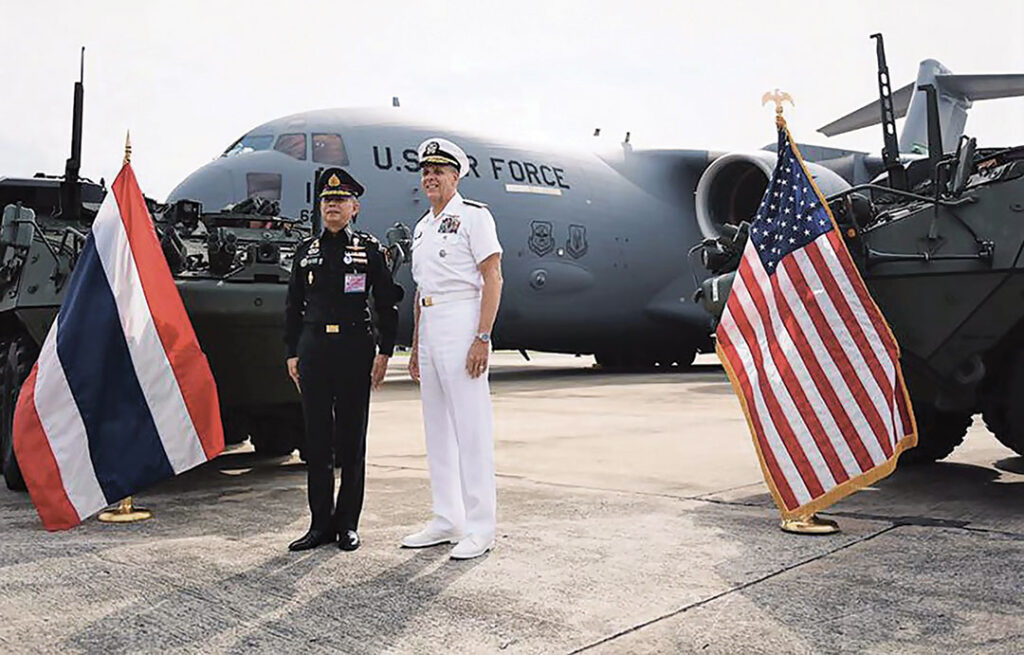 Arms sales and defense trades are key tools in foreign policy and have potential long-term implications for regional security. That’s why the U.S. Department of Defense (DOD) considers political, military, economic, arms control and human rights conditions when making decisions to provide military equipment and technology to any country, the DOD said.

The United States signed U.S. $55.6 billion worth of weapons contracts to allies in fiscal year 2018, amounting to a 33% increase over 2017 as President Donald Trump gave the green light to sell more, more quickly, overseas. By the end of the first three quarters of fiscal year 2019, U.S. foreign arms sales contracts had reached U.S. $44.1 billion.

The SIPRI report noted that the gap between the world’s top two arms suppliers also grew. U.S. exports of arms were 75% higher than Russia’s between 2014 and 2018, while they were only 12% higher during the previous four-year period, according to SIPRI.

Foreign military sales (FMS) is a complex system, said Maj. Gen. Jeffrey W. Drushal, commanding general of the U.S. Army Security Assistance Command (USASAC), who spoke on the topic during the Land Forces of the Pacific (LANPAC) Symposium and Exhibition in Honolulu, Hawaii, in May 2019. The U.S. works with its partners step by step to generate the right bid for the right type of service, and USASAC executes about 95% of the U.S. Army’s FMS. 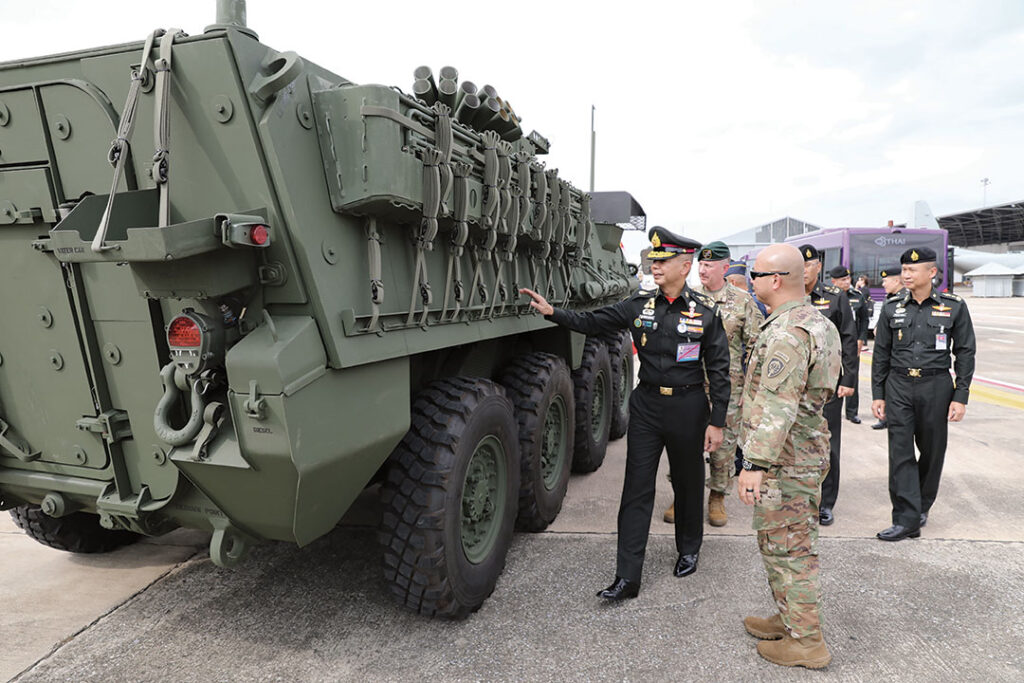 Royal Thai Army Commander in Chief Gen. Apirat Kongsompong inspects one of the Stryker combat vehicles after it arrived.

It all amounts to maintaining the integrity of the process, which makes the U.S. such a sought-after partner.

USASAC helps demystify the FMS process with a letter of request checklist to help potential buyers flesh out details of the equipment they need and its purpose. Requests must:

Additional details about the equipment’s intended use or the desired duration and location of service must also be submitted.

Drushal acknowledged that the No. 1 item of feedback USASAC receives is that its FMS process is too slow.

“The contracting timeline takes an extraordinarily long time,” he said. “One of the advantages of using U.S. FMS is the integrity of our contracting process.” Partner nations often ask if there are ways to speed up the buying process, he said. “It takes a little bit longer, but it ends up in the right result, and the result is uncontestable and impervious to corruption.”

Increasing tensions in the Indo-Pacific — including those in the South China Sea and the People’s Republic of China’s increasing push for influence in the Pacific and elsewhere — will likely drive a sustained increase in FMS by the U.S. to its Indo-Pacific partners.

“Aircraft and air defense purchases from East Asia and Pacific region are driven by increasing tensions in the South China Sea as well as a need to recapitalize aging military equipment,” according to Military Embedded Systems magazine. “In Near East and South Asia, there is a general demand for more advanced air and ground forces, an insatiable appetite for U.S.-made equipment.”

Market research company Frost & Sullivan forecast that the DOD’s FMS market would grow at a compound annual rate of about 3.4 percent between 2015 and 2021 with the most requested and delivered items being ground-based air defense weaponry, fighter aircraft, training services and tactical vehicles.

To accommodate the demand, USASAC has a country program manager assigned to each allied nation. Once the checklist is complete, specific actional requirements can be met to transfer technology. USASAC representatives work through the language, procedures and training needs, which Drushal called the bricks of operability.

Drushel knows the geopolitical climate will spur more requests, and his team stands ready to continue helping partner nations build new capabilities. “The demand for U.S. defense products is not going to go down,” Drushal said at LANPAC. “It’s only going to go up.”