Early storm warnings, mass evacuations and proper coordination between militaries and civilian relief agencies have drastically reduced death tolls across the Indo-Pacific region, and humanitarian assistance and disaster relief experts say continued use of the alarms is essential.

Recent successful evacuations in the region have prompted many governments to review their capabilities and address gaps in relation to risk analysis and forecasting tools for severe weather, flooding and drought.

Stronger coordination and communication mechanisms are flourishing in disaster-prone areas as local meteorologists work nationally and across borders to upgrade forecasting. Increasingly throughout the past decade, the need for, and use of, early warning systems has been amplified across the Indo-Pacific region in disaster risk reduction. 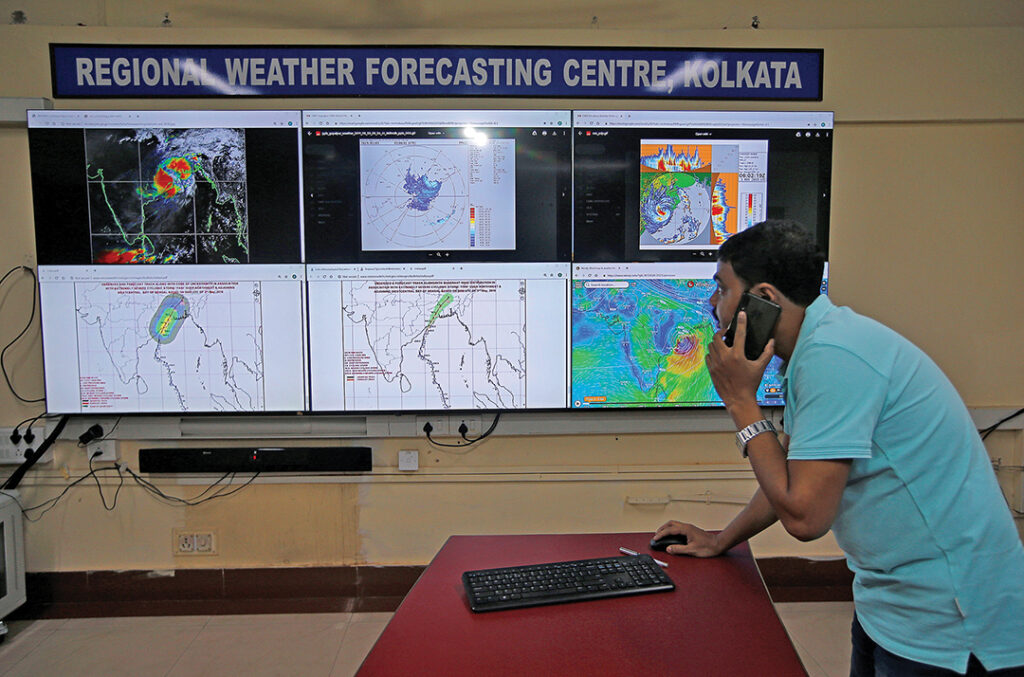 Early warning systems (EWS) use integrated communications systems to help communities prepare for hazardous weather. The systems save lives and jobs, land and infrastructure and support long-term sustainability, according to the consensus of the Global Platform for Disaster Risk Reduction held May 13-17, 2019, by the United Nations Office for Disaster Risk Reduction. The systems can also help public officials and administrators in their disaster planning.

The U.N. and its partners have worked to introduce innovative EWS initiatives in vulnerable areas around the world. In Cambodia, for example, a U.N. partnership with the Regional Integrated Multi-Hazard Early Warning System (RIMES) for Africa and Asia aims to increase Cambodia’s use of environmental information to better inform the populace. RIMES is an international and intergovernmental institution managed by 12 member states: Bangladesh, Cambodia, Comoros, India, Laos, Maldives, Mongolia, Papua New Guinea, Philippines, Seychelles, Sri Lanka and Timor-Leste. RIMES members plan to provide daily weather forecasts and earthquake and tsunami warnings to alert locals.

The purpose of an early warning system is to monitor weather and “environmental data on a real-time basis, detect adverse trends and make reliable predictions of possible impacts,” according to a U.N. report on Cambodia’s early warning systems. “An effective early warning system would enable timely response to natural hazards and extreme weather events, as well as risk-informed development planning.” 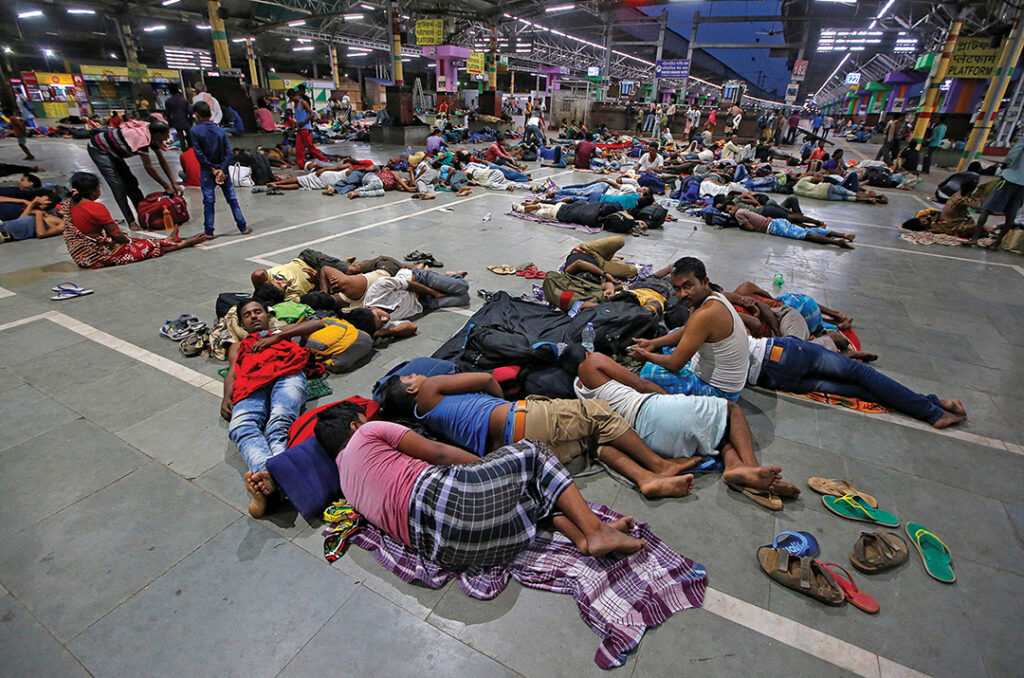 Stranded passengers rest inside an Indian railway station after trains between Kolkata and Odisha were canceled ahead of Tropical Cyclone Fani in May 2019. REUTERS

Low-lying countries and long coastlines across Southeast Asia make the region more vulnerable to increasingly extreme weather conditions. In Cambodia, for instance, floods affected more than 1.7 million people a year in 2013; by 2016, the number had risen to more than 2.5 million, according to the U.N.

“The impacts are devastating, and it is usually the poorest and the most vulnerable who are hit first and worst by storms, floods, droughts, wildfires and rising seas,” U.N. Secretary-General Antonio Guterres said in September 2018.

The Asian Disaster Preparedness Center, an intergovernmental organization working to reduce disaster risks, reported in January 2019 that it was forging transboundary early warning system networks to let neighboring countries input weather data to provide greater information for early warnings to larger populations. Consider communities across the India and Nepal borders. These localities fall into poverty due to the lack of early warnings for upcoming floods, according to “Trans-Boundary Early Warning Systems (TB-EWS) in Asia,” a January 2019 report published by the All India Disaster Mitigation Institute (AIDMI). The report said three out of 10 deaths from transboundary floods occurred because of delayed or nonexistent early warnings. In the context of South Asia’s hazard profile, transboundary hazards are on the rise.

The Koshi River and Narayani-Gandak River basins historically cause flooding in the India-Nepal border region. Locals refer to the two river basins as the “Sorrow of Bihar” because of its history of flood damages. Nepal’s Department of Hydrology and Meteorology upstream and the communities of India’s Bihar state downstream have recently collaborated to develop a people-centric transboundary early warning system, according to AIDMI.

“Community-to-community communications have played an effective and functional role of TB-EWS. This effort also showed that building resilience for at-risk communities through systematic community-based disaster risk reduction and engaging them into TB-EWS can result in high-level participation and vigilance beyond the boundaries.”

Other efforts are underway to connect transboundary communities afflicted by the same disasters, AIDMI reported. “While efforts of strengthening TB-EWS are relatively growing in the past few years, harnessing the lessons from these are important for us to move ahead,” the AIDMI report said. “The gradual connectivity between the TB-EWS and resilience building initiatives are growing, and some good lessons have emerged from these in the past few years’ time.” 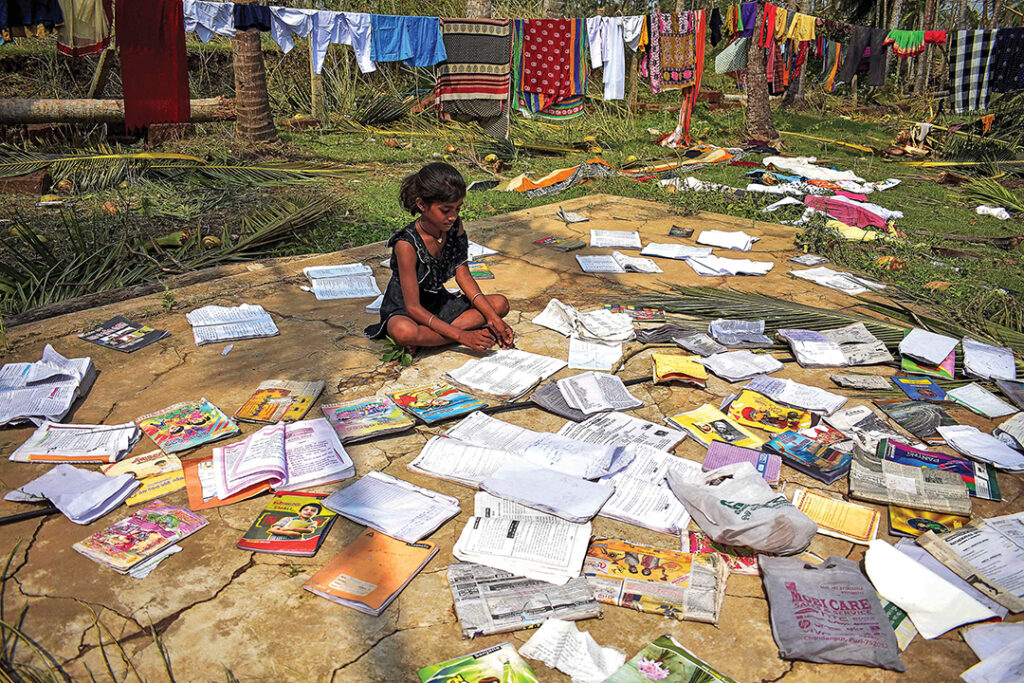 A girl dries her books in Puri in the eastern Indian state of Odisha after Tropical Cyclone Fani passed by in May 2019. AFP/GETTY IMAGES

One such good lesson came out of India and Bangladesh in May 2019 when one of the biggest storms in years bore down on one of India’s poorest states. Tropical Cyclone Fani wreaked havoc on the coastal area in India on May 3, 2019, before moving on to Bangladesh.

With flights canceled and train service suspended, government authorities in Odisha knew the task of moving people to safety would be challenging, but they faced the situation head-on.

Odisha authorities mobilized 43,000 volunteers and nearly 1,000 emergency workers; they warned communities through television commercials, coastal sirens, buses, police officers and the public address system, blaring the warning in simple language and clear terms — “A cyclone is coming. Get to the shelters.” — and they sent 2.6 million text messages, according to The New York Times newspaper.

The Odisha government successfully evacuated 1.2 million people based on their predictions. The death toll stood at 64.

“Few would have expected this kind of organization efficiency,” Abhijit Singh, a former naval officer and head of the Maritime Policy Initiative at the Observer Research Foundation, a research organization, told The New York Times. “It’s a major success.”

Two decades ago, a massive cyclone struck the same region, obliterating villages and killing thousands. Some of the dead were found in post-storm debris miles away from where they had lived, the Times reported.

The sheer devastation and images left a lasting impression on Odisha authorities.

“We have a very serious commitment on this. There should not be any loss of life,” Bishnupada Sethi, the state’s special relief commissioner, who supervised the May 2019 evacuation operation, told the Times. “This is not the work of a day or a month but of 20 years.”

Following the major cyclone in 1999, Indian officials built hundreds of cyclone shelters along the coast, and they have stood the test of time and storm.

“The government is usually dysfunctional in cases like this, but the whole mobilization was quite impressive,” Singh, the former naval officer, told The New York Times. “Evacuating a million people in three or four days and providing them with not just shelter but also food is a big achievement in such a short time.”

Odisha has a community outreach system for notifying people and a network of 450 cyclone shelters, each with a maintenance committee in which youths have been trained for search and rescue, first aid medical attention and providing cyclone warnings, according to Deepak Singh, lead disaster risk management specialist at the World Bank. He said the World Bank helped create the intelligence to carry early warnings to the last mile. That system has been in use in Odisha for the past 12 years, he said.

Because of its vulnerable location, Odisha experiences a cycle every two years, Deepak Singh said. So much disaster means more opportunities for the government of Odisha to learn and improve its early warning system as the community strives for zero loss of life during such storms.

“Every small cyclone or tsunami teaches you how to deal with the bigger ones,” Krishan Kumar, an officer in the Khordha district of the Odisha government, told The New York Times, saying his government’s successful May 2019 evacuations highlight an accumulation of knowledge. “If you don’t learn from the past experiences, you will drown.”