Japan’s Self-Defense Forces Ready to Save Lives, Contribute to Peace

Abe delivered this speech in October 2018 to troops.

I am very pleased to observe the troop review here in Asaka for the third time and have an opportunity to witness the valiant members of the Self-Defense Forces (SDF).

As I begin my remarks, I pray for the repose of those who lost their lives in the series of natural disasters that struck Japan during the summer of 2018. I also express my sincere sympathies to all those affected by these disasters. 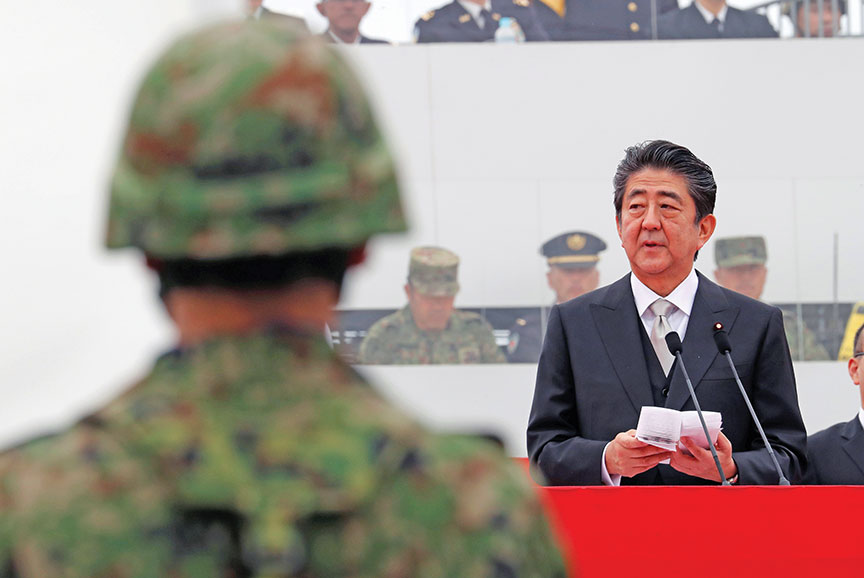 No matter what the disaster, you and your colleagues were always there.

Houses were flattened by landslides. You responded to these reports, making your way to the scene tirelessly, despite having to surmount fallen trees and becoming bogged down in mud on the way to the disaster-stricken sites. Almost at the point of exhaustion, you used every last ounce of strength to rescue all of the victims as their families looked on.

“We wouldn’t expect anything less from the SDF.” These words from people affected by the disaster are yet another testament to your abilities and, above all, your superb determination.

In fact, the SDF has been dispatched for disaster relief missions over 40,000 times.

This is not only for cases of natural disasters. Under such circumstances, that a moment cannot be wasted to save the lives of medical patients on remote islands, the provision of emergency transportation is indeed a lifeline for the people.

It was 11 years ago that Naha Air Base received a telephone call with a report of a woman who had fallen ill and was in a precarious state. Without hesitation, a four-person crew led by Col. Yoshitomo Tatemura boarded a helicopter and flew off into the pitch-black night, headed for Tokunoshima in Kagoshima Prefecture.

Once there, they were surrounded by heavy fog and were unable to make out the landing site. The low-hanging clouds were obstructing their approach.

With the woman’s condition worsening and no time to lose, Col. Tatemura continued to try to land, harnessing the more than 4,800 hours of flight time he had accumulated and all of his experience as a member of the SDF. Until the very end, he never gave up, asking the ground controller to make landing arrangements for nearby Tokunoshima Airport and continuing to take all possible actions. In response, the SDF personnel on the ground did everything they could as well.

Those words of gratitude to the ground controller were Col. Tatemura’s last. The four-person crew never returned to base. Col. Tatemura is said to have once told junior personnel the following: “If we don’t do it, who will?” 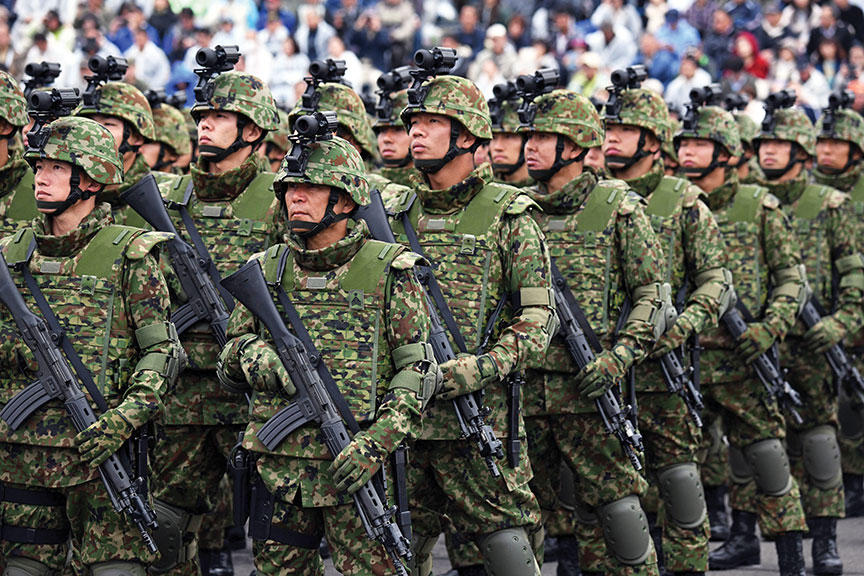 Soldiers from the Japan Ground Self-Defense Force take part in a military review at their training ground in Asaka, Saitama prefecture. Getty Images

Japan and its people are protected by the strong sense of duty and responsibility of each of the 250,000 members of the SDF.

“In case of emergency, I would strive to complete duties, which might put myself in danger, as entrusted by the nation.” [Part of the Oath of Service taken by newly recruited SDF officials.]

I wish to once again express my sincere respect for your noble determination.

Those SDF personnel, who maintain surveillance on the front lines amid extremely tense circumstances, 24 hours a day, 365 days a year, scrambling jets when necessary to protect the lives of the people and maintain peace are the ones who secure the vast waters and airspace of Japan, even now, at this very moment.

To ensure the peace of Japan and lay the foundation for peace and prosperity in the Indo-Pacific region, and to ensure the complete implementation of the United Nations Security Council resolutions related to North Korea, those personnel are working closely with like-minded countries such as the United States, the United Kingdom, Australia, Canada and New Zealand and conducting maritime surveillance activities to prevent illegal ship-to-ship transfers.

You who have chosen to follow this difficult path of your own volition, who devote yourselves to carrying out your duties, all for the sake of your fellow citizens, you are the pride of Japan.

Thoroughly protecting territorial land, sea and air as well as the lives and property of the citizens is the greatest duty of government. Our ceaseless efforts are the foundation of security policy; nowhere is there any possibility to stop and rest.

In just over five years, the security environment surrounding Japan has become increasingly uncertain at a pace far faster than before and has become severe.

At present, the paradigm of security policy is also shifting significantly. Unless we establish competitive advantages in new areas such as space, cyberspace and electromagnetic spectrum capabilities, we will no longer be able to thoroughly protect our country.

The new National Defense Program Guidelines [published in mid-December 2018] present a new vision of defense capabilities that will not be a mere extension of the status quo but will instead build a foundation lasting several decades into the future.

I ask each of you to keep your eyes on the ever-changing international conditions and technological trends as well as to exert your efforts tirelessly toward the ideal, without settling on conventional methods or ideas.

As the commander in chief of the SDF, I am determined to exert every effort to resolutely protect the lives and peaceful livelihoods of the people and hand them down to the next generation.

The peace which Japan enjoys cannot be protected by any single country alone. Hoisting high the banner of “proactive contribution to peace,” Japan is determined to contribute more greatly than ever before to the peace and prosperity of the world, in ways that only we are capable of.

In Indonesia, which was struck by an earthquake with a magnitude of 7.4 and subsequent tsunamis, 49 members of the SDF, dispatched by C-130 transport aircraft, worked tirelessly to preserve the lives of people affected by the disaster.

Off the coast of Somalia and in the Gulf of Aden, the SDF is exerting every effort, together with personnel from other countries, to secure sea lanes for the peace and prosperity of the international community.

One woman who took part in the program is from Sierra Leone. Sierra Leone is now a country actively assisting with nation building of its fellow African countries; until recently, it was ravaged by an intense civil war. Finding herself at the front lines, she had no choice but to take up arms and fight in the war as a Soldier.

After coming to Kenya, she first trained in literacy skills, learning to read and write under the guidance of the SDF. While educating herself in various subjects, she also mastered the operation of heavy-lift cranes. When it was finally time for her to return to her homeland, she said, “I am truly happy to be able to contribute to peace.”

She, as well as the other participants, will use the skills they learned from Japan to build infrastructure such as roads and bridges. Such infrastructure will surely end up being used by many people and bringing smiles to the faces of children.

The “seeds of peace” that Japan’s SDF have planted in Africa are destined to one day blossom as large flowers. The people the SDF has trained will surely shoulder the peaceful future of Africa and preserve the peace and prosperity of the world.

I ask that you continue to exert every effort for the peace and stability of the international community with great pride. I have strong faith in you.

Today, 90 percent of the Japanese people regard the SDF with respect. In its history spanning more than 60 years, however, there was a time when the existence of the SDF was viewed harshly. Nevertheless, the members of the SDF gritted their teeth and devoted themselves wholeheartedly to fulfilling their duties.

You have truly earned the trust of the people through the work of your own hands.

Now it is time for politics to fully play its part as well.

It is the responsibility of politicians of today to create an environment that enables all members of the SDF to fulfill their duties with great pride. I am determined to resolutely fulfill this responsibility.

To the families of the SDF members, it is none other than you who galvanize the courage of the SDF members and inspire them to carry out their missions with a strong sense of duty, of course in their day-to-day training and also in trying circumstances.

As commander in chief, I wish to express my heartfelt gratitude for letting your precious partners, children, fathers and mothers serve in the SDF.

To the members of the SDF, the Japanese people and I will always stand united with you. Keeping that in mind, please carry out your duties as an SDF member with pride and confidence.

As I conclude my remarks, I would like to extend my sincere hope that you will always stay mindful of the importance of your duties, conduct yourselves with integrity, and work with ever greater diligence to secure the peace and stability of Japan and the world.

Japanese Prime Minister Shinzo Abe, commander in chief of the Self-Defense Forces, delivered this speech on October 14, 2018, during a troop review for the anniversary of the establishment of the SDF. It has been edited to fit FORUM’s format.