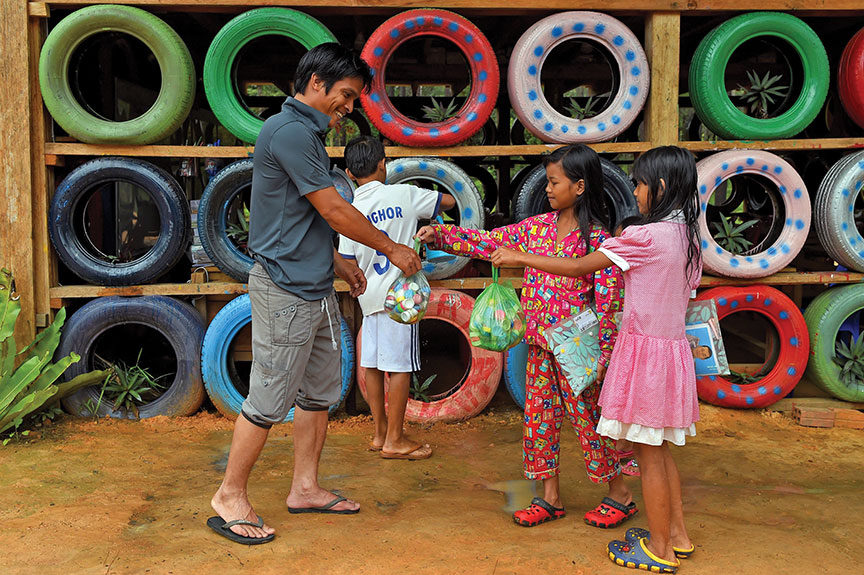 Sitting in a building made from used tires, plastic bottles and other recyclables, Cambodian student Roeun Bunthon jots down notes during an English lesson at the “Rubbish School” where tuition is paid for with trash instead of cash.

In return, needy kids like Bunthon, a former street beggar, can take computer, mathematics and language classes — and learn the value of reducing waste in a notoriously polluted country where recycling is nearly nonexistent.

“I’ve stopped begging. … It’s like I have another chance,” said Bunthon, who paid for his enrollment with a bag of discarded bottle caps.

Located in a lush national park, the Coconut School is built almost entirely from recycled waste and is the brainchild of Ouk Vanday, nicknamed “the Rubbish Man,” a former hotel manager who dreams of a trash-free Cambodia.

About 65 kids are enrolled at the school, where classroom walls are made of painted car tires and the entrance is adorned with a mural of the Cambodian flag made entirely from colorful bottle caps.

Most of that garbage came from students in the form of school fees.

“I use rubbish to educate children by turning garbage into classrooms … so the children will understand the value of using rubbish in a useful way,” the 34-year-old said at the school, which opened in 2017 about 115 kilometers west of Phnom Penh.

He plans to expand classes in the poor, agricultural province of Kampong Speu to accommodate 200 kids, with a new kindergarten class set to open in 2019 and featuring a wall made from plastic bottles. He is optimistic the young minds are environmental ambassadors in the making.

“We hope they’ll become new activists in Cambodia, understanding the use, management and recycling of waste,” Vanday said.

Vanday was inspired after traveling around Cambodia and seeing tourist sites clogged with garbage. Troubled by this, he set up a pilot project in Phnom Penh in 2013 before expanding it to a second location in the national park.

Vanday’s vision for a trash-conscious Cambodia is ambitious in a Southeast Asian country where plastic bags and bottles are tossed out without a second thought, many ending up in garbage-choked cities or smothering once-idyllic beaches.

Cambodia accumulated 3.6 million tons of waste in 2017, according to the country’s Ministry of Environment.

A mere 11 percent gets recycled, while almost half is burned or thrown into rivers, causing widespread pollution, said ministry spokesman Neth Pheaktra.

The rest is trucked to ever-growing landfills and dump sites, where the piles of garbage emitting methane gas can lead to fires, as well as add to climate change.

These grim scenes are what inspired Vanday to found the Coconut School, which is supported by donations and volunteer teachers, for kids who would get little in the way of environmental education at regular state-run schools.

It is also a chance to help kids who would not be able to afford the after-school programs that have become commonplace for most youngsters across Cambodia.

Public education is free by law, but “supplemental” lessons for English or other extracurricular subjects cost extra, ranging from U.S. $5 a class to hundreds of dollars, depending on the school and its location. This could be a steep investment in a country where the average person earns less than U.S. $1,400 per year.

For poorer families in remote areas, the children are sent to beg for money to increase their family income, making it difficult for them to justify paying for extra classes. At his school, Vanday wishes to put an end to this practice. It has already worked for some.

“My English teacher doesn’t let me beg for money or gamble,” 10-year-old former beggar Sun Sreydow said. “I’m glad. When I grow up, I want to be a doctor.”