Australia’s Role in the Indo-Pacific

Building foundations for success across the region

Australia’s 2017 Foreign Policy White Paper, in tandem with the 2016 Defence White Paper, made clear how Australia sees its future. The 2017 white paper emphasized building “foundations for success” — strong domestic, diplomatic, defense and national capabilities and the provision of assistance abroad to ensure a stable and prosperous world.

It mapped a framework for opportunity — to “promote an open, inclusive and prosperous Indo-Pacific region in which the rights of all states are respected.”

The white paper reaffirmed that our alliance with the United States remains fundamental to Australia’s future. Moreover, it stated that without strong U.S. engagement in this region, power may shift, and Australia will find it more difficult to achieve the levels of security and stability we seek.

To our region, the U.S. Indo-Pacific Command is a potent symbol of what U.S. Vice President Mike Pence said in November 2018: “Our message is simple: The United States’ commitment to the Indo-Pacific is steadfast and enduring.”

Our region is far from simple or benign. It is characterized by fast-paced change and shifts in geoeconomic weight and power. By some measures, China now produces more than the U.S. India is the world’s fastest-growing major economy. Indonesia looks set to become a top 5 global economic power by 2030. Many countries — China, Japan, India and others — are building increasingly powerful military forces. They are positioning within the global architecture to match their economic power. Competition is intensifying over maritime and land borders, sea and airspace and over regional economic integration. The international order built since World War II is being contested. 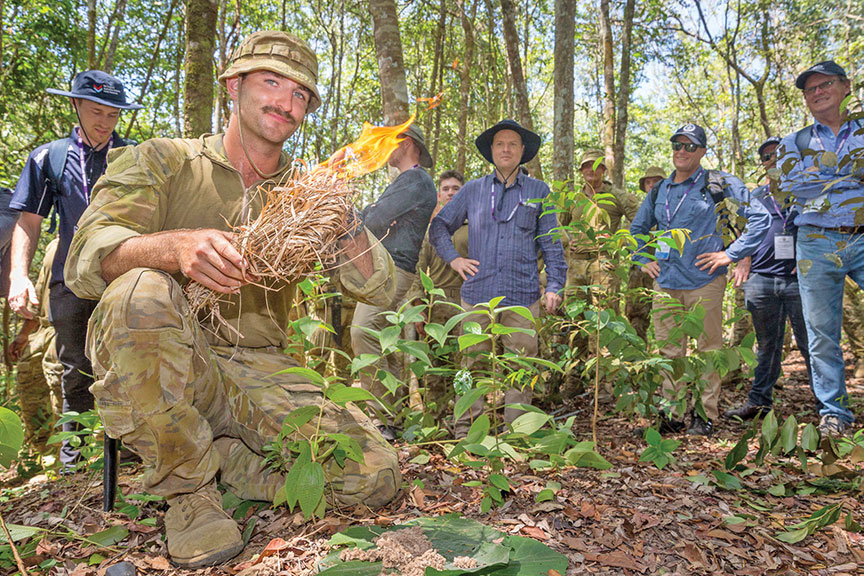 In the midst of such change, Australia’s values are enduring. We are one of the oldest democracies and the most successful of multicultural societies in the world. Our commitment to those values and the institutions that uphold them gives us confidence and credibility.

Australia seeks to shape an Indo-Pacific region free of coercion, abounding with opportunities for all and based on clear and fair rules. Based on these values, Australia is ramping up practical, long-term activities with our regional partners.

The new Australian initiatives outlined below are based on decades of engagement in our neighborhood. They cover multiple areas — from patrol boats to infrastructure to strategic dialogues, sports, education and cyber. They involve partnerships through many channels, including bilateral, multilateral, governmental, nongovernmental and communities of shared interests.

In November 2018, world attention was on our closest geographical neighbor, Papua New Guinea. Port Moresby was host to the 21-member economies of the Asia-Pacific Economic Cooperation (APEC) forum. APEC was an idea that was stood up in 1989 by Australia’s prime minister, with South Korea and Singapore. Since then APEC has doubled — it now represents countries that produce more than half of the global gross domestic product.

Over 30 years, with the Association of Southeast Asian Nations (ASEAN) and partners, we have built other planks of the regional architecture, such as the East Asia Summit, the ASEAN Regional Forum, the ASEAN Defense Ministers Meeting-Plus and major trade pacts encompassing the Pacific Rim and India. This architecture reflects the unique history, geography and diversity of our region. So, too, do the myriad new initiatives we are developing across the Indo-Pacific.

Engagement Across the Indo-Pacific

The Australian government has long recognized the rising economic power of India and recently released a blueprint to transform bilateral economic engagement. India and Australia hold regular 2+2 foreign and defense meetings, a maritime dialogue and other security-related consultations.

We have established a dialogue with India, the U.S. and Japan that is becoming an important part of our regional diplomacy. In 2019, Australia’s major annual maritime activity Indo-Pacific Endeavour (IPE) focuses on the Indian Ocean. IPE is a joint service activity that promotes Australia’s defense priorities, including our support for regional architecture, and to reinforce our commitment to enhancing maritime security cooperation with regional partners.

Since our involvement in the Korean War and aftermath, Australia has forged a close economic and strategic partnership with South Korea. Australia continues to diplomatically and materially contribute to efforts to manage the threat posed by North Korea’s development of nuclear weapons and delivery systems. Ensuring stability and security in northeast Asia remains a key aim in Australia’s Indo-Pacific strategy.

With Japan, Australia has a special strategic partnership and multiple other bilateral, trilateral (with the U.S.) and other multilateral initiatives.

Quite clearly, the role of China will be a key determinant of stability and prosperity in the Indo-Pacific and will shape the future strategic contours of our region. Australia’s bilateral relationship with China is one of our most consequential.

Notwithstanding our distinct perspectives on some issues, we are clear-eyed about the opportunities as well as the challenges. We seek to cooperate with China on initiatives that serve to uphold the rules-based order and contribute to regional stability.

Australia has a key interest in a positive defense relationship with China that enhances mutual understanding, fosters transparency and builds trust. To that end, China — along with other partners — participates in bilateral and multilateral Australian military exercises. 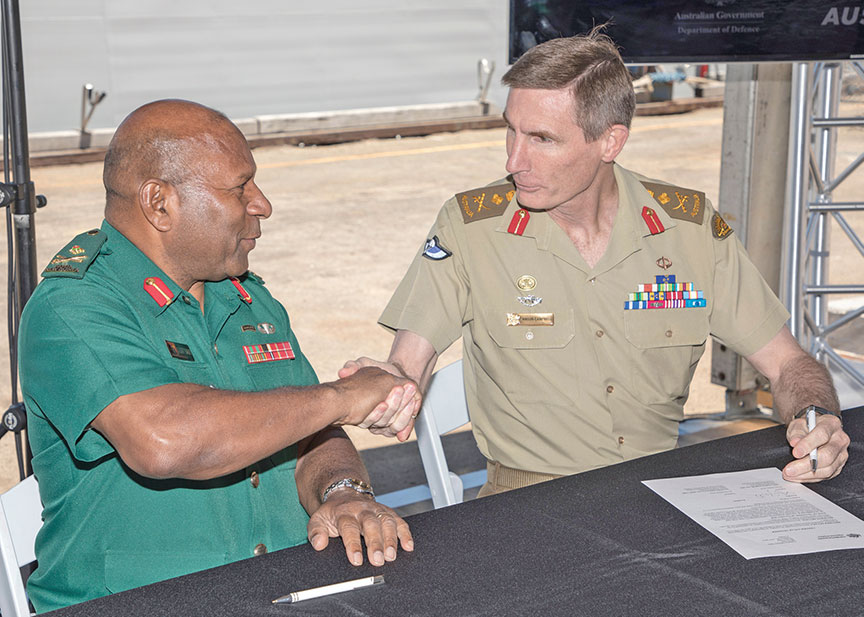 In the 1940s, Australia opened diplomatic missions across Southeast Asia. We now have formal strategic partnerships that underpin our relationships with Malaysia, the Philippines, Singapore and Vietnam. We have dialogues with Burma, Cambodia, Laos, Thailand and Timor-Leste.

Australia and Indonesia recently elevated our bilateral relationship to a comprehensive strategic partnership — the highest level of nonaligned relations. Australia and Indonesia are working closely to combat terrorism and violent extremism. Our security cooperation extends across law enforcement, intelligence, law and justice.

After pro-Islamic State of Iraq and Syria (ISIS) militants attacked Marawi City in the Philippines in 2017, the Australian Defence Force (ADF) AP-3C Orion surveillance supported the Armed Forces of the Philippines’ (AFP) operation to liberate Marawi. Since liberation, ADF Joint Task Group 629 has undertaken a counterterrorism cooperation program with the AFP. To date, we have engaged over 7,000 AFP personnel, sharing ADF experiences and approaches to complex terrorist tactics that have transferred from the Middle East to our region.

Australia has supported the Philippines’ recovery and long-term peace-building efforts with Australian Partnerships for Peace, an AUS $12 million program is being implemented through international and local nongovernmental organizations.

Australia has memoranda of understanding on counterterrorism with most of our Southeast Asian neighbors and with other Indo-Pacific partners, including Fiji, India, Pakistan and Papua New Guinea.

Australia is proud to be ASEAN’s longest-standing dialogue partner. The 2018 ASEAN-Australia Special Summit announced that Australia and ASEAN will implement a package of initiatives to strengthen civil maritime and border protection, maritime domain awareness, maritime law and its applications, and the protection of regional fish stocks.

In November 2018, Australia announced a Southeast Asia Economic Governance and Infrastructure Initiative to help unlock our region’s next phase of growth. Australia’s Greater Mekong Water Resources Program will support more equitable and effective water resource management. And we will deepen creative and educational links with a program aimed at young people across all 10 ASEAN countries.

Australia recently announced a package of initiatives in the Southwest Pacific to take our engagement to a new level. The Southwest Pacific is at the front and center of our foreign policy and strategic outlook. The ADF already plays a pivotal role in our Pacific engagement, and it will play an even greater role in coming years.

Under Australia’s Pacific Maritime Security Program (PMSP), we will deliver more capable patrol boats and aerial surveillance to enhance information sharing to track drug trafficking, people smuggling and illegal fishing. The PMSP is a commitment of AUS $2 billion over 30 years and includes 21 Guardian-class patrol boats — 19 to Pacific island countries and two to Timor-Leste.

With Fiji, Australia is turning the Blackrock Peacekeeping Humanitarian Assistance and Disaster Relief Camp into a regional hub for police and peacekeeping training.

Australia and Papua New Guinea (PNG) have announced a major joint initiative at PNG’s Lombrum Naval Base in Manus province. U.S. Vice President Mike Pence announced during APEC that the U.S. will also be a partner in this. Development of Lombrum will further enhance our interoperability, deepen our maritime security cooperation and complement Australia’s PMSP.

Continuing momentum generated during preparations for APEC, Australian and PNG police will work together to improve the delivery of policing services to the PNG community.

Australia will establish an enduring rotational ADF Pacific Mobile Training Team. Based in Australia, it will travel across the Pacific when invited to train and engage with other forces.

The Royal Australian Navy will undertake more deployments to the Pacific to conduct maritime training and exercises with our neighbors — including with the new Guardian-class patrol boats.

Through these initiatives, the ADF will work closely with our partners, building interoperability in engineering, medical services, communications, surveillance, logistics, maritime support and planning.

We are deepening our support for economic development in a way that addresses the unique infrastructure challenges of the Southwest Pacific.

The Australian Infrastructure Financing Facility for the Pacific will mobilize AUS $2 billion in grant funding and loans for projects in sectors such as telecommunications, energy, transport and water. This will be complemented by a proposal to provide Australia’s export financing agency, known as Efic, with an additional AUS $1 billion in callable capital and a more flexible power to support investments.

Our personal ties extend to deeply shared obsessions. Anyone who visits the South Pacific will witness the passion for sport. A new Australia-Pacific sports program will extend our sports cooperation and deepen our people-to-people relationships.

A new church partnerships program will enhance links between Pacific and Australian churches.

Understanding the importance of quality education in improving economic prospects, we will fund a new secondary scholarships package to support Pacific students to attend Australian schools.

We are also ramping up the Pacific labor scheme and seasonal worker programs to ensure flows of people and economic opportunity.

We are also developing the Australia Pacific Security College to strengthen capability and networks among senior officials in the Southwest Pacific.

Australia and New Zealand will work with regional partners to enhance cyber resilience. Australia is investing AUS $38.4 million to 2022 through our regionwide Cyber Cooperation Program, a cyber cooperation partnership with PNG, and other projects. These will strengthen cyber crime prevention, prosecution and cooperation and enhance cyber incident response capability.

The Boe Declaration highlighted climate change as the greatest security challenge to PIF member countries. Australia remains a steadfast partner in supporting regional responses to a changing climate and disaster resilience and has committed to spending at least AUS $1 billion over five years on climate change in developing countries, including an AUS $300 million four-year regional assistance package.

Australia seeks cooperation with all countries that have a stake in the Indo-Pacific. Our challenge is to ensure that our efforts combine to build a secure, stable, open and prosperous region. These are our values.