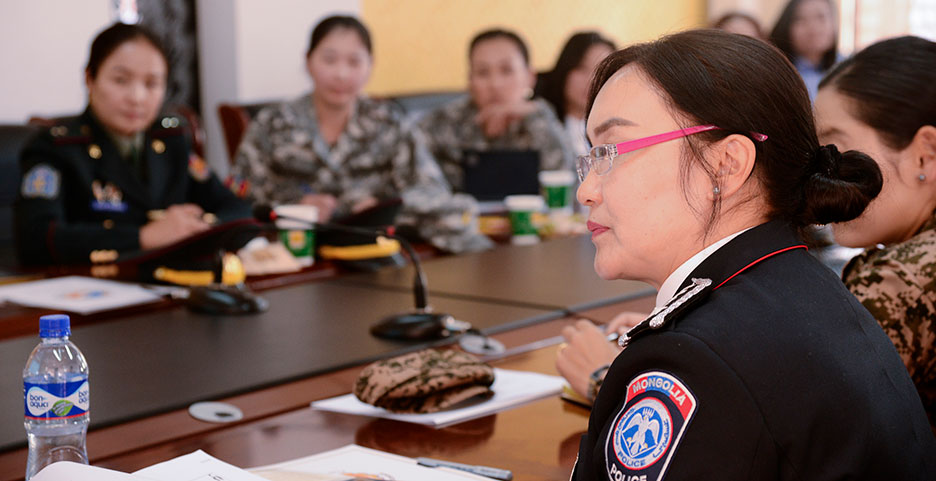 Women in Mongolia are changing the world — one province at a time, according to participants of a mentoring and leadership program for women conducted in Sainshand, Mongolia, as part of the Mongolian government’s and U.S. Army Pacific’s (USARPAC’s) Gobi Wolf Exercise 2019.

To strengthen women’s roles, USINDOPACOM and USARPAC brought together 23 women from across Mongolia for the Women’s Mentorship Program (WMP) with U.S. military officers during the week of September 16-20, 2019. WMP participants collaborated to ensure that a gender perspective and consideration for vulnerable populations are included in Mongolian disaster response, mitigation and management efforts. (Pictured: Mongolian and U.S. women participate in the U.S. Army Pacific’s Women’s Mentorship Program during Gobi Wolf in September 2019.)

Gender disparity, especially in senior-level decision-making processes and institutions, is not unique to Mongolia or the United States. It is a worldwide phenomenon, according to the United Nations. When a society includes and invests in its entire population — in responding to disasters, in countering crime, in preventing violent extremism, in defending against internal and external threats, in contributing to the economy — that society will be safer and more secure, Wood said.

The mentoring program included participation in the command post exercise in which the women applied their knowledge of gender and vulnerable populations during an earthquake disaster scenario. Natural disasters are not gender neutral, and successful planning and response activities benefit from understanding how gender, age, ethnicity, economic class and other factors affect an individual’s experience during disasters, as well as rescue and recovery, Wood said.

WMP overlapped with a two-week leadership training held September 9-20, 2019, in Ulaanbaatar, Mongolia’s capital, titled the “Rural Women Changemakers Program.” That program was run by the Zorig Foundation and brought together 21women from Mongolia’s 21 provinces.

The changemakers program is designed to effect real change — to build human capacity in rural areas, prepare the participants to access leadership roles and help identify solutions to local gender issues in their rural communities.

It is “an opportunity to have real impact on the ground,” Munkh-Achit said.

Both programs directly support the heart of United Nations Security Council Resolution 1325 on Women, Peace and Security (WPS). The resolution passed unanimously in 2000, and nations across the world agreed — peace lasts longer when women meaningfully participate. Next year the resolution turns 20 years old, and Mongolian women are well on their way to accomplishing its vision, WMP participants said.

“Let the eve of the anniversary of 1325 not be an eve of commitment but rather an eve of unprecedented action on women, peace and security wherein the ultimate goal is to end the business of war,” Mavic Cabrera-Balleza, CEO of the Global Network of Women Peacebuilders, said at an event during the 74th U.N. General Assembly in late September 2019, according to the unwomen.org website.

A key challenge is to ensure that energy and resources around the anniversary are channeled toward actions that will have the greatest impact, Jacqueline O’Neill, Canada’s WPS ambassador, said at the event, the website reported.

“When we talk about representation in leadership, it’s very important to remember that imparity in leadership is a testament to our failures to ensure equal opportunities to women and men and people of all genders,” Icelandic Prime Minister Katrín Jakobsdóttir said at a related event, unwomen.org reported.

During Gobi Wolf 2019, WMP participants shared not only their excitement around the WPS agenda and its critical connection to disaster preparedness and response but also expressed a desire for future related trainings, a sentiment echoed by Zorig Foundation participants. Programs such as WMP and the Rural Women Changemakers provide a fresh yet essential perspective to Mongolian policy, they said.

Gender is cross-cutting whether a nation faces natural disasters or broader economic, peace and security issues, participants agreed. Mongolian women understand that investing in these different perspectives will lead their country, the region and the world to a more secure future.

“We were dependent on men. [Now] we are more independent; we can say everything. We can have our own ideas and plans. Before, we were like satellites,” Luvsan Erdenechimeg, a former member of the Mongolian parliament, said according to the Women’s International League for Peace and Freedom website.