India and Indonesia build a stronger connection for security

Though India and Indonesia have long historical and cultural linkages, strategic partnership has been a recent development. The two share multiple concerns, one of which pertains to the People’s Republic of China’s (PRC’s) rapid rise and its intentions in the maritime theater. Since 2014, the government of Indian Prime Minister Narendra Modi has been trying to boost India’s ties with many Southeast Asian countries as part of its Act East Policy, which was manifest in his visit to Indonesia in late May 2018 ahead of his first-ever speech at the Shangri-La Dialogue in Singapore.

India, no longer content to merely look east, wants to be an active contributor to the regional balance of power by acting east. Although it is not India’s role to dictate the nature and scope of Indo-Pacific cooperation, through discussion and experimentation, India can find areas where increased cooperation will serve mutual security interests. In the words of Luhut Pandjaitan, Indonesia’s minister for maritime affairs, “India and Indonesia relations are important to the balance of power in Asia.” Clearly, Indonesia is equally keen to ensure that the PRC is effectively prevented from moving ahead on its current antagonistic trajectory.

The Modi government’s attempt to connect India to its traditional maritime neighborhood, particularly in the Indo-Pacific, is aimed at sustaining a rules-based liberal international order by ensuring free movement of people, goods and services through the Strait of Malacca, one of the busiest shipping routes between the Indian and Pacific oceans. The freedom of navigation, availability of port infrastructure and unhindered access to markets are mandatory for this purpose. Hence, the major focus of Modi’s visit to Indonesia was to highlight that the two countries are close maritime neighbors. Modi and Indonesian President Joko “Jokowi” Widodo agreed to elevate the India-Indonesia relationship to a comprehensive strategic partnership. Their joint statement emphasized the “importance of achieving a free, open, transparent, rules-based, peaceful, prosperous and inclusive Indo-Pacific region,” which would uphold “sovereignty and territorial integrity, international law, in particular UNCLOS [United Nations Convention on the Law of the Sea], freedom of navigation and overflight, sustainable development.” 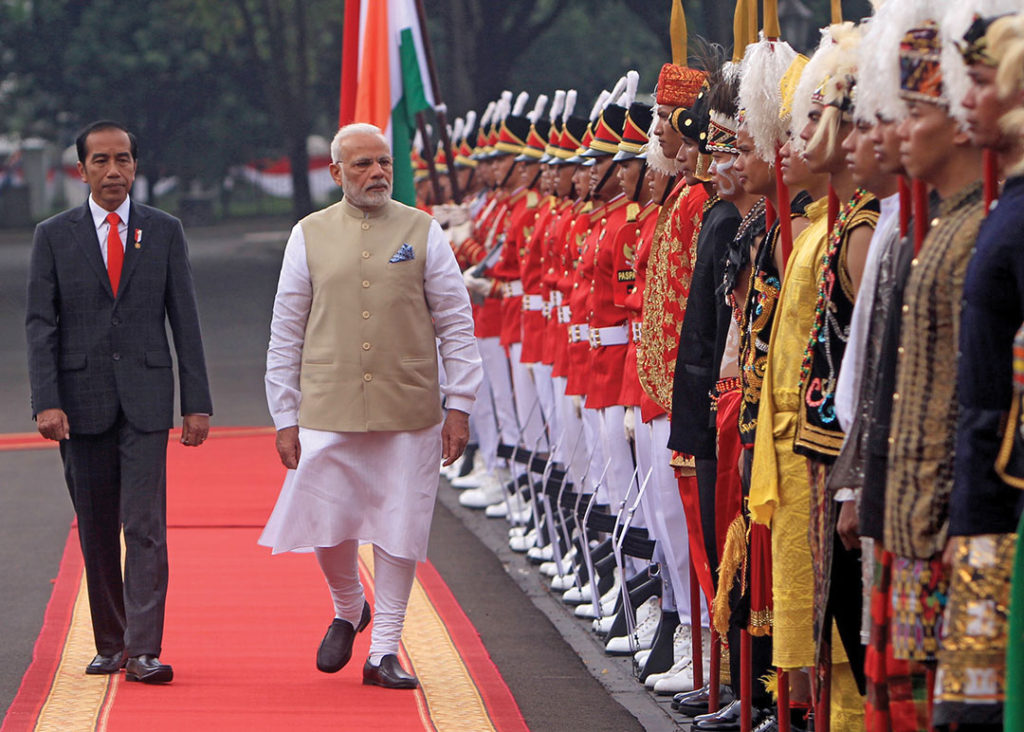 Jokowi, meanwhile, seeks to transform Indonesia into a maritime power and is passionate about maritime sovereignty for his country. Hence, repeated assertions about protecting freedom of navigation are unmistakably targeted at the PRC, which is engaged in hotly contested territorial disputes in the South and East China seas. Jakarta claims it is not a party to any territorial disputes with Beijing in the South China Sea; however, Indonesia has not hesitated in clashing with the PRC over fishing rights around the Natuna Islands. Jokowi’s dramatic gesture of holding a cabinet meeting aboard a warship off the Natunas just days after a Sino-Indonesian naval skirmish in 2016 was seen as a show of resolve toward the PRC.

Indonesia is not as bitterly opposed to the PRC-led One Belt, One Road Policy as India, but Indonesia is also not as supportive as the PRC expects. After their meeting, Modi sought to link India’s Act East policy and Security and Growth for All in the Region with Jokowi’s ambitious maritime fulcrum policy.

In the past, India-Indonesia maritime cooperation has remained largely confined to coordinated bilateral patrols, anti-piracy patrols and search-and-rescue exercises. It is thus important for them to move to a more intensive engagement, as together they control the entry point from the Bay of Bengal to the Strait of Malacca. India’s interest in joining the Malacca Straits Patrol (MSP) — a four-nation arrangement with Indonesia, Malaysia, Singapore and Thailand — should be seen in this context. However, Indian participation is easier said than done. A meeting among technical experts in May 2018 in Bali explored the issue but soon revealed that the Indian side did not have full comprehension of the operational nuances of MSP. Since no forward movement seemed possible, the Modi-Jokowi joint statement merely noted that the May 2018 meeting was “to explore ways in enhancing strategic technical cooperation on maritime security.”

Indonesia is the de facto leader of ASEAN. As the security environment in the region is increasingly exacerbated by U.S.-PRC rivalry, Jakarta wants ASEAN to be at the center of the conceptualization and evolution of the Indo-Pacific region. Jokowi has been outlining the Indonesian conception of the Indo-Pacific as “open, transparent and inclusive, promoting a habit of dialogue, promoting cooperation and friendship and upholding international law.” Modi’s Indo-Pacific vision sounds strikingly similar. He has indicated that India is keen to preserve a free and open regional security architecture in Asia with “ASEAN centrality,” and even without American leadership.

New Delhi has thrown its weight behind working with the United States, Japan and Australia to counterbalance rising Chinese geoeconomic and geopolitical assertiveness. In its quest to reshape the Indo-Pacific balance of power, India continues to pursue a hedging approach by engaging directly with the PRC as well as seeking to contain its behavior.

Strategically, Indonesia is equally important to the United States and the PRC because it straddles vital Indo-Pacific chokepoints. Jakarta has secured Chinese investment without showing any evidence of a tilt toward the PRC. Being one of the very few countries in the region that has the capability and credibility to make significant contributions toward countering Chinese assertiveness, Jakarta now reckons New Delhi as a credible strategic partner.

Modi signed a deal with Jokowi allowing India access to northern Sumatra’s Sabang port, enhancing the Indian Navy’s ability to maintain a forward presence in the Malacca Strait. The PRC is not oblivious to its implications. A day ahead of Modi’s trip to Indonesia, China’s state-run Global Times newspaper asserted that the PRC would not “turn a blind eye” if New Delhi sought “military access to the strategic island of Sabang,” advising India not to “wrongfully entrap itself into a strategic competition with China and eventually burn its own fingers.”

Given the irreversible geopolitical shifts, the Indo-Pacific has emerged as one of the major hotbeds of global power politics. India’s emerging consensus with Indonesia, as reflected in the elevation of their relationship to the level of a comprehensive strategic partnership, can provide a basis for a closer engagement between the countries to further develop the Indo-Pacific concept. Delhi and Jakarta have agreed to take concrete steps to accelerate economic and security cooperation in the maritime domain. The renewed awareness that they are close neighbors sharing broadly common challenges regarding sustainable use of the oceans makes it imperative for them to contribute more to the maintenance of regional security in the Indo-Pacific. The challenge for Modi and Jokowi will be to institutionalize maritime cooperation so the Indo-Pacific becomes truly free, open and inclusive.

Vinay Kaura is an assistant professor of international affairs and security studies and is the coordinator of the Center for Peace and Conflict Studies at Sardar Patel University of Police, Security and Criminal Justice in Rajasthan, India. This article was originally published in Asia Pacific Bulletin No. 437, which is produced by the East-West Center. The views expressed here are the author’s alone and do not necessarily reflect the policy or position of the East-West Center or any organization with which the author is affiliated. The article has been edited to fit FORUM’s format.