The Indo-Pacific’s human trafficking record contains highs and lows. While home to some of the worst offenders — including North Korea and Burma — the region also has success stories with several countries implementing recent laws and programs to combat these horrific crimes.

“Human trafficking is a global phenomenon to which no country is immune,” according to the U.S. Department of State’s Trafficking in Persons Report 2018. “Victims of modern slavery are exploited in every region of the world, compelled into service for labor or commercial sex in the real world of industry and on the pages of the internet. The enormity of the problem necessitates the development of a unified, comprehensive response from world leaders to collectively address a crime that defies all borders.”

Data fluctuate year to year due to the hidden nature of trafficking crimes, shifts in government efforts and lack of uniformity in reporting structures. Most figures, however, suggest that 36 million people worldwide are victims of human trafficking. Nearly two-thirds of them have ties to the Indo-Pacific region.

“Human trafficking is one of the most tragic human rights issues of our time,” Rex Tillerson, then-U.S. secretary of state, said in a letter marking the release of the Trafficking in Persons Report 2017. “It splinters families, distorts global markets, undermines the rule of law, and spurs other transnational criminal activity. It threatens public safety and national security. But worst of all, the crime robs human beings of their freedom and their dignity. That’s why we must pursue an end to the scourge of human trafficking.” 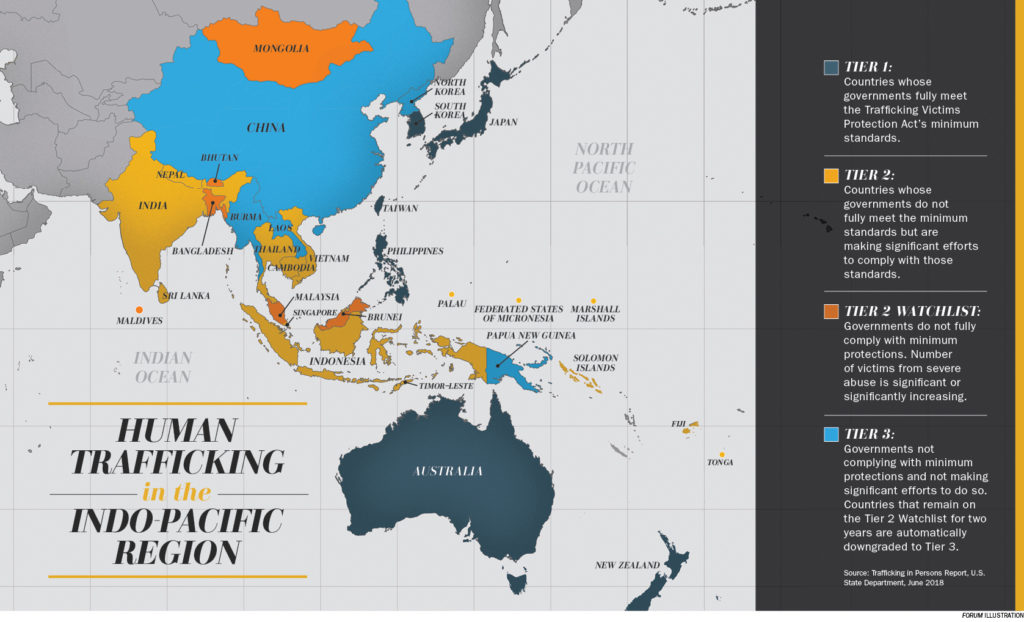 Multilateral and regional organizations have worked to foster a consensus to create common goals, commitments and norms to combat trafficking. The Association of Southeast Asian Nations (ASEAN), for example, has collaborated to standardize research and data collection methods at the regional and subregional levels, with the ASEAN Convention Against Trafficking in Persons, Especially Women and Children becoming legally enforceable in March 2017.

Specifically, the plan calls for awareness campaigns to educate all levels of society on trafficking; capacity building of law enforcement and other relevant officials needed to prevent trafficking; and enhanced cross-border cooperation and sharing of intelligence and exchange of information to disrupt trafficking operations, among other things.

“While some ASEAN member states are considered countries of destination, others are considered countries of origin and transit,” according to the ASEAN Plan of Action Against Trafficking in Persons, Especially Women and Children. “Depending on whether they are origin, transit or destination countries, the challenges, national priorities and strategies of ASEAN member states are different. Nonetheless, they share a common interest and commitment in preventing and combatting trafficking in persons.”

Called “Be My Protector,” the application allows either a victim or any individual who has identified a potential trafficking victim to upload photographs, describe the situation and define the severity. Tenaganita and Change Your World, the two NGOs behind the application, conduct an initial investigation, then forward details to police and other authorities as necessary. The NGO investigation would begin within 24 hours of receiving a complaint. The application developers expected 100,000 downloads by the end of 2018 and 1 million downloads by 2023.

Malaysian government officials, meanwhile, have increased prosecution of suspected traffickers during the past few years. In 2017, authorities prosecuted 282 human trafficking cases, compared with 131 in 2016 and 26 in 2015, according to Benar News.

In 2017, Malaysia was upgraded to Tier 2 due to the Malaysian government demonstrating increasing efforts to curb trafficking, compared with the previous year’s reporting period. In the 2018 report, however, Malaysia was slightly downgraded to a Tier 2 Watch List. Both reports urged authorities to do more to identify trafficking victims and protect them.

“It is a huge problem because we have a lot of migrant workers here, and Malaysia will be measured globally by how we treat the victims of human trafficking,” said Hannah Yeoh, former speaker of the Selangor State Legislative Assembly, Benar reported.

Government officials have used that spotlight to continue striving for better. Malaysian authorities say they expect to be in full compliance with the United States’ minimal trafficking standards by 2020.

Southeast Asian children are often stripped from their homes and placed in orphanages as part of a scheme to generate financial donations. Such scams are known as “orphanage tourism,” and countries like Australia say enough is enough.

“We have created the problem for the region, so now we have to work with other countries to fix it,” said Australian Sen. Linda Reynolds. “We need to be part of the solution, and we are not waiting to act.”

These child victims are often given up by their families and become tourist attractions for orphanages that use them in a scam to beg for money and other support. Australians have historically been among the top donors for such orphanages in the region, according to Reuters.

“Our volunteers — many young people and students — are unwittingly taking part in human trafficking … paying up to AUS $2,000 to do so,” said then Australian Foreign Minister Julie Bishop. “We don’t want to add to the misery of children in the region. We need to address this scourge.”

Cambodia has a growing number of orphanages, Reuters reported. That increase has been spurred by appeals from Australians and others who assume they’re doing a good deed, when they’re really being deceived.

About three out of four children living in an orphanage in Cambodia have at least one parent, according to United Nations data.

“The worst orphanages retain and exploit children with the aim of making money. Orphanages should be an option of last resort for children,” Bishop said, according to Reuters.

Australian citizens aren’t immune from the problem, as Home Affairs officials estimate as many as 4,000 Australians are victims of modern slavery around the world, working in mines, factories, brothels, construction sites and farms.

“Their exploitation involves serious crimes and grave human rights abuses and taints the goods and services that we use every day,” Assistant Home Affairs Minister Alex Hawke said, according to Australia’s 9 News.

The Modern Slavery Bill 2018 was introduced to the Australian Parliament on June 28, 2018. If passed, this bill would increase reporting on modern slavery practices criminalized under Commonwealth law but does not provide for financial penalties for non-reporting.

Authorities consider the Philippine city of Angeles a trafficking hot spot in Southeast Asia. Police, prosecutors, other government agencies and NGOs have joined forces to educate the population to prevent them from being trafficked and to help identify suspected victims.

“We need to be proactive and focus on prevention to break the cycle of trafficking,” said Cecilia Flores-Oebanda, founder and head of the Manila-based anti-trafficking charity Visayan Forum Foundation, according Reuters. “We see a lot of raids and rescues … but the culture has not changed, and people need to be aware of the crime.”

The Philippines is the only Indo-Pacific nation to receive the U.S. government’s Trafficking in Persons Report’s top ranking for two consecutive years for its efforts to combat human trafficking. Yet, nearly 400,000 people — or 1 in 250 of the population — are victims of modern slavery, according to the 2016 Global Slavery Index by the Walk Free Foundation.

One segment of the trafficking conversation offering help is the victims themselves.

Some survivors already working with the Salvation Army’s anti-trafficking campaign say receiving education, training and jobs can help them rebuild their lives and set an example for others.

“Survivor leaders can give hope to those starting their journeys in freedom, offering an example of what is possible in the future,” Dang, a survivor-turned-activist who was sold for sex during childhood, told Reuters.

India has provided jobs for making clothes and furniture to survivors. The United States offers catering and coding jobs. Worldwide, countries have increasingly sought ways to put slavery survivors to work as they start their new lives.

It’s the connections among victims, governments, NGOs and communities themselves that must continually be fostered to break the cycle.

“In this age of interconnected markets, mobile workforces, and digital communication, human traffickers are developing newer and more sophisticated ways to exploit their victims. Traffickers are particularly skilled at identifying and cultivating vulnerability in those they exploit, taking advantage of difficult circumstances and instability, and exploiting government policies and activities in unexpected ways,” the Trafficking in Persons Report 2018 concluded. “No matter how effective national policies are in fulfilling their intended goals, governments should continuously examine and test their policies to ensure they do not enable traffickers or otherwise contribute to human trafficking.”

Without such measures, human trafficking will continue to flourish, the report said. “Some governments’ pursuit of national security and regional stability may also indirectly enable human trafficking. At times, government support for and operational coordination with armed services and groups can unintentionally empower them to exploit people through forcible recruitment into armed groups, recruitment and use of children, or sexual exploitation,” the U.S. Department of State report said.

“Governments that support militaries and armed groups should ensure they understand the full scope of such organizations’ activities and how they put government resources to action. Governments should encourage the public to report abuses, establish transparent processes by which to review accusations, and take appropriate action including to hold perpetrators accountable and ultimately to end support and coordination with such groups.”