Fluctuations in geopolitical ties and strategic partnerships are nothing new to the Indo-Pacific, and in 2018, Russia maneuvered to exploit such wavering alliances to wield regional influence.

While some countries have welcomed Russia’s appetite for more sway, others warn their added competition could erode military and economic stability.

The “free and open Indo-Pacific” (FOIP) strategy initiatied by the United States could complicate Russia’s attempt to shape the region by ensuring international norms and the rules-based order are followed. 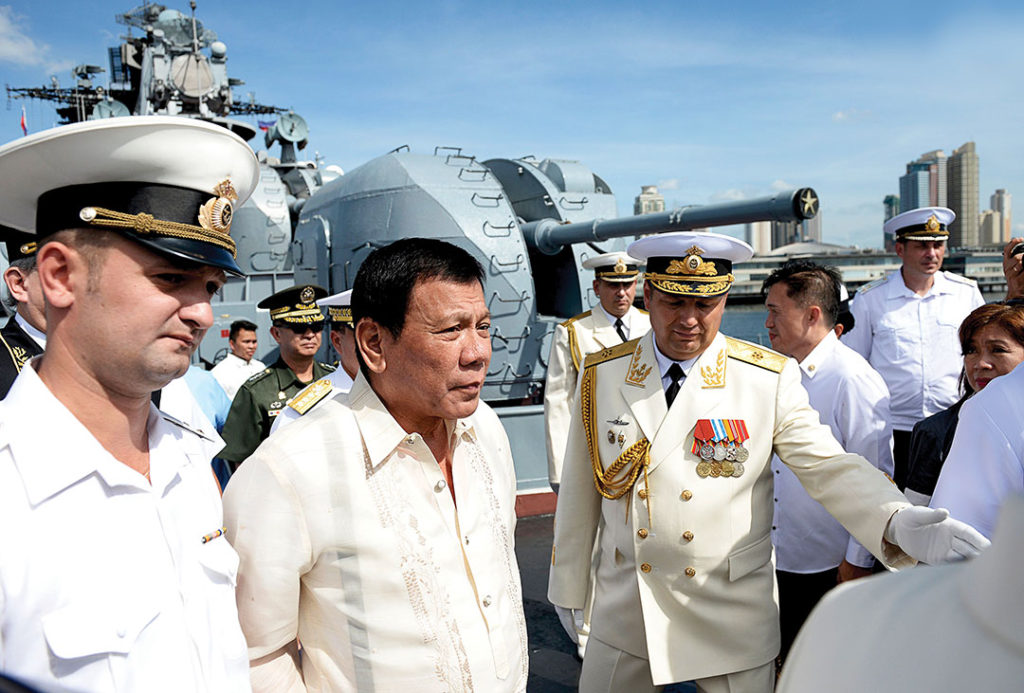 Strong alliances and partnerships create the foundation of the U.S. security strategy. Alliances underpin the regional stability that has allowed the Indo-Pacific region to flourish economically and politically. The United States has a vested interest in fostering relationships that maintain peace and propel growth. For its part, the U.S. continues to form networks of partnerships, including trilateral and quadrilateral mechanisms on mutual interests, to advance shared economic, security and governance goals in the region. These are the kinds of values, however, that often appear incompatible with the modus operandi of Moscow and Beijing.

“China and Russia challenge American power, influence, and interests, attempting to erode American security and prosperity,” according to the U.S. National Security Strategy. “They are determined to make economies less free and less fair, to grow their militaries and to control information and data to repress their societies and expand their influence.”

Philippine President Rodrigo Duterte continues to expand his country’s ties to other countries. While doing so, Duterte courted Russia, inviting it to become the Philippines’ new ally and protector. Russia’s ambassador to the Philippines, Igor Anatolyevish Chovaev, said in January 2018 that Moscow stood ready to supply the Philippines with sophisticated weapons as they worked toward becoming close friends.

“We welcome our Russian friends. Any time you want to dock here for anything, for play, [to] replenish supplies or maybe [as] our ally to protect us,” Duterte told Rear Adm. Eduard Mikhailov, head of a Russian Navy Pacific Fleet flotilla, in January 2018, according to the Philippines Lifestyle News website.

In addition to the Philippines, Russia is also selling arms to Southeast Asian countries Indonesia and Burma, the Dhaka Tribune newspaper reported in April 2018.

Vladimir Putin unsurprisingly won re-election in March 2018, giving him a fourth term as Russian president and keeping him in office until 2024. Confirmation of his continued leadership could be a contributing factor to Russia’s increasingly assertive reach into the Indo-Pacific.

“President Vladimir Putin’s actions in the recent past are clearly indicating that he not only has a growing appetite for power beyond Russia’s borders, but also feels that Russia can fill the void in parts of the world where the U.S. once wielded unipolar influence,” according to the Dhaka Tribune. 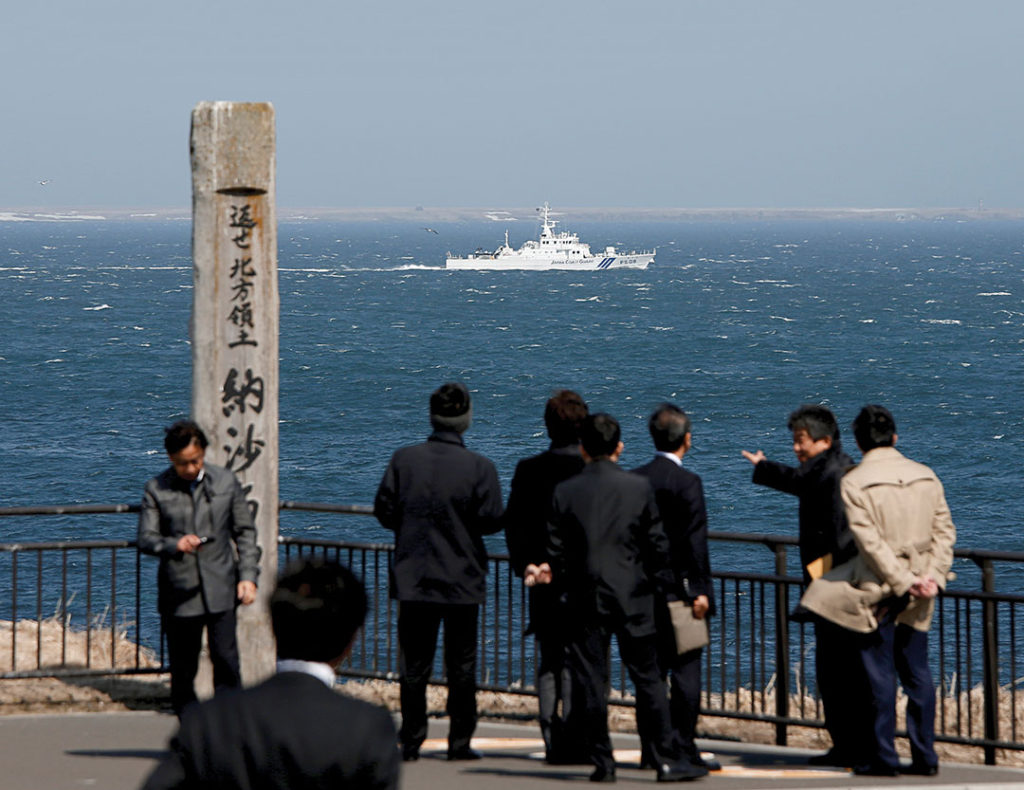 Japan Coast Guard vessel PS08 Kariba sails off Cape Nosappu, Hokkaido Island — Japan’s easternmost point. In the background are islands whose ownership is in dispute; Japan claims some as its Northern Territories, and Russia claims some as part of the Kuril Islands. REUTERS

Another Southeast Asian nation that wants more Russian participation is Vietnam — which also continues to nourish its relationships with the U.S. and the PRC.

“The party, state, national assembly, government and people of Vietnam have greatly treasured the traditional friendship and efficient cooperation with Russia and have always attached importance to developing the comprehensive strategic partnership with the country — regarding it as one of top priorities in their foreign policy,” General Secretary of the Communist Party of Vietnam Nguyen Phu Trong said in January 2018, according to Viet Nam News.

The defense relationship between Russia and Vietnam dates to the beginning of the Cold War, predating the Vietnam War. A recently updated defense agreement between the pair outlines activities through 2020 that include cooperative endeavors, meetings and drills (though few public details have been released). The Russian Navy Command has suggested re-launching a marine logistics base for Russian warships, saying that the main point of the base would be to provide support for Russian vessels combating piracy in the Indian and Pacific oceans.

“Russia and Vietnam share views on the problems of the world order and call for respecting the international law, the central role of the United Nations, a collective approach to solving any issues and solely peaceful methods of settling any disputes,” Russian Foreign Minister Sergey Lavrov said in March 2018 following talks with his Vietnamese counterpart, Pham Binh Minh, according to the Russian News Agency.

Russia and Vietnam seek to set up “such an architecture of cooperation which would ensure sustainable development and meet interests of security” of all countries of the Indo-Pacific, Lavrov said. “Military and military-technical cooperation between Russia and Vietnam fully meets these criteria.”

Ongoing disputes, however, and Russia’s own aggressive activities may stymie Moscow’s ambitions to assert influence in the broader region.

Russia and Japan, for example, continue to clash over a volcanic archipelago stretching 1,300 kilometers from Hokkaido, Japan, to Kamchatka, Russia. Both nations claim land masses within the Kuril Islands, where Russia wants control of an airstrip on the island of Iturup, known as Etorofu by Japan.

More than 2,500 Russian troops asserted dominance during drills in the Kuril Islands in April 2018, prompting Japan to lodge an official diplomatic complaint.

Soviet troops seized the island region in 1945 after Japan agreed to terms of the Potsdam Declaration, which dictated Japan’s World War II surrender. The territorial dispute has prevented Japan and Russia from concluding a post-World War II peace treaty.

Tanks, artillery units and ships from Russia’s Pacific Fleet participated in the exercise, which included live-fire training, according to Japanese broadcaster NHK World.

Russia announced in January 2018 that it intends to base military aircraft in the Kuril Islands. That announcement came amid diplomatic talks with Japan to ratify the official peace treaty ending World War II. Japanese Prime Minister Shinzo Abe accused Russia of negotiating in bad faith and threatened to withdraw from the talks.

“Building a relationship of mutual trust and understanding between the peoples of the two nations is an important step toward concluding a peace treaty,” Japanese Foreign Minister Taro Kono said in March 2018 following a meeting with his Russian counterpart, according to The Japan Times newspaper.

Deeper in the Pacific, Russia has ruffled Australia’s feathers by sending strategic bombers to conduct exercises in neutral waters off Indonesia.

“It’s a reminder that Russia is here and wants to be a player in Pacific security and will use military force to demonstrate that,” said Peter Jennings of the Australian Strategic Policy Institute, according to The Guardian newspaper.

The Australian Department of Defence said “there was a brief period of increased readiness” in December 2017 when the Russian bombers conducted patrols after taking off from Indonesia’s Biak airfield, The Guardian reported.

Jennings said the Australian Defence Force may have had concerns about Russia conducting an intelligence-gathering operation “because they wouldn’t come this far south without wanting to look at the one significant Allied presence in this part of the world,” he said, according to The Guardian.

The newspaper also listed a series of demonstrations by Russia to promote influence in the region. In 2016, Russia sent a secret shipment of 20 containers of weapons and military hardware to Fiji, followed by Russian personnel to provide weapons training; in 2014, Russia incited uneasiness by moving its naval vessels north of Australia days before the G20 Summit in Brisbane as tensions between Moscow and Canberra ran high, according to The Guardian.

Tensions between Russia and Australia prompted the Australian government in March 2018 to warn citizens of anti-Western sentiment and harassment they could face should they travel to Russia.

“While the Australian government is not aware of any increased difficulties for Australians traveling in Russia at this time, you should follow the security and political situation closely and keep up to date with this travel advice,” the Australia Department of Foreign Affairs and Trade said in a statement. “Remain vigilant, avoid any protests or demonstrations and avoid commenting publicly on political developments.”

The following month in April, as many as 400 Australian businesses became victims of a cyber attack. Australia, Britain and the United States accused Russian government-backed hackers of infecting computer routers around the world in a cyber-espionage campaign targeting government agencies, businesses and critical infrastructure operators.

“We know that they were behind these attacks and that’s a very important escalation,” Australian Cyber Security Minister Angus Taylor told the Australian Broadcasting Corp. “The most important thing at this point is to attribute it. To say we know where this came from, we are working with our partners … and it’s unacceptable behavior.”