Story and Photos by The Associated Press

Indonesia’s parliament unanimously approved a tougher anti-terrorism law in late May 2018, lengthening detention periods and involving the military in counterterrorism operations. Legislators were spurred to action by bombings that involved children as perpetrators.

Rights groups had criticized some revisions as overly broad or vague and warned against rushing them into law. The scope for the military to become involved in counterterrorism operations is contentious because it backtracks on two decades of keeping Soldiers out of areas under civilian authority.

President Joko Widodo had threatened to impose the changes by special decree if parliament didn’t rapidly approve them. Changes were first proposed after a January 2016 suicide bombing and gun attack in Jakarta but languished in the legislature.

By the end of May 2018, police had killed 14 suspected Islamic militants and arrested 60 since the suicide bombings that took place earlier in the month in Indonesia’s second-largest city, Surabaya. Radicalized families, accompanied by children as young as 7, carried out those attacks. 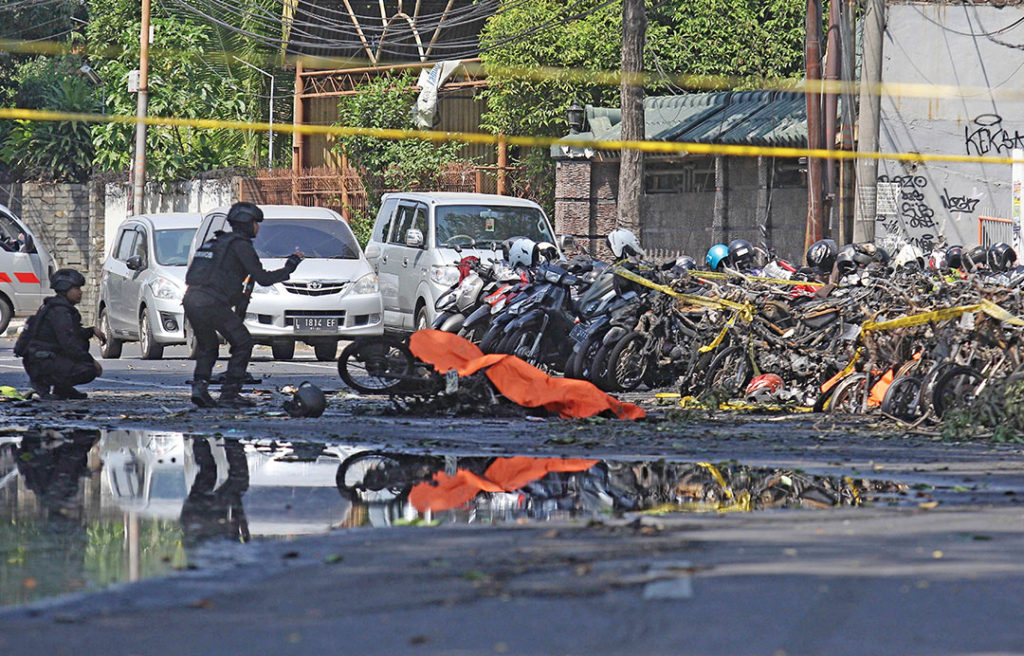 A police bomb squad inspects wreckage of motorcycles at the site of an explosion outside a church in Surabaya.

The suicide bombings, which horrified Muslim-majority Indonesia, killed 26 people, including 13 members of the families that conducted them. The key perpetrator was the leader of the Surabaya cell of an Indonesian militant network that professes loyalty to the Islamic State of Iraq and Syria (ISIS).

The new law triples the maximum detention period without charge for suspected militants to 21 days and roughly doubles the entire permissible detention period from arrest to trial to more than two years.

Several articles address gaps in the original law from 2003, giving greater legal basis to prosecute individuals such as radical clerics who inspire attacks or Indonesians who traveled abroad to join ISIS.

The definition of terrorist acts and threats was expanded to include motives of ideology, politics and security disruption. Some lawmakers said that would prevent the law from being abused.

Military involvement in counterterrorism operations will be defined later by presidential regulation.

Muhammad Syafi’i, chairman of the parliamentary committee that reviewed the new law, said inclusion of the military aims to improve police capabilities in cracking down on extremism and radical networks in Indonesia.

Indonesia became a democracy after the ouster of dictator Suharto in 1998 and the role of the military, which had enjoyed sweeping powers, was reduced to national defense.

Indonesia’s counterterrorism operations are now led by an elite police squad, Densus 88, set up following the 2002 Bali nightclub bombings that killed 202 people, mostly foreigners. In the past two years, the squad says it has thwarted as many as 23 terror plots and arrested more than 360 suspected militants.