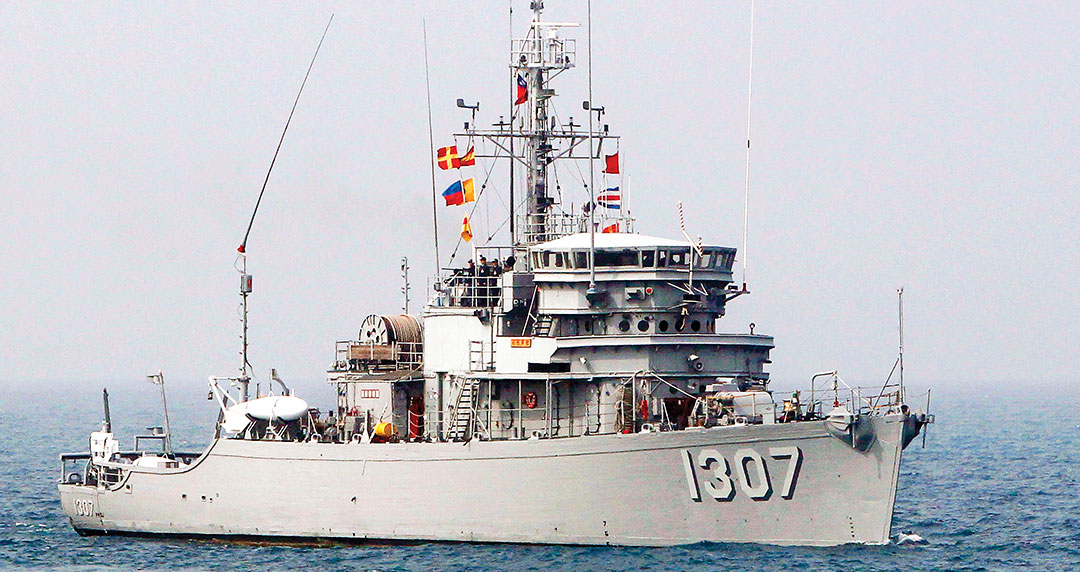 Powered by the world’s largest shipbuilding industry, as well as the world’s second-largest economy and defense budget under Xi Jinping’s ambitious leadership, China is becoming a major sea power in its own right and in its own way.

Not seeking war but determined to change the status quo coercively, Beijing employs its enormous second and third sea forces in so-called maritime gray zone operations to further its disputed sovereignty claims in the near seas (Yellow, East and South China seas). Typically, its first sea force provides coordination and deterrence from over the horizon.

China’s first sea force, the PLAN, already has the most ships of any navy. “The PLAN is the largest navy in Asia, with more than 300 surface ships, submarines, amphibious ships and patrol craft,” according to the Pentagon’s 2017 China Military Power Report. By 2020, the PLAN will have
313-342 warships, the U.S. Office of Naval Intelligence forecasts. Meanwhile, as of April 13, 2018, the U.S. Navy had 285 “deployable battle force ships,” according to its official website. 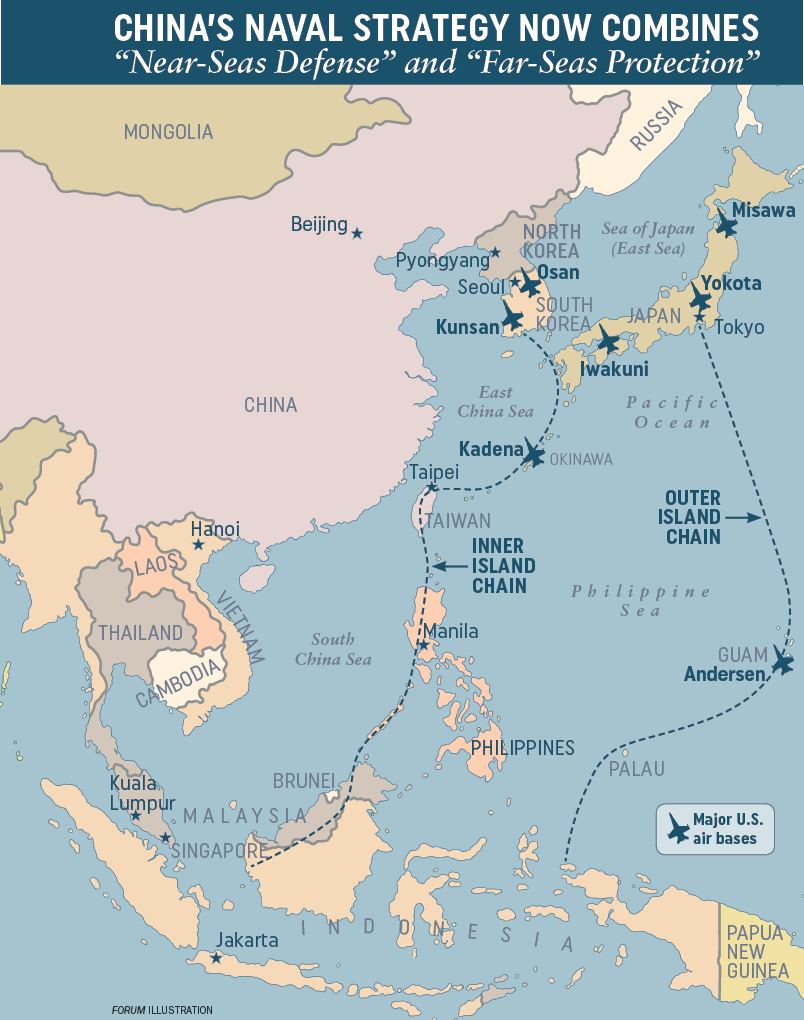 From 2005 to 2020, this represents a 15-year net increase of 400 total coast guard ships. That includes 202 additional ships capable of operating offshore, representing 350 percent growth in the latter category.

In terms of qualitative improvement, China has now replaced its older, less-capable large patrol ships. It is applying lessons learned from scrutinizing the “gold standard” U.S. and Japanese coast guards, as well as the CCG’s increasing experience operating farther offshore for longer periods. The resulting new ship features include helicopters, interceptor boats, deck guns, high-capacity water cannons and improved seakeeping. With a length of 165 meters, a beam of 20-plus meters, and at 10,000-plus tons full load, China’s two Zhaotou-class cutters are the world’s largest coast guard vessels and displace more than most modern naval destroyers. Most newly built CCG ships have helicopter decks, some with hangars. Many new CCG ships have quick-launch boat ramps on the fantail, allowing for rapid deployment of interceptor boats. These include approximately 10-meters-long fast interceptor boats with twin outboard engines enabling high speeds for visit, board, search and seizure law enforcement against fishing vessels or other ships. Many new ships have 30 mm guns mounted, with a few of the larger ships carrying 76 mm main guns. Most recently constructed CCG ships now have high-output water cannons mounted high on their superstructure.

China’s third sea force, the PAFMM, is a state-organized, developed and controlled force operating under a direct military chain of command to conduct Chinese national activities. It is locally supported, but it answers to the top of China’s centralized bureaucracy: Commander in Chief Xi himself. The part-time elite units engaged in many of these incidents incorporate marine industry workers (for example, fishermen) directly into China’s armed forces. While retaining day jobs, they are organized and trained in the PAFMM, often by China’s navy, and activated on demand.

Since 2015, starting in Sansha City in the Paracels, China has been developing a full-time militia force: more professional, militarized, well-paid units including military recruits, crewing 84 large vessels built with water cannons and external rails for spraying and ramming.

FAR SEAS VERSUS NEAR SEAS OPERATIONS

China’s second and third sea forces are helping to operationalize a naval strategy that has evolved from “near-coast defense” to a combination of “near-seas defense” and “far-seas protection.” Beijing’s maritime force posture is shifting from a coordinated three-sea-force focus on regional seas to supplementing that ongoing effort with a further division of labor in which PAFMM and CCG roles and missions have expanded to backfill behind the PLAN as it significantly increases its overseas missions and presence.

Adm. Harry B. Harris, Jr., then-Commander of the U.S. Indo-Pacific Command, testified in February 2018 before the U.S. House Armed Services Committee: “Across the South China Sea, China’s air force, navy, coast guard and maritime militia all maintain a robust presence. Routine patrols and exercises ensure Chinese forces are in and around all the features, not just the ones they occupy. China routinely challenges the presence of non-Chinese forces, including other claimant nations and especially the U.S., often overstating its authority and insisting foreign forces either stay away or obtain Chinese permission to operate.”

In the near seas, China employs the CCG and PAFMM in gray zone operations against vessels from its maritime neighbors, as well as the U.S. at a level designed to frustrate effective response by the other parties involved.

China has used these forces to advance its disputed sovereignty claims in international sea incidents throughout the South China Sea, as well as in the East China Sea. This undermines vital U.S. interests in maintaining the regional status quo, including the rules and norms on which peace and prosperity depend.

Today, Chinese sea forces are enveloping the Philippines-claimed Sandy Cay shoal (near Thitu Island), around which China has sustained a presence of at least two PAFMM vessels since August 2017. The CCG regularly challenges Japanese administration of the Senkaku Islands. Chinese maritime law enforcement and PAFMM vessels and personnel cooperated in the 2014 controversial repulsion of Vietnamese vessels from disputed waters surrounding China National Offshore Oil Corp.’s Hai Yang Shi You 981 oil rig, 2012 seizure of Scarborough Shoal from the Philippines, and 2009 harassment of USNS Impeccable.

During the past two decades, PAFMM units have participated in China’s 2015 maneuvers around USS Lassen, 2014 harassment of USNS Howard O. Lorenzen, 2014 blockade of the Second Thomas Shoal, harassment of multiple Vietnamese government and survey vessels; and occupation and development of Mischief Reef, resulting in a 1995 incident with the Philippines.

As the U.S. National Security Strategy 2017 emphasizes, China is engaged in continuous competition with America — which it views as neither fully at peace nor at war. To continue to safeguard U.S. interests and maintain a free and open Indo-Pacific, the U.S. Navy must continue to grow numerically, maintain a robust presence, and — together with its domestic and foreign allies and partners — deter even the most determined aggression with sufficient numbers of long-range strike systems.

Numbers matter significantly when it comes to maintaining presence and influence in vital seas: Even the most advanced ship simply cannot be in more than one place simultaneously. Case in point: the growing U.S.-China strategic competition where Washington plays a distant away game. U.S. Coast Guard cutters are focused near American waters, far from any international disputes, while the U.S. Navy is dispersed globally, with many ships separated from maritime East Asia by responsibilities, geography and time. By contrast, all three major Chinese sea forces remain focused first and foremost on the contested near seas and their immediate approaches, close to China’s homeland, land-based air and missile coverage, and supply lines.

Meanwhile, the U.S. and its allies and partners must increase their efforts to counter China’s erosive gray zone activities, currently the focus of its efforts to impose its national laws and disputed sovereignty claims on features and maritime spaces to which its neighbors and the international community have legitimate rights.

To help complicate and counteract the Chinese maritime coercion that former Adm. Harris rightly emphasized, the U.S. should further demonstrate proactive leadership in the Indo-Pacific by sharing more information on all three PRC sea forces, emphasizing the cooperative nature of collective security, and encouraging allies and partners to invest in capabilities that complement those of the U.S. A particularly promising area for leveraging like-minded stakeholders is to further pursue collaborative approaches to maritime domain awareness that help them monitor proximate waters and airspace and share resulting information. Assisting less capable partners with hardware and training will help them not only to better help themselves and enhance status quo-supporting presence but also to populate the common operational picture.

Additionally, the U.S. can leverage Chinese weaknesses and constraints more effectively to limit negative behavior. At the strategic level, the U.S. can curtail the ability of China’s gray zone forces to operate without scrutiny and with plausible deniability, however implausible, by publicly revealing their true nature and demonstrating resolve to impose consequences for unlawful actions.

To regain the operational initiative, the U.S. must better deter and punish any Chinese use of the PAFMM in ways that are inimical to U.S. interests to break China’s asymmetric advantage through calibrated escalation as needed.