Indonesia will double the size of its counterterrorism force ahead of major international events taking place in the country in 2018, National Police Chief Gen. Tito Karnavian said in late December 2017. A two-star police general will head the force instead of a one-star general, Tito said.

“I have also asked for the force numbers to be doubled. We’re adding about 600 personnel, so that the total will become 1,300,” he said.

The former head of the elite police unit said the change was due to an assessment of the 2018 threat level when Indonesia hosts two major international events.

The events are the Asian Games, which will take place in Jakarta, the Sumatran city of Palembang and various parts of West Java, with 1,500 people from 45 nations participating; and annual meetings of the International Monetary Fund (IMF) and World Bank (WB) in Bali, with 189 nations taking part.

The participation of North Korea and Burma in the Asian Games in August and September 2018 and of Israel and the United States in the IMF and WB meetings in October make both events potential targets for radical groups and terrorists, Tito said.

Densus 88, part of Indonesia’s police force, in 2017 apprehended 172 suspected terrorists, of whom 16 were shot dead during arrest attempts, officials said.

“The number of arrests is more due to the proactive steps undertaken by the police, more specifically Densus 88, who are working harder to detect, monitor and take action against terror networks,” Tito said. 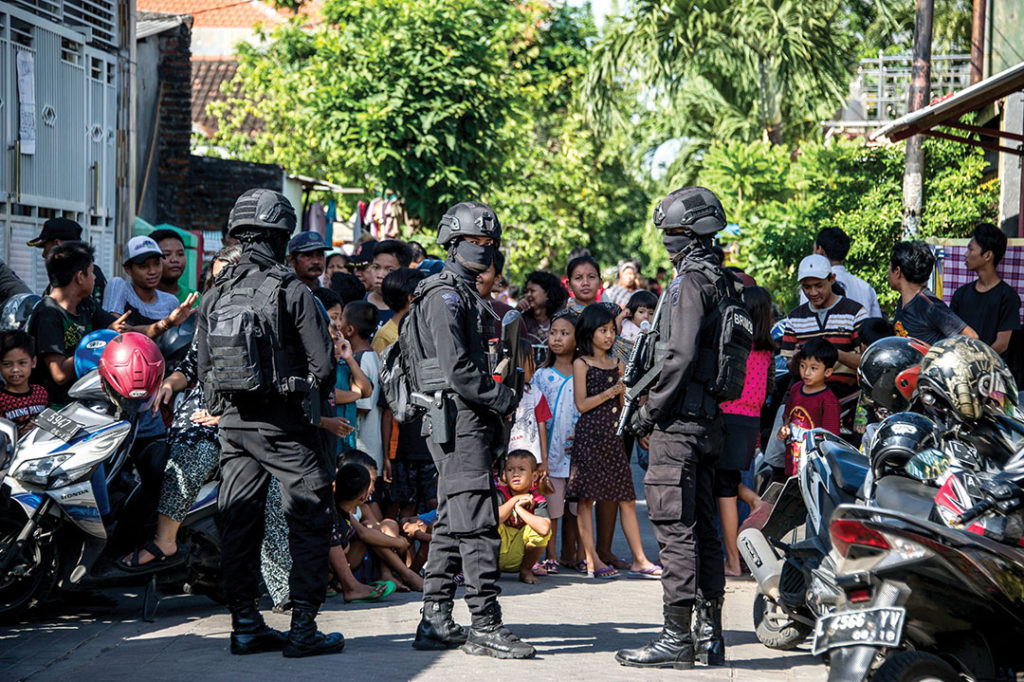 Indonesian counterterrorism police cordon off a road to search a house in Surabaya, East Java province, on June 19, 2017, after the arrest of a man suspected of links with the Islamic State of Iraq and Syria. [GETTY IMAGES]

He said the number of police killed in terror acts had increased during the past three years. Four police were killed and 14 wounded on the job in 2017, Tito said. In 2016, the elite force suffered one fatality, and 11 were wounded. One officer was killed and two injured in 2015.

“I have instructed that there be more undercover work, early prevention and action before incidents occur. For this, we need stronger detection capacity,” he said.

The higher rank of the Densus 88 commander suggests an expansion of tasks and a larger budget for the force, according to counterterrorism expert Rakyan Adibrata.

“But keep in mind, training a 100 percent professional and prepared counterterrorism officer is very time consuming, whereas training a terrorist is much faster,” he said. “Densus will be racing against time.”

“From the point of view of resources, ISIS [Islamic State of Iraq and Syria] is not like Jemaah Islamiyah, which aimed for a lot of casualties,” Rakyan said, comparing ISIS with the al-Qaida affiliate that killed 202 people in the 2002 nightclub bombings in Bali.

“For them, it’s enough to mount attacks with a simple kitchen knife,” he said of ISIS.

Rakyan agreed with the police chief’s analysis that the international events in Indonesia in 2018 could be targeted by terrorists.

“There are high expectations from perpetrators who want to use terrorism as a tool to convey political messages,” he said.

According to statistics from Indonesia’s Foreign Ministry, 227 Indonesians were arrested abroad in 2017, including in Turkey, Malaysia, Syria and South Korea. The highest number of arrests took place in Turkey with 195 people, followed by Syria with 28.

The ministry added that 213 Indonesians, including 79 women and 78 children, were deported from Turkey between January 1, 2017, and October 20, 2017. That number was three times greater than the 60 deportees from Turkey in 2016.

Foreign Ministry official Lalu Muhammad Iqbal said most of the Indonesians were deported due to immigration violations, such as using an incorrect visa, overstaying a visa or being unable to produce a passport.

“Nevertheless, Turkish authorities indicated their suspicion that these individuals were in Turkey in order to cross into Syria and join ISIS or other groups of that nature, such as Jabhat al-Nusrah, in Syria,” he said.