When it comes to rankings, moving up on a list of places most targeted by terrorists represents a distinction no country wants to claim.

Yet, India found itself in that predicament when the U.S. State Department released a report in July 2017 that showed India had ascended to the No. 3 spot — displacing Pakistan and landing behind Iraq and Afghanistan. Of the 11,072 terror attacks counted worldwide in 2016, 927 occurred in India, according to the report. That represented a 16 percent increase from
2015 figures.

The government of India, however, has not  remained complacent about this trend.

“India is steadfastly committed to efforts to combat global terrorism and has consistently advocated in various international [forums] for a policy of zero tolerance on terrorism,” Minister of State for External Affairs Dr. V.K. Singh, a retired four-star general, who served as the 26th chief of army staff, said in July 2017.

Though fatalities were on the rise due to increased terrorist activity, India worked tirelessly to better equip its government, military and other authorities with laws, tools and trainings to reverse the trend.

The U.S. State Department noted that in 2016, India sought to improve the exchange of terrorism screening information and law enforcement cooperation in individual cases; cooperated with Bangladesh on procedures to improve the extradition of suspects involved in terrorism and organized crime; and banned radical cleric Zarik Naik’s Islamic Research Foundation as “an unlawful organization.”

Also in 2016, Prime Minister Narendra Modi demonetized the 500- and 1,000-rupee notes, delivering on his pre-election promise to tackle corruption and tax evasion. This action has the additional effect of driving black money out of the shadows and impacting terrorist activity and funding. 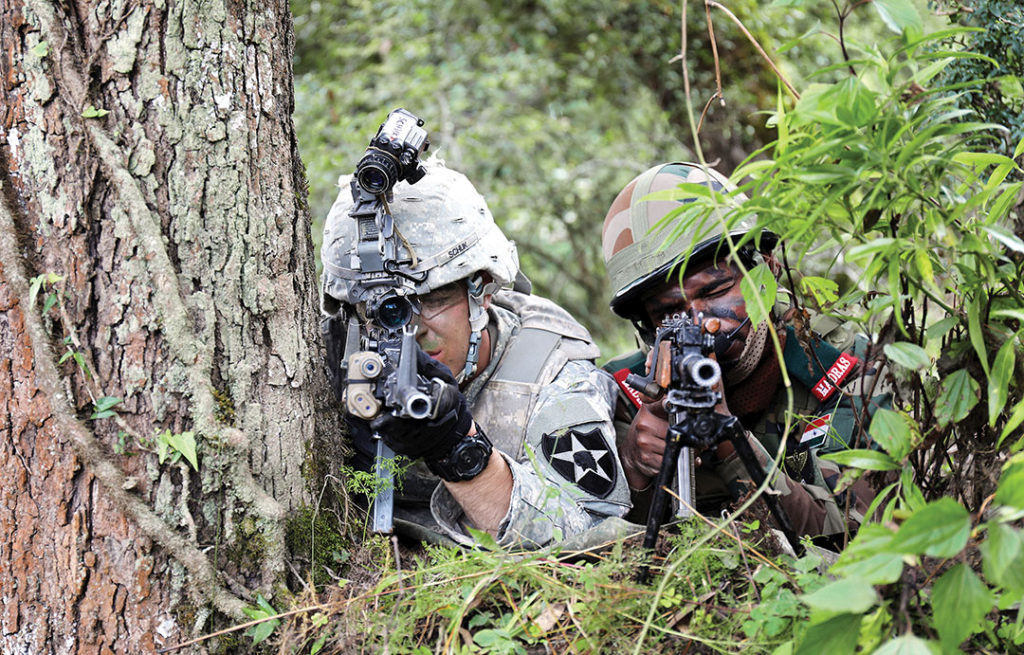 Indian government officials continue to raise concerns over the use of social media and the internet to recruit, radicalize and provoke interreligious tensions, the report said. In particular, officials have expressed concern about the Islamic State of Iraq and Syria’s (ISIS’) ability to recruit online, following incidents in which Indians were attracted to join or support the group. In January 2018, one Indian military official called for more internet restrictions to fight ISIS and other terrorist groups in the digital domain.

“Putting some checks and curbs on internet and social media that terrorist organizations always resort to” is necessary for safety and security, Indian Army Chief Gen. Bipin Rawat said, India.com reported. “In a democratic country, people won’t like it, but we have to make a call on whether we want safe and secure environment or [are] willing to accept curbs temporarily, so that terrorism can be dealt with.”

Terror groups have a militant and political front, Rawat said. Their soft power tactics must be met with countermessaging at every step and dissemination of their messages prohibited and retracted whenever possible.

To that end, social media giants Facebook, YouTube, Twitter and Microsoft announced in June 2017 the formation of a global working group to combine their efforts to remove terrorist content from their platforms. Thus, the Global Internet Forum to Counter Terrorism (GIFCT) was established. Additional companies, such as Instagram, LinkedIn and Snapchat now participate.

“GIFCT’s knowledge-sharing work has grown quickly in large measure because companies recognize that in countering terrorism online we face many of the same challenges,” the consortium said in a December 2017 update. “Although our companies have been sharing best practices around counterterrorism for several years, in recent months GIFCT has provided a more formal structure to accelerate and strengthen this work.”

It continued, “We recognize that our work is far from done, but we are confident that we are heading in the right direction. We will continue to provide updates as we forge new partnerships and develop new technology in the face of this global challenge.”

Rawat noted the importance of such collaboration as today’s battlefield extends beyond a physical delineation.

“We should start preparing for the next kinds of warfare, which are cyber and information warfare,” Rawat said in January 2018, according to Pakistan’s The News International newspaper.

Home Affairs Minister Rajnath Singh echoed the need to adapt new tactics for combating evolving terror threats. In January 2018, he called for the creation of a special anti-terror cell to focus on lone-wolf actors and “do-it-yourself” terrorists.

The Home Ministry’s researchers have also begun a project to document reasons behind the radicalization of youth and ways to counter religious extremism in India, the Indian news site Firstpost reported in January 2018. Authorities described the program — called “Rad and Derad” — a “rare endeavor” to gain insight into radicalization and extremism.

Indian officials wish to replicate Singapore’s multilayered and structured mechanism to counter the threat of radicalized youth and ISIS.

“For Indian conditions, among various counterradicalization programs being undertaken by different countries, the Singapore model, a combination of hard security measures and stringent laws along with community involvement, is best suited, and thus we are evolving a system to suit Indian situations,” an unnamed senior Ministry of Home Affairs official said in January 2018, according to multiple news reports. 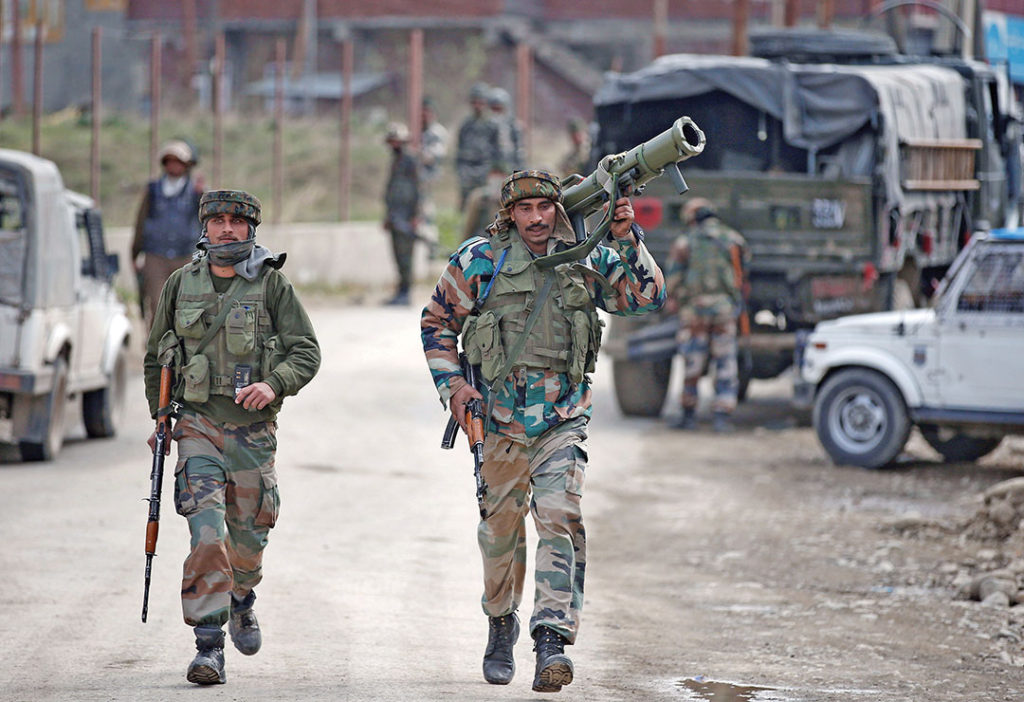 Indian Army Soldiers arrive at the site of a gunbattle with suspected militants in Chadoora, on the outskirts of Srinagar, India. Reuters

“All the units of the government apparatus and the entire Muslim community spectrum will be associated actively with the community for counseling the affected youths,” an unnamed intelligence source in the ministry said, according to UNI. “With a latest monitoring mechanism to keep an eye on the internet users who are active on different jihadi websites, a well-coordinated nationwide, round-the-clock, community-based and multilingual platform for disseminating suitably constructed counternarratives is being also worked out.”

The Singapore model also defines the role of the family, teachers and neighbors in the community of a person undergoing deradicalization.

Clerics will play a key role in the India model. The government seeks to recruit religious leaders to offer credible counternarratives and alternatives to joining a terrorist organization.

The Indian Army has adopted new courses for incoming recruits, providing additional counterterrorism training and lessons on identifying the threat of cyber crimes.

“The training module for the recruits has been thoughtfully evolved to meet the challenges of subconventional warfare, which is basically low-intensity conflict operations, comprising anti-terrorist, anti-insurgency operations and if necessary anti-naxalite operations,” Brig. Govind Kalvad said in December 2017, according to The Indian Express newspaper. (A naxalite is a member of the Communist Party of India, or a Maoist.) He said the Army has not diverted from its basic tenets of military training, but merely modernized them over time.

“After the basics are covered, a trained Soldier undergoes extensive training in facing subconventional situations,” Kalvad said, according to The Indian Express. “So, after the conventional training gets over, a Soldier goes on leave and immediately after he comes back, he is attached to a camp for training on situations of subconventional warfare. So, when he leaves, he is fully prepared to face any situations in Jammu and Kashmir, Northeast or in fighting Naxalites if told to.”

Part of Indian Army training now entails 22 obstacles in various terrains, including jungles, according to The Times of India. Troops operate in groups of 30 to 50 while placed in “extremely tense situations,” Kalvad said.

The Army has also added more technology to its training, using an electronic device to check the accuracy of a Soldier’s firing instead of checking it physically.

“The future challenges continue to demand greater commitment from the Indian Army,” Rawat said in January 2018, according to Indo-Asian News Service.

The United States considers India a “leading power” in the Indo-Pacific, as the latest U.S. National Security Strategy places India in a more prominent role as a “major defense partner.”

“A geopolitical competition between free and repressive visions of world order is taking place in the Indo-Pacific region. The region, which stretches from the west coast of India to the western shores of the United States, represents the most populous and economically dynamic part of the world,” the U.S. National Security Strategy states.

Members of the Association of Southeast Asian Nations (ASEAN) look to India as well to increase its role as a stabilizing security partner in the Indo-Pacific. India has already demonstrated its desire to take on that role.

Strengthening counterterrorism and security ties proved to be an important topic during the India-ASEAN Summit in January 2018.

“In all our interactions … a repeated refrain that we picked up was a desire on the part of all the ASEAN countries for a greater presence of India, greater cooperation [with] India, and a greater integration, economically, politically and in terms of people-to-people contacts,” Secretary (East) Preeti Saran of the Ministry of External Affairs said in January 2018, according to Firstpost.

“India is at the global center stage,” said Chandrajit Banerjee, director general, Confederation of Indian Industry, a not-for-profit business association. “Expectations are huge. The world is appreciative of its efforts and wants to engage.”

Share
Previous From computer screen to battlefield
NextFighting for Home