‘Wake-Up Call’ in the Pacific

The Armed Forces of the Philippines (AFP) had identified signs of an evolving terror threat in the southern Philippines as early as June 2016. They fully uncovered the threat a year later in Marawi City after engaging in an intense five-month fight to regain control that ended with a government victory in October 2017.

The evidence of organized terror groups — caches of weapons, the presence of foreign fighters and the macabre sight of beheaded civilians — revealed a danger many Indo-Pacific leaders have long dreaded. Fighters loyal to the Islamic State of Iraq and Syria (ISIS) may try to establish an Islamic state — or at least build robust affiliates — in Southeast Asia as they lose ground in the Middle East.

“Marawi is a wake-up call for every nation in the Indo-Pacific,” U.S. Navy Adm. Harry B. Harris, Jr., then commander of U.S. Pacific Command (USPACOM), said at an Australian Strategic Policy Institute event in June 2017. “These terrorists are using combat tactics that we’ve seen in the Middle East to kill in the city of Marawi, in Mindanao, the first time ISIS-inspired forces have banded together to fight on this kind of scale.” 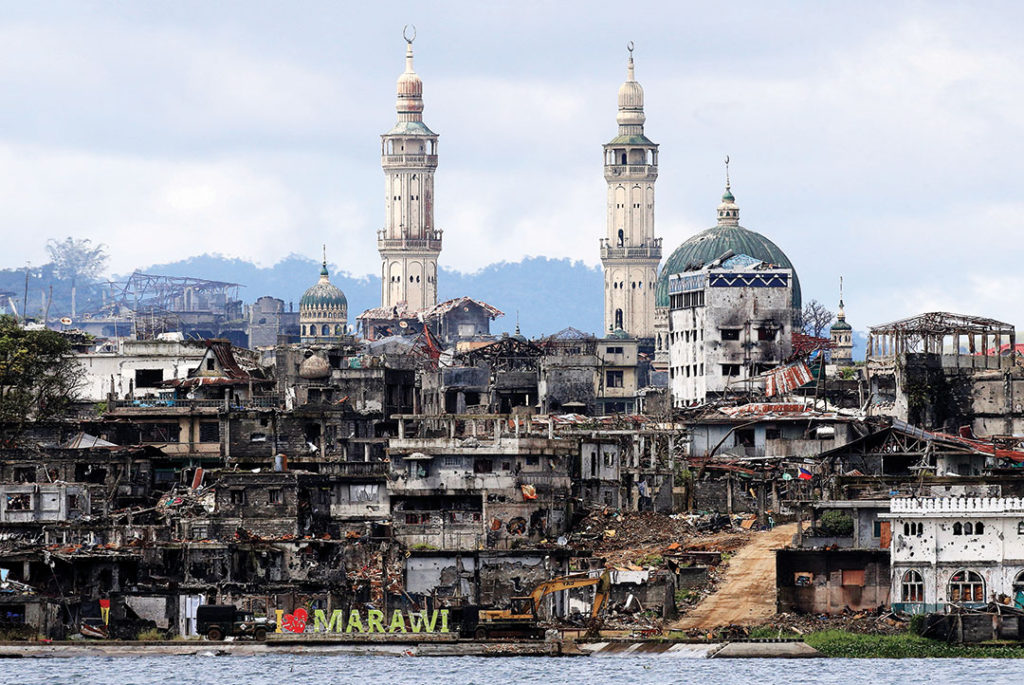 A sign reading “I love Marawi” stands in front of damaged houses, buildings and a mosque inside war-torn Marawi City. REUTERS

The fighting erupted in the Philippines in May 2017 when government forces tried to capture Isnilon Hapilon, leader of the Abu Sayyaf Group and ISIS’ designated emir in the Philippines. Hapilon’s fighters fired on Philippine police and Soldiers and received reinforcements from another organization loyal to ISIS — the Maute Group. In addition to killing civilians, Maute militants captured several buildings, including Marawi City Hall and Mindanao State University.

The AFP’s successful battle to retake the city was eye-opening for many reasons, including:

Efforts to organize ISIS-inspired fighters in Southeast Asia can be traced to operatives in Syria, concluded a report from the Combating Terrorism Center (CTC), a research and education institution at the U.S. Military Academy at West Point. The study, “Beyond the Caliphate: Islamic State Activity Outside the Group’s Defined Wilayat,” analyzed terror plots and attacks in Southeast Asia from June 2014 through April 2017 and found that 60 percent of the combined 20 attacks and 35 plots were linked to Islamic State operatives. “For these linked attacks and plots, evidence indicates that Islamic State operatives in Syria directed, funded or were in contact with local cells and individuals in the region who were sympathetic to the Islamic State,” the study, authored by CTC research associate Marielle Ness, reported.

About half of the region’s terror attacks took place in the Philippines, but extremists in neighboring Southeast Asian countries were also plotting attacks. Terrorists hatched many plots in Malaysia (43 percent) and Indonesia (37 percent), while conceiving only 14 percent in the Philippines.

Many factors combine to make the Philippines a destination for violent extremists, Don Rassler, the CTC’s director of strategic initiatives, told FORUM.

“Since at least June 2016, the Islamic State has been encouraging people to travel to the Philippines if they cannot make it to Syria or conduct attacks in their home countries,” Rassler said. “More recent material released by the group has continued to push the Philippines as a preferred destination for recruits and inspired individuals to travel to and become operationally active.”

Rassler also noted the presence of local militant groups such as Abu Sayyaf and Maute, which have proven themselves operationally capable and resilient, helps explain why more attacks are occurring in the Philippines. 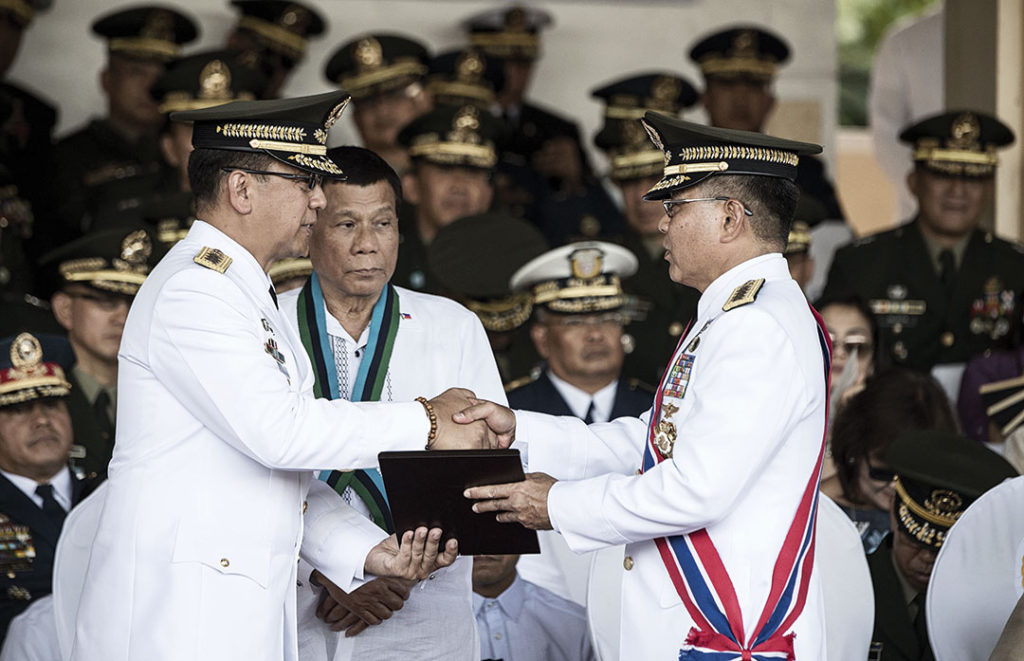 As for attempting to establish an Islamic state in the region, the study concludes that ISIS is trying to grow its forces in Southeast Asia. The report does not forecast, however, what form its presence will take. “The Islamic State appears to be embedding itself and expanding its influence in Southeast Asia by leveraging local groups and networks of inspired individuals to plot, plan and conduct attacks in a number of local countries,” the study said.

Although ISIS named a regional emir in the Philippines, it hasn’t declared a wilaya (administrative state or province). “Besides being able to inspire small networks or to splinter factions from these larger, more established groups to conduct a series of one-off attacks, the Islamic State’s strategic and long-term viability in the region is likely tied to how it navigates and manages relations with the region’s jihadi old guard, and particularly those groups that have seized terrain and carved out safe-haven areas,” the study concluded.

While much of the region’s terror activity has been concentrated in the Philippines, Malaysia and Indonesia, some potential for the spread of violent extremism is developing in Burma, the CTC study found.

Although the data did not identify Burma as an important area for ISIS attacks, the study found anecdotal evidence to suggest the country may be ripe for infiltration. “The persecuted Rohingya Muslim minority has inspired Southeast Asian Islamic State networks to plan terrorist activity in Myanmar [Burma] and in their respective countries against symbols of the Myanmar government,” the CTC study said.

Hundreds of thousands of Rohingya Muslims have fled the majority-Buddhist Burma amid violent clashes with the military. Burma doesn’t recognize all Rohingya Muslims as citizens, making them one of the largest stateless groups in the world, according to a report in The New York Times newspaper. The Rohingya practice Sunni Islam and live in the poor Burmese state of Rakhine. Before they started to flee from the violent clashes with the police and military, there were an estimated 1 million Rohingya in Burma, the Times reported.

The possibility of ISIS activity in the area is supported by one failed plot in Indonesia, which was directed by an ISIS operative named Naim and was targeting the Burmese Embassy. “These dynamics suggest that the Islamic State, like other jihadi groups, view the Rohingya issue as an opportunity area,” the CTC study concluded.

After witnessing the tragedy unfold in Marawi, military and political leaders in the Indo-Pacific quickly linked arms to share resources and intelligence to stop the spread of terror. The partnerships, in many cases, are multifaceted and have the goal of eradicating violent extremism before it organizes.

• In September 2017, Australia announced that it would send troops to the Philippines to train Soldiers and share intelligence. Australian Defense Minister Marise Payne said the ISIS threat requires the cooperation of the entire region. “We are very committed to supporting the Philippines in its efforts to defend itself against terrorist threats,” Payne said, according to Reuters. “This is a threat to the region [that] we all need to work together to defeat.” Previously, in June 2017, Australia committed two AP-3C Orion aircraft to conduct surveillance over Marawi to spot terrorists. The United States sent about 300 to 500 troops to the Philippines in June 2017 to provide training in the areas of intelligence, surveillance and reconnaissance, Reuters reported. A U.S. P-3 Orion surveillance plane also provided intelligence, surveillance and reconnaissance support to the AFP’s operations.

• Officials from Australia, Brunei, Indonesia, Malaysia, New Zealand and the Philippines met in Indonesia for a one-day summit in July 2017 and signed a joint pledge to combat violent extremism. The nations agreed to establish a foreign fighter strategic forum to foster intelligence sharing. The information sharing is intended to include existing databases of foreign fighters and possibly the creation of a new database on cross-border movements of terrorists. The nations also pledged to establish terrorism laws that define as criminal acts things such as the planning of terrorist attacks and supporting foreign fighters.

• The Trilateral Maritime Patrol Indomalphi, launched by the governments of the Philippines, Malaysia and Indonesia in June 2017, aims to maintain stability in the region in the face of nontraditional threats such as piracy, terrorism and other transnational crimes in regional waters. The Southeast Asian neighbors also agreed to exchange liaison officers, form joint headquarters and share intelligence, The Philippine Star newspaper reported.

This regional cooperation and the intense military campaign by the AFP resulted in the routing of the militants by late October 2017. As the military celebrated an ISIS-free Marawi, donations of construction equipment, money and expertise poured into the Philippines from Indo-Pacific nations for reconstruction. The Philippine government announced the formation of Task Force Bangon Marawi, which is composed of multiple government agencies, to lead the recovery and reconstruction. 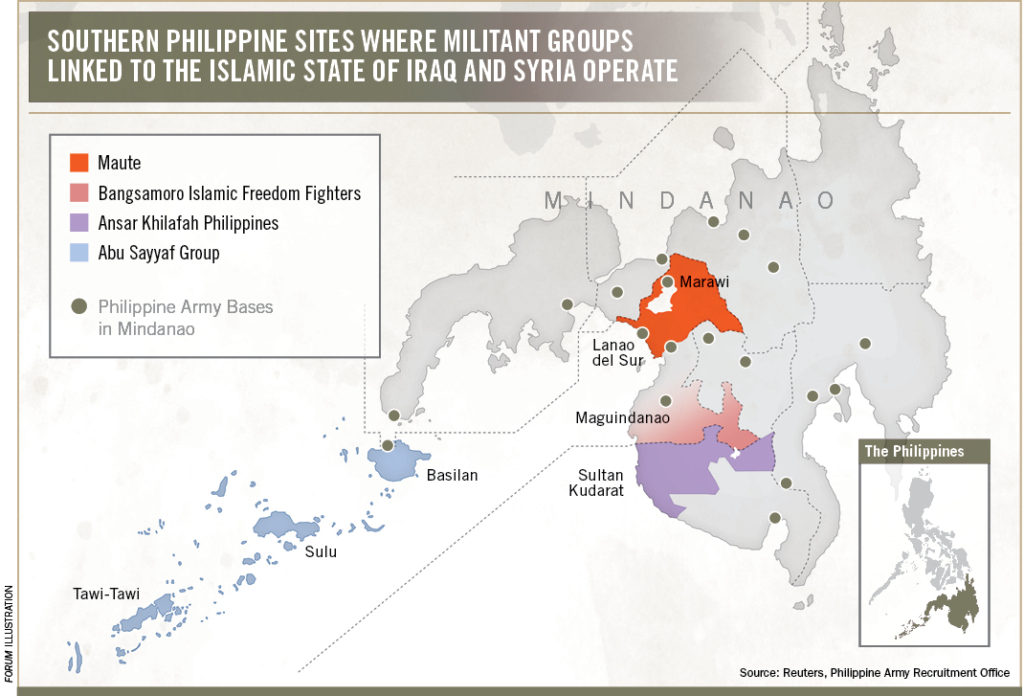 The need for this so-called whole-of-government approach that involves military and civilian cooperation, as well as transnational partnerships, is abundantly clear to military and political leaders. Singapore Defence Minister Dr. Ng Eng Hen called Southeast Asia a magnet for foreign fighters wanting to control territory. “Tens, if not hundreds, if not thousands of foreign fighters will have the skills to make improvised explosives, to have the skills for hijacking, to have the skills for kidnapping,” he said, according to a June 2017 report by bloomberg.com.

One of the reasons for this prediction is that terrorist organizations have long been entrenched in Southeast Asia, and they may soon be joined by battle-hardened fighters. “When we talk about endemic threats, we usually refer to threats like dengue or tuberculosis, which means that it’s here to stay, that despite years of effort you can’t eradicate it,” Ng said. “The problem will now come to ASEAN,” he added, referring to the 10 states that make up the Association of Southeast Asian Nations.

“It’s clear to me that [ISIS] is also rebalancing to the Indo-Pacific,” Harris said during a meeting of the San Diego Military Advisory Council, The San Diego Union-Tribune newspaper reported. Making the spread of ISIS analogous to cancer, Harris added: “Through multinational cooperation, we can eradicate this [ISIS] disease before it metastasizes.”