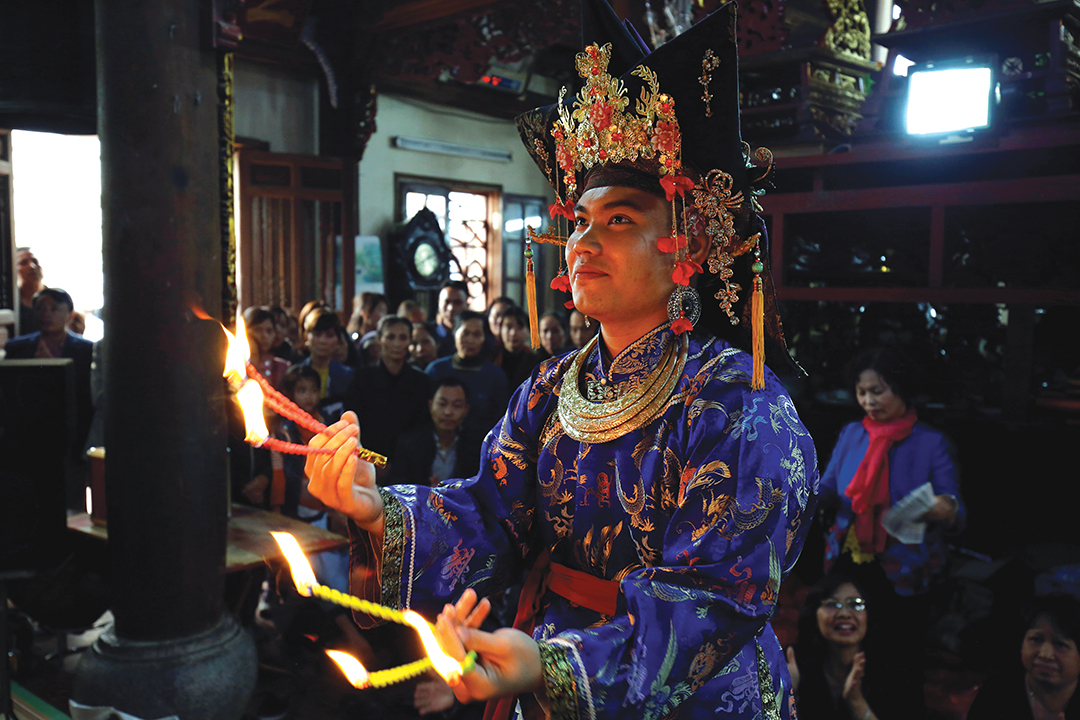 Dressed in the bright silk garments of a woman and dancing with candles between his fingers, Nguyen Duy Nam leads a temple of worshippers in a ceremony honoring mystical goddesses of forest, water and heaven.

Nam, 24, is one of a growing number of spirit mediums who perform the Hau Dong ritual of blaring noise and vibrant colors, now enjoying a resurgence after once being frowned on by the ruling Communist Party.

“It’s like an illusion, like a soul has taken over my body,” said Nam, who works in a garage in Hanoi, the capital, when he is not performing Hau Dong.

Dating to the 16th century, Hau Dong centers on a belief in the mother goddesses of three realms: forest, water and heaven. It draws from elements of Taoism, Buddhism and other religions.

During rituals, spirit mediums dance to loud folk music while appearing to transform themselves into different characters from legend and history. They display changing personalities as if different spirits have entered their bodies. Sometimes they say it feels real. “One time I couldn’t even move my body and just cried for no reason, but then I returned to normal when the next character came,” Nam recalled.

Believers kneel behind mediums and cheerfully grab money thrown by the spirits. Spread on the floor are offerings for the goddesses and the spirits, which can be anything from money to instant noodles to life-size paper horses. “It’s for every class of society, from rich to poor, from officials to citizens and from the mountain to the plain,” said architect and researcher Doan Ky Thanh.

Thanh said the appeal of the ritual broadened because it attracts participants of either gender.

Hau Dong’s status was reaffirmed in 2016 when it was recognized as part of the Cultural Heritage of Humanity by the United Nations educational, scientific and cultural organization, UNESCO.

In 2005, the Communist Party lifted a ban on Hau Dong, which until then it had regarded as superstitious. Interest in the ritual has since grown, as economic liberalization has brought greater wealth and social openness.

Hau Dong is not predominantly about money, but offerings to the spirits and temples can run into hundreds of thousands of dollars for a single ceremony. Although the state frowns on wasting money, sponsoring a ceremony can be a status symbol.

Nam said he gave up the reckless lifestyle of his youth after being called by the saints to become a medium. That spurred him to work hard in his daily occupation, paying off in the ownership of two garages.

He is dedicated to continuing as a medium, whatever anyone thinks of him dressing as a woman and summoning spirits. For now, only his close family knows it’s part of his life. “It’s my lifetime duty,” he said.