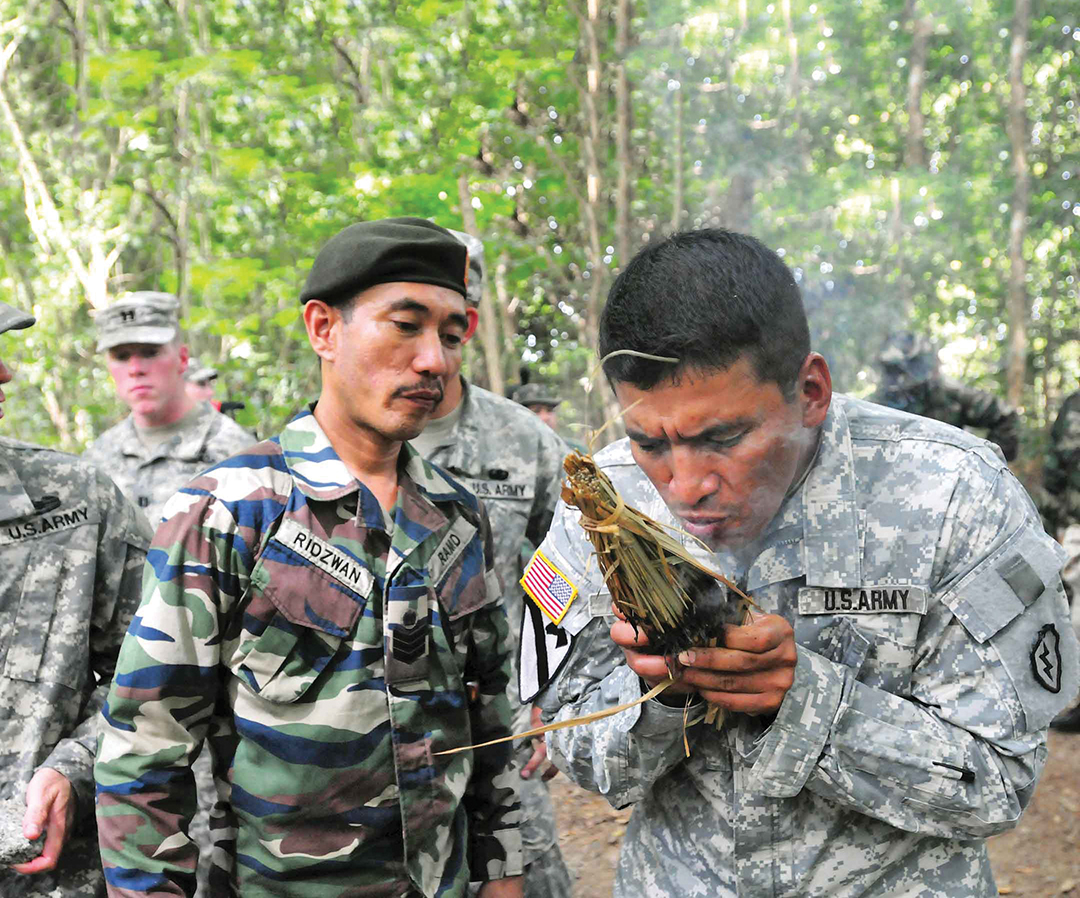 In tracking terrorists or surviving the jungle, Malaysian general collaborates with partners

Lt. Gen. Datuk Azizan bin Md Delin became field commander west for the Malaysian Army in December 2016. As a commander who is well-versed in regional and domestic defense issues, Azizan spent the previous 1.5 years as chief executive of the Malaysia Institute of Defence and Security. The Defence Ministry formed the institute after a 2009 decision to create a professional think tank to provide analytical research on defense and security issues. In his role as chief executive, Azizan served as principal advisor to the Defence Ministry and to the Malaysian Armed Forces.

Azizan, 57, joined the Armed Forces in January 1979 and was commissioned to the Royal Malay Regiment in April 1981. He earned a law degree from Malaysia’s MARA Institute of Technology in 1996 and a master’s degree in international security and civil-military relations from the Naval Postgraduate School in the United States. He attended fellowship programs on counterterrorism at National Defense University in Washington, D.C., and international security at Harvard University.

FORUM caught up with Azizan in May 2017 at the U.S. Army Institute of Land Warfare’s Land Forces of the Pacific (LANPAC) Symposium and Exposition in Honolulu, Hawaii.

Malaysia has been working with Indonesia and the Philippines to fight piracy and kidnapping for ransom in the Sulu Sea. Can you explain the Malaysian Army’s role in that process and what success you are having?

We are having problems in the Sulu Sea, which borders Borneo, east Malaysia and Sabah [a northern Malaysian state]. It’s not to say it’s a no man’s land, but it is a traditional waterway for the Sulu people. The sea is huge, and there are plenty of illegal entry points. It is basically family ties (kidnappers with family links in Malaysia, Indonesia and the Philippines), so historically it is very difficult for us to properly stop them.

There is a lot of kidnapping for ransom. They are sort of like warlords. There are so many small islands, and they are hopping from island to island because nobody’s on the islands. We put up sea bases in a joint effort with our oil company, Petronas. We use an oil rig and modified that oil rig to become a sea base that can accept helicopters and then become a forward base for our Navy and Special Forces. The main aim of that base is to cut off the intruders if they are kidnapping somebody or trying to run away. We put in a deterrent factor, showing that we are there. We also have a mobile base that we can move around.

We cannot totally stop their activity. That’s why we came up with a trilateral agreement. [In June 2017, Indonesia, Malaysia and the Philippines announced plans for trilateral naval patrols as a show of cooperation to stop terror groups inspired by the Islamic State of Iraq and Syria.] As for the [Malaysian] Army’s role, we are occupying a small island and we are at our shore to ensure that if they come in and try to kidnap anybody, we are there. We divide the area between the military and the police to cover as much territory as we can. At the moment, it seems that we can contain the activity. It is quite impossible to be successful 100 percent, but their activity is decreasing very much.

How are the Malaysian Armed Forces prepared to deal with the return of terrorists affiliated with ISIS?

We are prepared for it. We hope they stay there [in Syria and Iraq] or that somebody finishes them off over there. But if they come back, they are not going to come back to a place that is in order, so they will go maybe to the southern Philippines. It’s not to say it is lawless, but the authority over there comes in and then goes out. The area belongs to them [terror groups]. Most likely they will come back to that area. That is our prediction.

How have the U.S. Army and the Malaysian Army worked together in fighting terrorism?

Malaysia is known for having one of the best jungle warfare training schools in the world. You send mobile training teams to Hawaii to train Soldiers from the U.S. Army. There are elements of basic survival training in the jungle climate that can’t be practiced as easily in Hawaii as in the jungles of Malaysia. What does the training in Malaysia entail?

That [jungle warfare] is our skill. The training involves how to survive when you are alone. You learn how to eat snake, how to eat frog.

What countries come to Malaysia to receive jungle warfare training?

Malaysia hosted the 40th Pacific Armies Management Seminar (PAMS) in September 2016, drawing leaders from 30 armies. How did the Malaysian Armed Forces benefit from the event?

Of course, when given the opportunity to host it, we want to put forth the very best. And when people acknowledge that we hosted PAMS successfully, we feel very satisfied about it. Secondly, whenever there is a PAMS, that means chiefs of army converse. They have exchanges of ideas. And by doing so, we improve our bilateral or multilateral relationships.

Why do you attend conferences such as LANPAC?

It’s a convergence of chiefs of army. My chief attended last year. … This year, he sent me. We can gather the latest information about military strategy. By attending LANPAC, when I go back, I’ll make a report and disseminate that information to the Army.