The Indo-Asia-Pacific region has long been an area of strategic importance to the United States with respect to trade, economics and global security. Historically, the U.S., while appreciative of partner nations and willing to work beside them, has predominantly worked unilaterally for security and deterrence. However, during the past two decades, free market globalization and global societal changes, coupled with U.S. force-structure changes, have created a shift in that philosophy to one in which the U.S. recognizes that allies and partners are a critical enabler to deterrence posture. While U.S. forces are equipped and trained to operate unilaterally to defend U.S. interests and international norms, regional allies and partners provide a means to create synergistic and force-multiplying effects, especially with respect to deterrence operations.

At the end of the 20th century, military deterrence primarily was used to describe the prevention or dissuasion of weapons of mass destruction programs to include proliferation, weaponization and use. This definition is still vital to national security. Allies and partners rely on U.S. nuclear deterrence to dissuade the use of nuclear weapons and prevent nuclear proliferation. 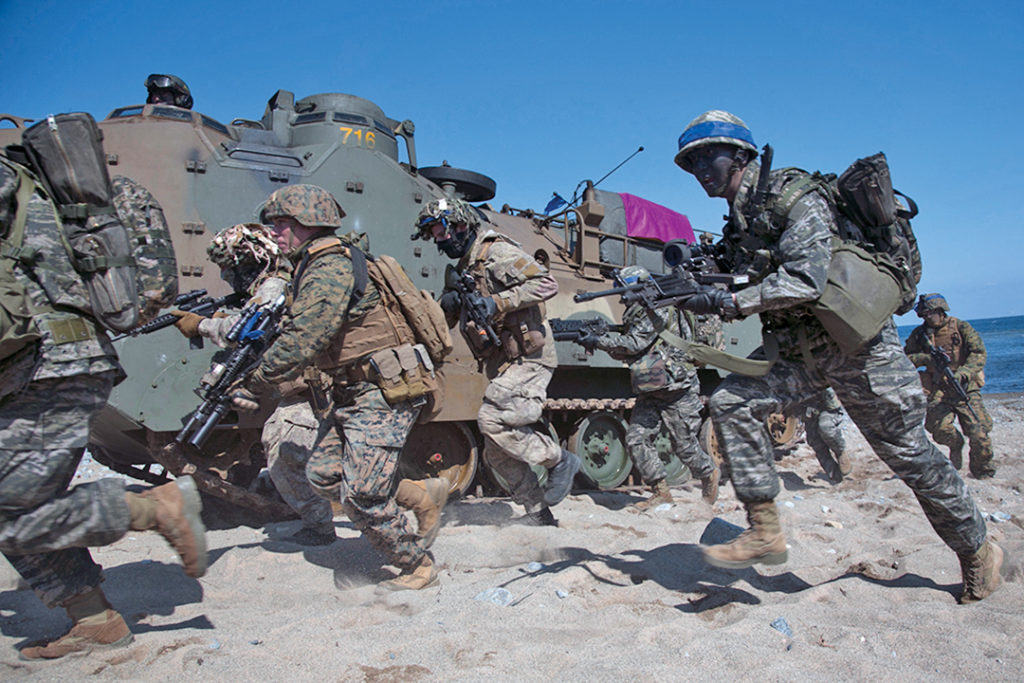 In turn, the U.S. works with allies and others to encourage them not to pursue their own nuclear weapons, which could have destabilizing impacts on the region. An example of this effort is the ongoing situation on the Korean Peninsula where North Korea has demonstrated its nuclear capabilities and has threatened weaponization as a form of hostility toward its neighbors, including the Republic of Korea (ROK) and Japan. The ROK and Japan have both taken into account their partnership with the U.S. and an adherence to international laws and norms to counter North Korean proliferation by not pursuing nuclear weapons of their own to counter North Korea.

Deterrence does not revolve around a nuclear focus, and in recent years common discussion has returned to a more broad and classical definition. Deterrence encompasses operations and activities designed to dissuade a state or nonstate actor from pursuing a course of action that could be seen as threatening to U.S. and partner nation interests. In terms more relevant to the Indo-Asia-Pacific region, this would be actions in violation of customary international laws or norms. Under this more broad definition, the ROK and Japan are critical partners and allies to U.S. deterrence operations.

The recent partnership between the ROK and Japan — in combination with U.S. operations in the face of ongoing aggression by North Korea — is an example of the importance of allies and partners in deterrence operations. In March 2017, the U.S. used Continuous Bomber Presence (CBP) B-1 bombers and conducted a routine training mission from Guam to the ROK. 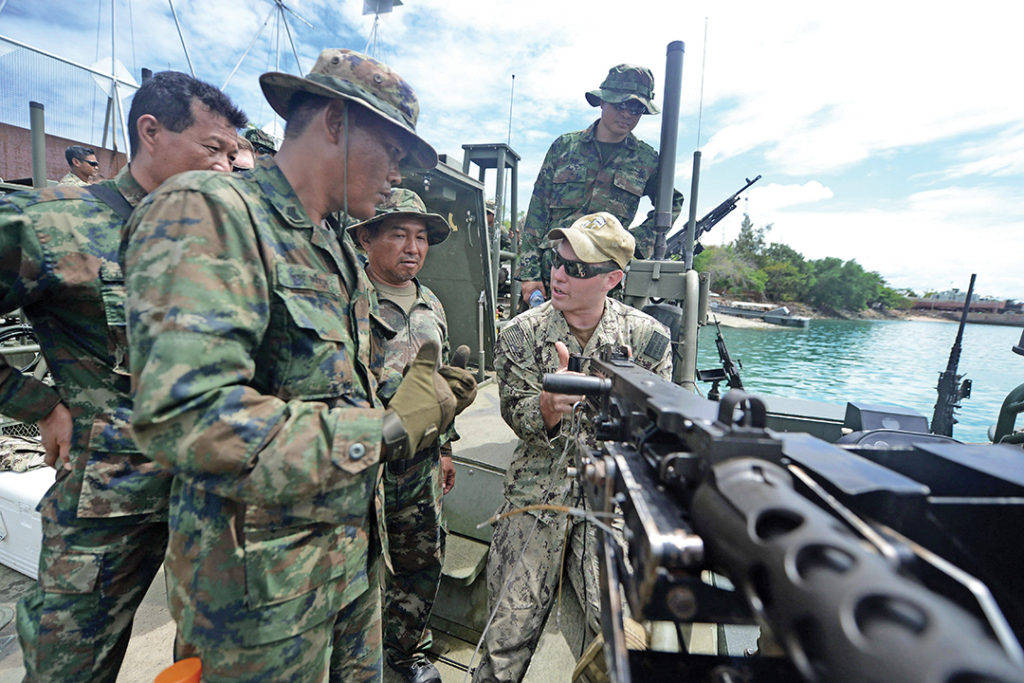 During this mission, the B-1s integrated with Japan Air Self-Defense Force fighters in formation training in the East China Sea prior to reaching the Korean Peninsula. After departing the formation with the Japan Air Self-Defense Force fighters, the B-1s later rejoined with ROK Air Force fighters for similar training over ROK-controlled airspace. Both countries operated bilaterally with the U.S., and planning for this mission required detailed coordination among all three countries. While the ROK and Japan share a history of diplomatic and military conflict, their current partnership and communication demonstrate the ability for countries to work together to peacefully solve problems and the importance of moving beyond past grievances to pursue shared interests. The ROK, Japan and U.S. can then focus on coordinated ways to deter North Korea’s aggression while ensuring mutual defense and support.

This same spirit of cooperation applies to other areas of the Indo-Asia-Pacific region. The South China Sea is an area where allies and partners are critical to deterrence objectives. It is a vital international waterway for a significant portion of the global economy where freedom of navigation and adherence to international norms are in the best interest of all regional nations. The U.S. supports the cooperation among all nations in this region to settle disputes via communication following the principles of the United Nations Convention on the Law of the Sea and internationally recognized bodies such as the International Tribunal for the Law of the Sea. 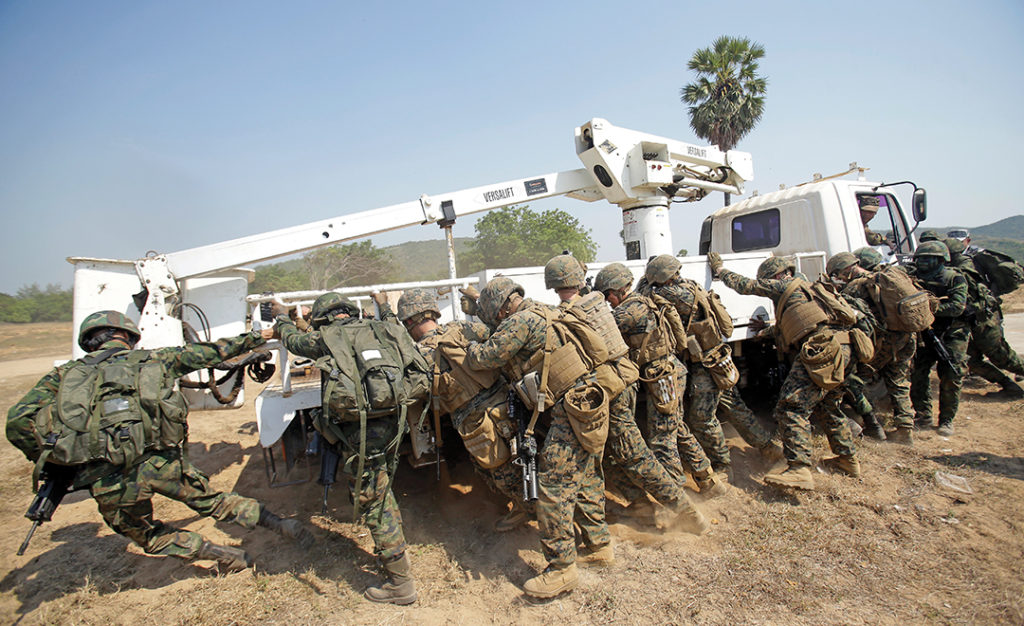 The U.S. also maintains several partnerships in the region with countries such as Australia, Indonesia, Malaysia, the Philippines, Singapore and Thailand. Vietnam is a key strategic and economic partner despite the previous conflict between the two countries. The U.S. supports the Association of Southeast Asian Nations, a humanitarian, economic and key leader engagement organization. These 10 Southeast Asian states promote a growing intergovernmental, close-knit partnership that ensures all countries have equal access to shared international airways, waterways and resources.

These partnerships demonstrate the collective understanding of partner nations with respect to the importance of international cooperation and peaceful resolution of disputes, while adhering to international laws and norms. Working together in partnership with the U.S. is critical to ensuring continued deterrence in the South China Sea.

To maintain national security and preserve national interests, the U.S. will continue to work with partners and allies across the Indo-Asia-Pacific region on a daily basis. These partnerships provide the most efficient means of demonstrating resolve with regard to respecting and defending access to international air, waterways, global common natural resources and protecting exclusive economic zones, while safeguarding territorial sovereignty. Clear multilateral cooperation will deter aggression and ensure regional nations understand it is not in their best interest politically, economically or militarily to resolve differences independently by force.