To protect her low-lying island home from climate change, Kathy Jetnil-Kijiner is building an unusual army.

The poet, performance artist and teacher at the College of the Marshall Islands, seeks out promising young people in the Pacific nation’s villages to train them to apply for grant money to help families cope with worsening extreme weather and rising seas, and find innovative ways to protect their communities and threatened culture.

“Our big concern is the loss of culture. We’re so rooted in our land. We could point at a reef and know the story behind it, the fishes there. If we lose the reef, we lose all the stories, all the knowledge,” she said. “This program is about safeguarding that knowledge and preserving it for the future.”

Jetnil-Kijiner, who was among her country’s 2016 delegation to United Nations climate talks, came to prominence in 2014, when she performed one of her poems — a heartfelt letter to her baby daughter, Matafele Peinem — at a climate change summit hosted by the U.N. chief in New York. 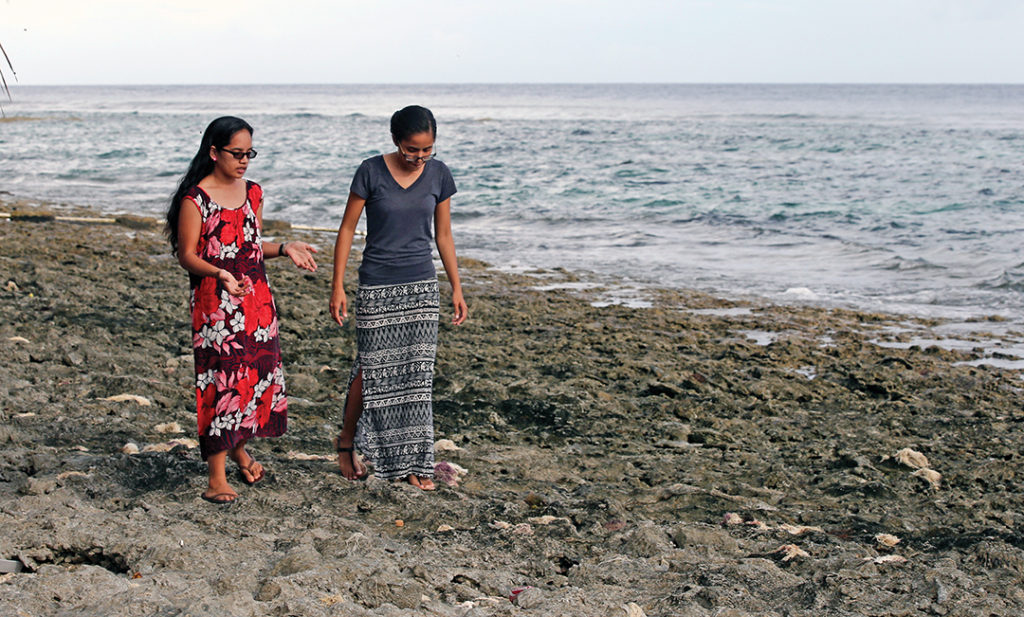 Poet Kathy Jetnil-Kijiner, right, and climate change activist Milan Loeak walk along the shore at low tide in Majuro Atoll in the Marshall Islands in November 2015. [THE ASSOCIATED PRESS]

Now the 28-year-old — who published a first book of her poetry in February 2017, and whose mother, Hilda Heine, became the nation’s first female president in 2016 — hopes the experiences of other islanders could be a driving force to spur more rapid international action to curb climate change and prevent countries like hers from being eaten up by rising seas.

“We’re the ones living these experiences,” she said. “I recognize poetry is a weird thing to have in this climate world, but it seems to work. And I want to do more of what works.”

Most of her students don’t dwell much on climate change, she said. However, for them — and for her own family — it’s becoming harder to ignore. The nation of about 53,000 people and more than 1,000 atolls and islands has just emerged from one of the worst droughts she can remember. In 2014, one of her cousins lost the house she had lived in all of her life to flooding, she said.

For many people, “it’s something you’re waiting to see happen. You never know when the high tide will hit, but you’re prepared for it,” she said. “When there’s a high-tide warning, everybody’s worried about the sea wall.”

The result of these growing pressures, she said, is that the government — which had always focused on developing the country — is slipping into a different kind of mindset.

“It’s not development anymore. It’s more like preservation,” Jetnil-Kijiner said. “It’s changing how we think of our country, how we prepare for its future.”

Just how at risk the country will be from sea-level rise is evident in its geography, with its 181 square kilometers of land sitting an average of 2 meters above sea level now.

As rising seas fuel larger “king tides,” which regularly sweep the island, as well as more severe storm surges, roads and homes are going underwater more often, leading some to collapse or be abandoned.

Scientists predict the world could see as much as 2 meters of sea-level rise by 2100 or sooner, at current rates of climate change. Already some Marshallese have migrated to join growing communities of fellow expatriates in Hawaii and elsewhere in the United States.

The changes Jetnil-Kijiner’s students see make them increasingly anxious. At a youth arts camp she organized, one picture drawn showed the country’s capitol building, in Majuro, underwater. Much of the poetry young people produce, she said, “comes out of their fear of losing their culture and their island.”

“They don’t know how to use that fear. That’s why we’re trying to empower them,” she said. “They shouldn’t just be seen as victims.”

In schools across the islands, teachers are now discussing climate change with their students, she said.

Jetnil-Kijiner’s “earth champions” — young people trained through her youth nonprofit group Jo-Jikum — are being taught practical skills, including how to navigate the complicated process of making applications for climate change funds.

“A lot feel we will have to move at some point,” she admitted. “Lots of the outside rhetoric they hear tells them that. But I tell them it’s not over yet. There’s still time to fight.”