For Russia, the South China Sea issue is where two levels of its policies intersect

Russia’s policies regarding the South China Sea (SCS) dispute are more complex than they might seem.

Moscow’s official position presents Russia as an extraregional actor with no stakes in the dispute. According to the Russian Foreign Ministry, Russia “had never been a participant of the South China Sea disputes” and considers it “a matter of principle not to side with any party.” However, behind the facade of formal disengagement are Russia’s military buildup in the Indo-Asia-Pacific region and the multibillion-dollar arms and energy deals with the rival claimants.

These factors reveal that even though Moscow may not have direct territorial claims in the SCS, it has strategic goals, interests and actions that have direct bearing on how the SCS dispute evolves.

One-fourth of Russia’s massive military modernization program through 2020 is designated for the Pacific fleet, headquartered in Vladivostok, to make it better equipped for extended operations in distant seas. Russia’s military cooperation with China has progressed to the point that President Vladimir Putin
called China a “natural partner and natural ally” of Russia.

The two countries’ most recent joint naval exercise — Joint Sea 2016 — took place in the SCS and became the first exercise of its kind involving China and a second country in the disputed sea after The Hague-based tribunal ruling on China’s nine-dash line territorial claims.

However, Russia’s relations with Vietnam are displaying a similar upward trend: Russia-Vietnam relations have been upgraded to a “comprehensive strategic partnership” comparable to the Russia-China relationship. Russia and Vietnam are developing joint gas projects in the SCS, and Moscow also is trying to return to the Cam Ranh naval base and to sell Hanoi advanced weapon systems that enhance Vietnam’s defense capabilities.

Moscow’s actual behavior, therefore, hardly conforms to the neutrality of its official statements. The simultaneous enhancements of military cooperation with both Beijing and Hanoi — two of the major direct disputants in the SCS — make Russia’s intentions hard to interpret and require a more holistic framework that encapsulates different levels of Russia’s foreign policy interests. Great powers play multilevel foreign policy games that may overlap in specific areas. For Russia, the SCS issue is where two levels of its policies — systemic anti-hegemonic balancing and nonsystemic regional hedging — intersect. 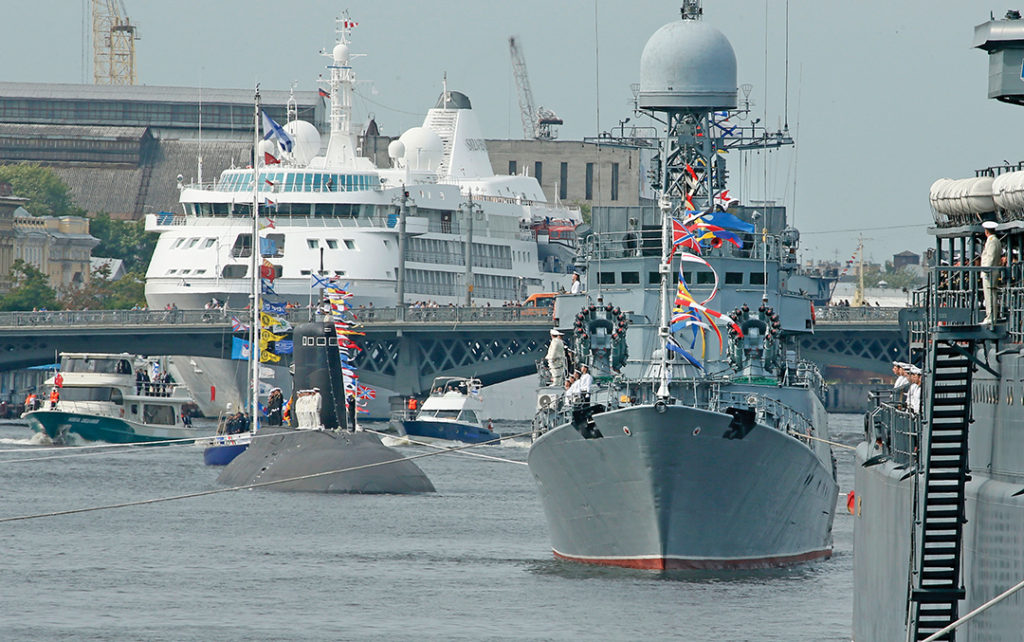 Russian military ships and a submarine are moored at the Neva River during Navy Day in St. Petersburg, Russia.
[THE ASSOCIATED PRESS]

The first level — systemic balancing — is driven by the global power distribution and perceptions of major threats. As a systemic balancer, Russia challenges the U.S.-led unipolarity in multiple ways, as evidenced by its policies in Georgia, Ukraine and Syria. The drive to balance the system leader (the United States) makes Russia seek alignment with China, which, like Russia, also challenges American unipolar dominance. Thus, Russian and Chinese assessments of external threats coincide in that both countries consider U.S. policies threatening.

The pressure originating from the U.S.-led international system and the resultant incentives to resist it generate a strong bottom line that pushes Russia and China together. From this perspective, the SCS for Russia is a part of a bigger global game that dictates that Russia does not go against China’s interests, but rather provides some tacit, if not open, support.

The second level — regional hedging — is motivated by domestic and regional considerations and materializes in a combination of policies aimed at diversifying Russia’s regional links and averting potential instability that could affect Russia’s economic interests in the Indo-Asia-Pacific. It also heads Moscow’s commercial desire to profit from energy, infrastructure and arms deals.

By strengthening connections with Hanoi, including arms exports, military-technical cooperation and joint energy projects, Moscow creates a more balanced power-and-interest configuration around the SCS and simultaneously diversifies its portfolio of Asian partners, with Vietnam also serving as an inroad to the Association of Southeast Asian Nations community.

This explains why Russia, while not opposing China’s policies, also appears sympathetic toward Vietnam’s concerns in the SCS. The intersection of the two levels creates the intrinsic ambiguity of Russia’s SCS policies.

The main implication of this “two-level game” is that the nature of the SCS dispute for Russia — as well as Russia’s corresponding policy responses — is a variable rather than a constant. The more the SCS dispute deviates from a regional issue of sovereignty into the realm of China-U.S. confrontation, the more Russia’s behavior in the region carries the features of anti-unipolar balancing. Conversely, the less the United States is involved, the more Russia’s policies in the area remain aloof from the system-level balancing and the more likely they are to carry features of regional hedging.

So far, the two layers of Russia’s policies in the SCS have worked well without contradicting each other: Vietnam has benefited from cooperation with Russia not only because such cooperation is valuable in its own right but also because given the closeness of China-Russia relations, it provides an extra gateway for improving relations with China, which Hanoi values. Plus, Hanoi has long experience using Russian arms and military equipment. Russia’s policies also resonate with Beijing’s strategic calculations. While the Russia-Vietnam strategic partnership with its strong military component may look anti-China, in reality it works for Beijing’s interests because it helps to prevent the consolidation of a Hanoi-Washington alliance.

While being unhappy about Russia’s arms transfers to Vietnam, Beijing recognizes that a decline or termination of such transfers would result in Hanoi shifting from its current policy of diversifying military contacts to a stronger lean toward Washington. This shift would close the U.S.-led containment ring around China. Therefore, despite the emphatic resistance against the internationalization of the SCS dispute, Beijing accepts Russia’s greater involvement as well as Russia-Vietnam military cooperation.

Russia, by engaging China and Vietnam, realizes its regional and global goals. It increases its stake in the Indo-Asia-Pacific balance of power, slows down the U.S.-Vietnam entente and shapes the SCS dispute so that there is more room for multilateral negotiations. For Russia, maintaining the status quo, however imperfect it is, is better than dealing with a victory of one party over another.

The East-West Center originally published this analysis, titled “The Two Levels of Russia’s South China Sea Policies,” in a March 2017 edition of Asia Pacific Bulletin. The views expressed in the Asia Pacific Bulletin are those of the author and do not necessarily reflect the policy or position of the East-West Center or any organization with which the author is affiliated. This article has been reprinted with permission and edited to fit FORUM’s format.