A series of bombings struck five provinces in Thailand, including the popular Hua Hin tourist resort, on August 11, 2016. These attacks used a combination of firebombs and improvised explosive devices (IEDs) to kill four and wound 27. On September 2, 2016, an IED detonated at a night market on Mindanao Island in the Philippines, killing 14, including a 12-year-old child and nine police officers, and wounding 67. These events demonstrate that IEDs remain a constant threat across the Indo-Asia-Pacific region.

In 2016, within the U.S. Pacific Command’s (USPACOM’s) area of responsibility (AOR), 1,123 reported IED events, involving a range of civilian and government targets, caused more than 1,300 casualties. Violent extremist organizations (VEOs) operating throughout the region employ IEDs in a variety of ways with demonstrated effectiveness. In addition to the IED efforts by local extremist groups, the Islamic State of Iraq and Syria (ISIS) continues to transform the threat landscape by influencing local attacks to achieve global goals. Prime examples include the Jakarta attacks in January 2016, killing two and wounding 24, and the July 2016 Holey Artisan Bakery attack in Bangladesh that killed 29 and wounded 50, mostly police personnel. Coupled with increasingly violent ideologies, the availability of new technologies such as unmanned aerial vehicles to deliver IEDs and the use of increasingly sophisticated electronics provide adversaries the means to elevate their effectiveness. With new technologies, the continued use of IEDs by local VEOs and ISIS’ evolving presence in the region, USPACOM drives a requirement for a dedicated capability to identify emerging IED threats and provide effective training to counter these threats in the Indo-Asia-Pacific. 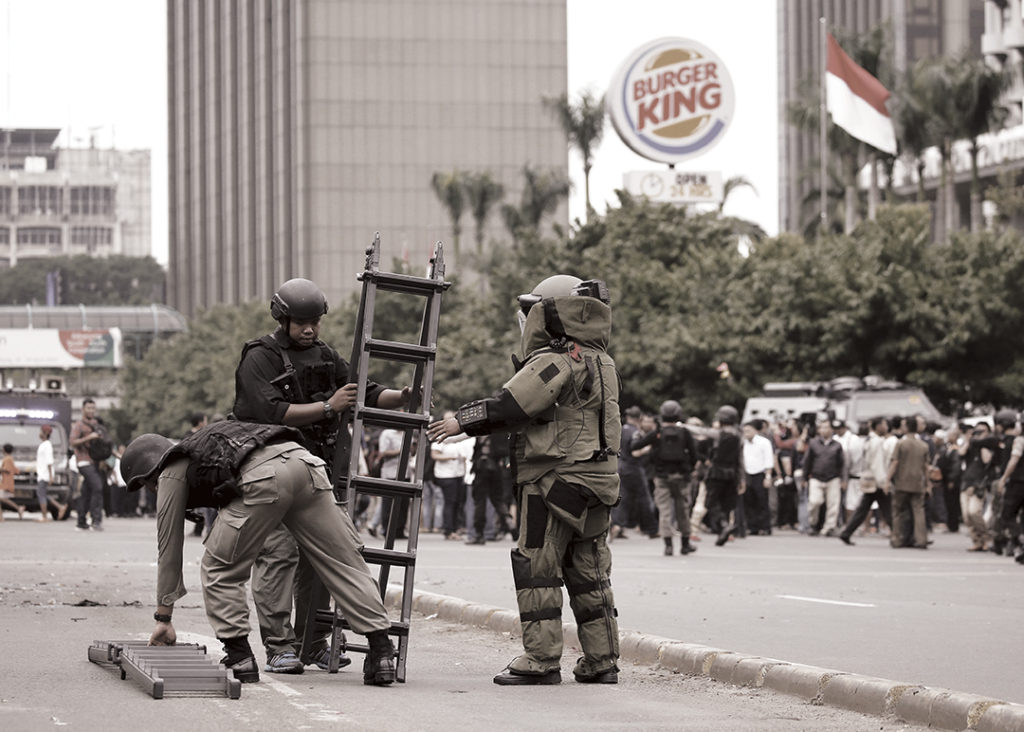 The wide range of countries and cultures across the Indo-Asia-Pacific region provide an assortment of IED tactics, techniques and procedures (TTPs). IEDs in the USPACOM AOR range from relatively simple pipe bombs crafted with construction materials to sophisticated radio-controlled devices that employ commercial-grade explosives and additional fragmentation enhancements for maximum effect. VEOs tend to rely on locally acquired material and training for their devices. In areas where ordnance or commercial-grade explosives are not readily available, groups have adapted by using available components to produce homemade explosives such as triacetone triperoxide, used in the Paris and Brussels terrorist attacks. Increasing ISIS influence in the region requires constant vigilance for IED TTP migration from devices currently used in Syria and northern Iraq. The use of unmanned aircraft as a delivery system for IEDs and sophisticated booby-trapped devices targeting explosive ordnance personnel are two techniques recently employed against Iraqi forces that pose a future threat for military and security forces in the Indo-Asia-Pacific and require constant monitoring.

The continued deployment of the U.S. military throughout the region where IEDs remain a threat to military and civilian personnel requires an aggressive training program. Accordingly, the fusion center’s training division develops and conducts Indo-Asia-Pacific-tailored C-IED training in accordance with higher headquarters guidance and the fusion of current intelligence to prepare U.S. forces for operations in an IED environment. In addition, the fusion center conducts subject matter expert exchanges (SMEEs) and trains partner nation forces using the same principles to further interoperability. For example, the Master C-IED Train-the-Trainer Course is a focal point of these interoperability efforts and incorporates standards used to familiarize U.S. and partner nation military. This three-week course provides units with leaders capable of training their formations on current C-IED equipment, IED TTPs, and integrating IEDs as part of the training environment.

This enables regional militaries to adopt the same C-IED terminology and practices, thereby enhancing their interoperability with other forces. The training also results in developing the C-IED proficiency of U.S. and partner nation members to the level that they are capable of training their forces when they return to their units with a much higher degree of effectiveness. APCFC has successfully trained students in Bangladesh, Japan and Thailand, as well as Marines and Airmen from the U.S. Marine Corps and U.S. Air Force.

IrWAC conducts intelligence analysis and production against irregular warfare threats and VEOs in the Indo-Asia-Pacific. It is a unique component of the APCFC and not found in any other Army service component command around the globe. The IrWAC collaborates with partner nations and interagency organizations to illuminate the threat in order to disrupt facilitation networks. They also provide dedicated intelligence products to support tailored C-IED training and SMEEs to enhance U.S. and partner nation forces survivability and build partner nation capability. An example of these products is the monthly IED report, which focuses on irregular warfare across the Indo-Asia-Pacific region, specifically highlighting IED attack and casualty trends and VEO activity. The reports are available to JIIM personnel at http://www.usarpac.army.mil/apcied/IEDMonthlyMain.htm.

The partner nation engagement section builds capacity and fosters or maintains relationships through SMEEs, key leader engagements, interoperability reviews, follow-on training and other events. It’s APCFC’s way of sharing the U.S. military’s hard-won experience operating in the IED environments of the Iraq and Afghanistan battlefields. During partner nation engagements, the APCFC aims to develop capacity and interoperability across all warfighting functions and tailors engagement strategies based on host nation capabilities and desired end states. By following the same train-the-trainer format it uses with U.S. forces, the APCFC empowers partner nation unit commanders to conduct C-IED training tailored to their unit’s strengths and weaknesses and their operating environment.

The evolving nature of warfare points to an adversary’s ability to employ individuals to operate within the local populations, refugee camps and detention facilities to disrupt friendly force operations. The fusion center’s newest section, IDA, provides an optimal tool for analyzing actors and networks. It works toward establishing and characterizing the identity of persons of interest, known adversaries and other relevant actors, such as IED manufacturers, operating in the region. IDA accomplishes its objective of differentiating entities using biometrics, forensics, document and media exploitation, and identity intelligence. The APCFC provides training on multiple hand-held biometric enrollment devices such as the Secure Electronic Enrollment Kit II (SEEK II) and SEEK Avenger. More important, the APCFC’s IDA Section can weave the enrollment data from these devices into training vignettes to support larger Attack the Network/Network Engagement collective training scenarios. The APCFC trains U.S. forces and collaborates with allies and partner nations to enhance IDA capabilities. The IDA program relies on team members’ expertise in biometrics, site exploitation and intelligence reports to streamline information and evidence from the point of collection through analytical centers to the exploitation facilities. The APCFC IDA program is postured to provide support to a variety of missions, including counterterrorism, counterinsurgency, homeland defense, force protection and support to civil authorities. 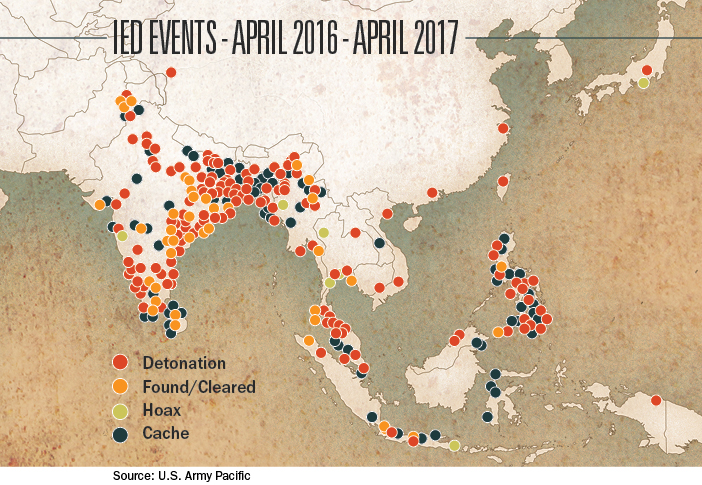 An example of an IDA capability is the Forensics Exploitation Lab Pacific (FXL-P) at Schofield Barracks, Hawaii. It is capable of forming the central physical and procedural structure of a combined exploitation center in support of a combined joint task force. The FXL-P provides biometric, DNA, latent fingerprint, explosive triage, explosive and drug chemistry, electronic engineering, firearms and tool mark analysis with an inclusion of weapon technical intelligence and identity intelligence. Deployment of the expeditionary FXL-P assets during operational preparation of the environment supports the training of U.S. forces and engagements with partner nations through the inclusion in combined exercises. The FXL-P’s capabilities proved vital to commanders in Iraq and Afghanistan by providing the evidence that removed scores of VEO members from the battlefield. Another example of an IDA capability is the biometric-enabled intelligence team, which supports organizations with biometric tracking intelligence packages to deliver specialized biometric products for the purpose of monitoring and/or neutralizing the operational capacity of individuals, cells, and/or networks of interest and transnational threats.

The threat in the Pacific is real; the fusion center continues to work with other military services, government agencies, partner nations and allies to counter the threat resulting in regional security and stability. JIIM personnel’s preparation for combating the IED threat during peacetime will reduce the strategic impact of IEDs on a future battlefield.

Commanders in all types of military formations need to be ready for the ever-evolving IED threats. Capabilities must also be tied to real-time intelligence and analysis. The APCFC can provide training and awareness to help commanders protect their forces and defeat terrorists. For more information, contact the APCFC at usarmy.shafter.usarpac.list.apcfc-requests@mail.mil.