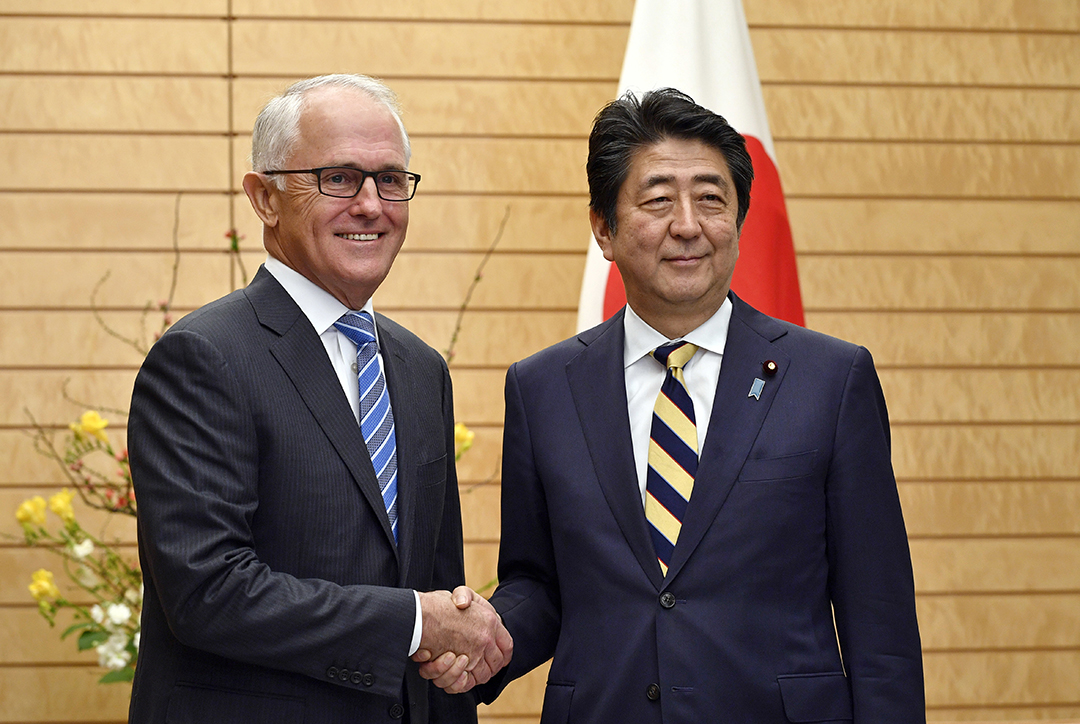 Australia and Japan are expected to sign off on major points of a visiting forces agreement (VFA) by mid-January 2018 in a pact that could lead to more effective military cooperation.

Newspapers from both countries report that Australian Prime Minister Malcolm Turnbull and Japanese Prime Minister Shinzo Abe plan to meet in Japan to finish the agreement, which has been discussed for three years.

A VFA defines the legal status of foreign forces participating in military activities, such as joint exercises or relief missions. In this case, it will exempt customs on gear needed for military operations and give permission to members of foreign militaries to transport arms and ammunition, according to a report by the Yomiuri Shimbun newspaper. Japan wants to start negotiations on a similar agreement with the United Kingdom by the end of 2018 and fully implement the VFA with Australia by the end of 2019, the newspaper reported.

The agreements are part of a broader effort by Tokyo to deepen international security cooperation to bolster Japan’s defenses should conflicts on the Korean Peninsula and in the East and South China seas worsen. If completed, the deal with Australia would be Tokyo’s first VFA, although it has what is called a status of forces agreement with the United States based on the long-term presence of U.S. forces in Japan, The Sydney Morning Herald newspaper reported.

In the talks between Australia and Japan, the governments agreed that when military personnel commit crimes, the law of the country where the crime was committed will take priority, the Herald reported.

The agreement is in keeping with Japan’s efforts in recent years to conduct joint drills with foreign forces. In 2015, Japan’s Ground Self-Defense Force participated in U.S.-Australia joint exercises for the first time. Japan’s Air Self-Defense Force also plans to hold its first joint drill with the Royal Australian Air Force in Japan in 2018, the Herald reported.

The bilateral agreement is just the latest example of Indo-Asia-Pacific nations working together to counter actions that include the testing of nuclear weapons and intercontinental ballistic missiles by North Korea and aggressive territorial claims by China in the South China Sea.

Japan and South Korea have begun sharing intelligence on North Korean weapons programs, and they also teamed up in September 2017 to call for stronger actions against North Korea.

South Korean President Moon Jae-in and Abe agreed to cooperate on seeking tougher United Nations sanctions against North Korea, which conducted its sixth nuclear weapons test in September 2017. Pyongyang claimed the detonation was from a thermonuclear weapon built for missiles that can reach the U.S. mainland. Working with the United States, South Korea in the final months of 2017 added more launchers to a missile-defense system aimed at defending against North Korean threats.