Interpol urged all countries in November 2016 to obtain biometric data from fighters for the Islamic State of Iraq and Syria and other extremist groups to help law enforcement track them down, especially when they return home.

Interpol Secretary-General Jurgen Stock said in an interview that the international police organization only has biometric data — fingerprints, DNA, iris scans and the like — for about 10 percent of the 9,000 foreign terrorist fighters in its database.

Stock said Interpol is helping countries to develop biometric technology not only to identify fighters from extremist groups but criminals as well.

He cited the 2016 case of a French police station attacked by a terrorist who had traveled across Europe using 20 different identities — something that could have been thwarted with biometric data.

Stock said there are an estimated 20,000 to 30,000 foreign terrorist fighters from almost all over the world — and about 15,000 from more than 100 countries remain mainly in Syria and Iraq. 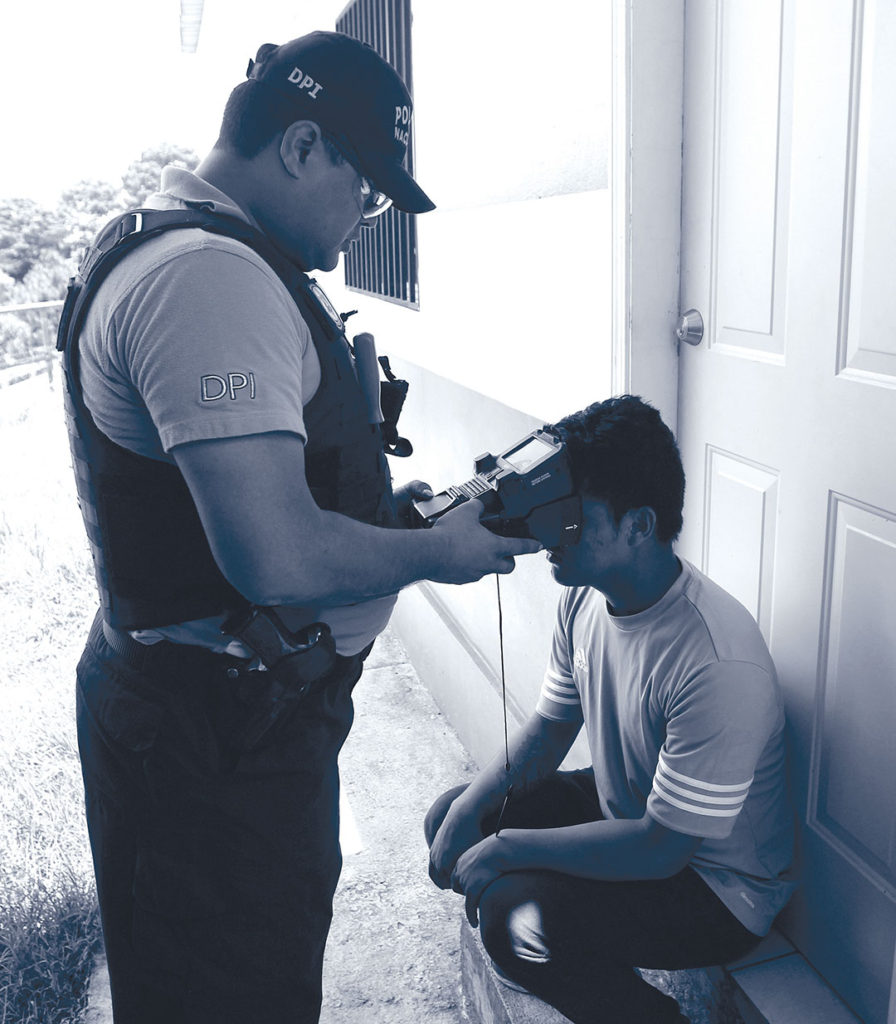 A Honduran police officer scans the iris of a Nepali citizen who entered the country illegally. [Reuters]

With 9,000 names in the Interpol database, this means that about 6,000 of the extremist fighters are not on an international register where they could be tracked, which Stock said is a “serious gap.”

He said the database grew rapidly when it started in 2013 with just 12 files and will hopefully continue to add names and biometric data. The Interpol chief went to the United Nations from the organization’s headquarters in Lyon, France, to speak to the General Assembly, which adopted a resolution expanding Interpol’s cooperation with the U.N.

Stock called the internet “a virtual university of terrorism,” where extremist groups attract and radicalize would-be fighters and where information on building or buying bombs and explosives is readily available.

“We are fighting a terrorist network or an organized crime network with a law enforcement network,” he said.

The fight is not easy, Stock said, because of legal issues that differ in various countries, including the sharing of information and the difficulties in ensuring that relevant data gets to police, border guards and other officials who need it.

He said the increasing use of encrypted websites by extremist groups is also posing “a huge challenge” to law enforcement authorities trying to conduct surveillance or track fighters and potential terrorists.

The dark net has also become a major trading place for weapons and explosives used by terrorists, Stock said.

“Investigations into the dark net are not impossible, of course,” he said. “We are developing our tools, but it creates a challenge.” Stock also said Interpol is cooperating with industry on new tools “to make sure that there’s no safe haven for terrorists or criminals.”