During the past three years, the Royal Malaysia Police (RMP) have arrested more than 250 people for terrorist-related offenses. In 2016 alone, there were 115 arrests, a 40 percent increase from the 82 arrests in 2015. In 2014, there were 59 arrests and just four in 2013. Police also thwarted 14 attempted attacks during this period. One, however, escaped the dragnet in July 2016, when a hand grenade was tossed into a nightclub outside Kuala Lumpur, injuring eight people. Although police initially dismissed it as a terror incident, they later confirmed the bombing was the first Islamic State of Iraq and Syria (ISIS)-linked attack in the country.

While much of the terrorist landscape in Malaysia in recent years has been focused on ISIS — also known as Daesh — and its cohorts in Syria and Iraq, the terrorist threat itself is almost as old as the country. Apart from the communist terrorists who held the country in an official state of emergency for a total of three decades during two periods since independence in 1957, the RMP have also monitored the presence of numerous other terrorist groups whose causes run the ideological gamut. These range from separatist groups such as the Liberation Tamil Tigers of Eelam and Babar Khalsa International to regional ones such as Darul Islam and Jemaah Islamiyah.

What ISIS and groups like it represent is an evolution in the terrorist threat environment. In Malaysia, this is evident in four unfolding trends: a widened appeal across demographics, suicide terrorism, autonomy and a relatively abbreviated recruitment process.

Afghanistan in the 1980s and Bosnia in the 1990s drew Malaysian male fighters, but Syria has also appealed to women and families. Of more than 60 known Malaysians who traveled to Syria and are still alive, 12 are women and 17 are children (nine are boys and eight are girls). Whole families have uprooted themselves and traveled to Syria in an imagined tradition of the hijrah, the journey of the Islamic Prophet Muhammad. They envision the promise of a puritanical land and an impending resurrection of the golden age of Islam. That ISIS, in particular, has captured actual territory in Syria and Iraq and governed those areas has lent credence to pretensions of a viable state. 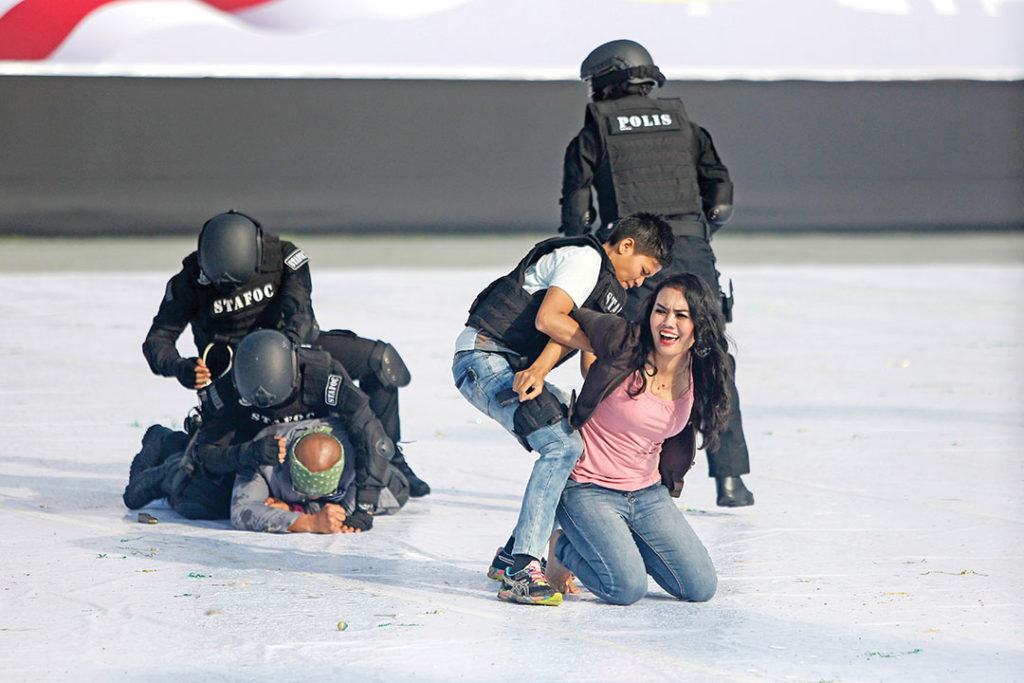 A Malaysian police task force demonstrates how to subdue terrorists during an exercise at the 59th National Day celebrations in Kuala Lumpur. [THE ASSOCIATED PRESS]

As of January 2017, approximately 20 Malaysian militants had died in Syria. This number will no doubt rise with time. What is extraordinary, however, is that there have already been nine Malaysian suicide bombers. Given the deeply ingrained religious and cultural taboos surrounding suicide, willingly seeking out death by suicide marks a consequential breach of those taboos and a psychological leap of faith for these Malaysian Muslims. Part of this willingness has reportedly arisen out of desperation. With reports of discrimination and non-Arab/non-Caucasian fighters being relegated to menial housekeeping tasks, Malaysians there have felt compelled to prove their worth with the ultimate sacrifice. Another explanation is that these individuals genuinely believe in — or, at least, hope — that their actions will count as martyrdom, guaranteeing an afterlife in paradise rather than twin acts of murder and pointless suicide.

Malaysian police consider the threat posed by autonomous actors to be more dangerous than that by ISIS as an organized group. This point is illustrated by several attempts by individuals in 2016 to carry out the mandate of ISIS in Malaysia, including a teenager who used a knife to take a woman hostage in a supermarket. It is unclear, however, just how many of these actors were inspired by ISIS and how many were directly ordered by the group. A video by Katibah Nusantara, the Malay-speaking arm of ISIS, was rereleased in 2016 from a few years prior to agitate for more single-individual attacks, essentially sowing the seeds of chaos.

Like many governments elsewhere, Malaysia has struggled to counter the message of groups like ISIS, in substance and in reach. In May 2015, Deputy Prime Minister Ahmad Zahid Hamidi, who is also Minister of Home Affairs, reported to Parliament that 75 percent of the more than 100 people arrested had been recruited through social media. Many of them were first-time offenders. An overwhelming majority of Malaysian militants in Syria — 95 percent — were recruited through social media. The oath of allegiance — baiah — used to be administered in person, but now it can be done online and remotely through chat applications.

Although Southeast Asia was initially slow to respond to these messages, there have since been a number of promising startup counternarrative efforts, including the touted Regional Digital Counter-Messaging Communication Centre (RDC3) in Malaysia. It’s too early to assess such initiatives, but governments that run countermessaging initiatives are handicapped by a trust deficit with their target audience. Counternarratives, after all, hinge on the credibility of their message and messenger. While governments must be seen to be countering terrorism, there is a strong argument to be made that counternarratives should be focused on operational aspects such as law enforcement as well as the institutional task of governing.

Technology has proven to help radicalization occur faster than before, but terrorists are not created overnight. The online networks that prod an individual into action are almost always cultivated by a complex ecosystem offline that weaves personal experiences with external grievances. Detainee information in Malaysia shows that there is no single profile of a terrorist. Those inspired by ISIS come from different professional, educational and demographic backgrounds. They range in age from 15 to older than 50. They are mechanics, military personnel, religious clerics, senior government officials, pop stars and documentary makers. Some are hardened longtime militants whose commitment extends to the Afghan days. Others are driven by a sense of purpose, adventure, the search for redemption or a combination of all. Many are aggrieved by injustice, whether at home or abroad. Technology merely amplifies these deeper undertones of — often political — dissatisfaction. 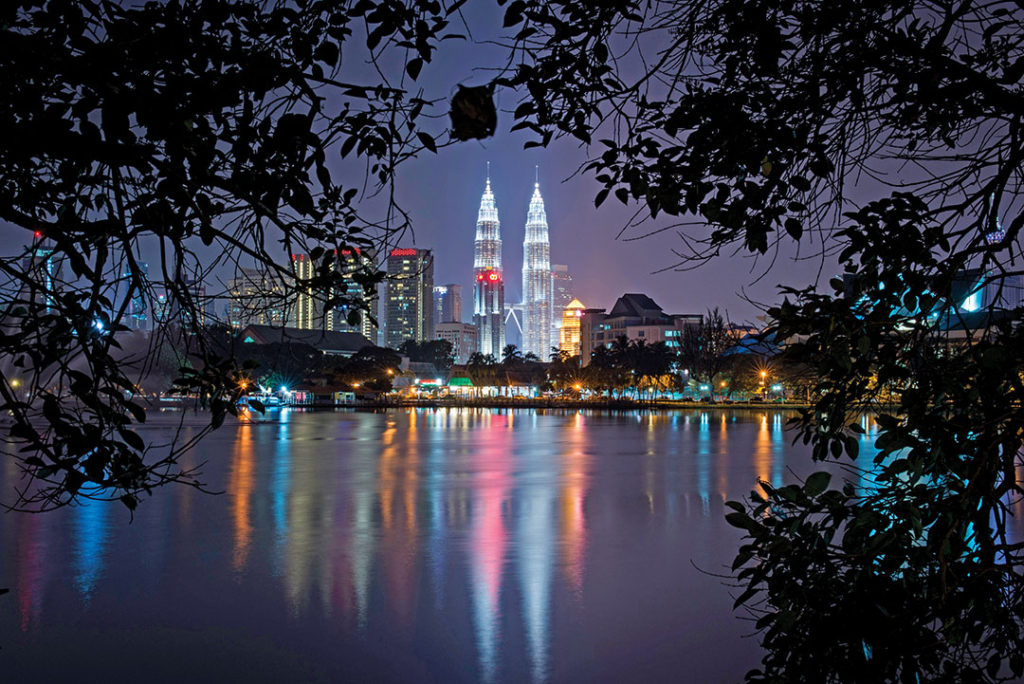 Ahmad Salman Rahim, perhaps Malaysia’s most visible militant online until he went dark and then was killed in Syria in early 2016, was deeply resentful of political developments in the country and of oppression of fellow Muslims in Burma, Palestine and elsewhere. He attempted to travel to 11 countries to redress these injustices firsthand before finally arriving in Syria. Rather than aligning himself with any particular faction in Syria, he saw himself as a freelance mercenary of God.

Malaysia’s experience with terrorist groups shows clearly that, whether cast in terms of ethnonationalism or religion, all these groups have sought to provoke political change through violence. Because the drivers of radicalization, extremism and terrorism are structural and superficial, any effective strategy must recruit a range of stakeholders within government and society at large. Crucially, it must address real and perceived political failings. Very often, counterterrorism strategy is reactive rather than reflective. Like the proverbial disease, it is no doubt easier to manage and treat the symptoms rather than its cause. In recent times, a shift in linguistic emphasis in favor of the term preventing violent extremism suggests a comprehensive and holistic strategy to address root causes. This is the right approach, but the choice of terminology arguably matters less in this case than the actual and effective implementation of that strategy.

Where language does matter, however, is in casting the nature of the beast. As much as its definition continues to be debated, at its core, terrorism is a violent and criminal means of political change. It is this political characteristic that distinguishes it from other criminal offenses. As a crime, it should be prosecuted first and foremost though law enforcement and intelligence measures, not militarily as a war. As a political problem, it requires a widely political solution.

There is no doubt religion has been co-opted into terrorism, but its role is only symptomatic. Unless religion is the cause of terrorism — and it is not — then it should not be made the sole or even primary solution. Re-characterizing the current wave of terrorism as religious — whether by terming it radical Islamic terrorism, referring to ISIS-styled militants as “jihadists,” or unthinkingly attributing the Malay phrase “mati jihad” (loosely translated to mean martyr or literally “death by/in jihad”) to suicide bombers — is problematic on many levels. It is also a sure way to guarantee unending problems and violence in the future. It pushes religion to the front and center of terrorism rather than acknowledging structural weaknesses of governance. The latter obliges governments to confront some uncomfortable truths and perceptions, of which there is understandably little interest to do. Reframing terrorism in religious terms is also a lazy and intellectually dishonest way of asking difficult questions about society: Why do individuals and families choose to upend their lives of comfort to exist in a much harsher environment? Why do youths choose death over life? Is it because they long for themselves and for others what many of us naturally do — an effective and functioning state that administers justice without fear or favor? Is it because in being sold the false advertisement of a utopia, they are failed by a system that discourages critical thinking and intellectual rigor and that instead rewards unquestioning loyalty to any figure of authority, credible or not? Finally, viewing terrorism through a religious lens also leads to policies of division and exclusion.

ISIS arose and metastasized out of a political vacuum just as al-Qaida did before it. These groups have proven to be adept at evolving in the face of existential challenges to their survival. Regardless of the form they take in the future, the key is an effective response and institutional bulwark against their ideology. There is not one approach, given the many different drivers of terrorism in Malaysia, Southeast Asia and the rest of the world. The search for answers requires governments to ask questions that foster an environment where people generate ideas to create change.