Chinese actions in the South China Sea remain under scrutiny

By most analysis other than their own, Chinese posturing in the South China Sea has boosted tensions in the disputed waters to an all-time high — and there’s no sign of the pressures ebbing any time soon.

In fact, commercial satellite imagery that emerged in late June 2015 depicting a 3,000-meter runway constructed by China in one of the Spratly Islands only added to a growing list of flashpoints generating concern among South China Sea claimants and international security experts.

Chinese Foreign Ministry spokeswoman Hua Chunying confirmed that China had completed land-creation projects on some features and reefs in the South China Sea, stopping short of saying where these locations existed.

“The construction is mainly to provide services to meet civilian demands so as to better facilitate China’s efforts at maritime search and rescue, disaster prevention and reduction, maritime research, meteorological observation, environmental protection, safety of navigation, fishery services and so on, in keeping with [our] international responsibilities and obligations,” she said, according to Reuters.

In addition to the construction of an expanded airstrip on Fiery Cross Reef, satellite images captured Chinese military personnel walking around the island, and a naval vessel has moored in the newly constructed deep water port, according to a report by the Center for Strategic and International Studies’ Asia Maritime Transparency Initiative (AMTI). Images of Johnson Reef South show a multilevel military facility erected near the center of the island, with a half dozen security and surveillance towers under construction along with possible weapons towers, AMTI reported. Dramatic changes can also be seen in satellite images for Subi Reef and Mischief Reef, where the southern entrance has been widened, suggesting preparation for a naval base, according to AMTI. 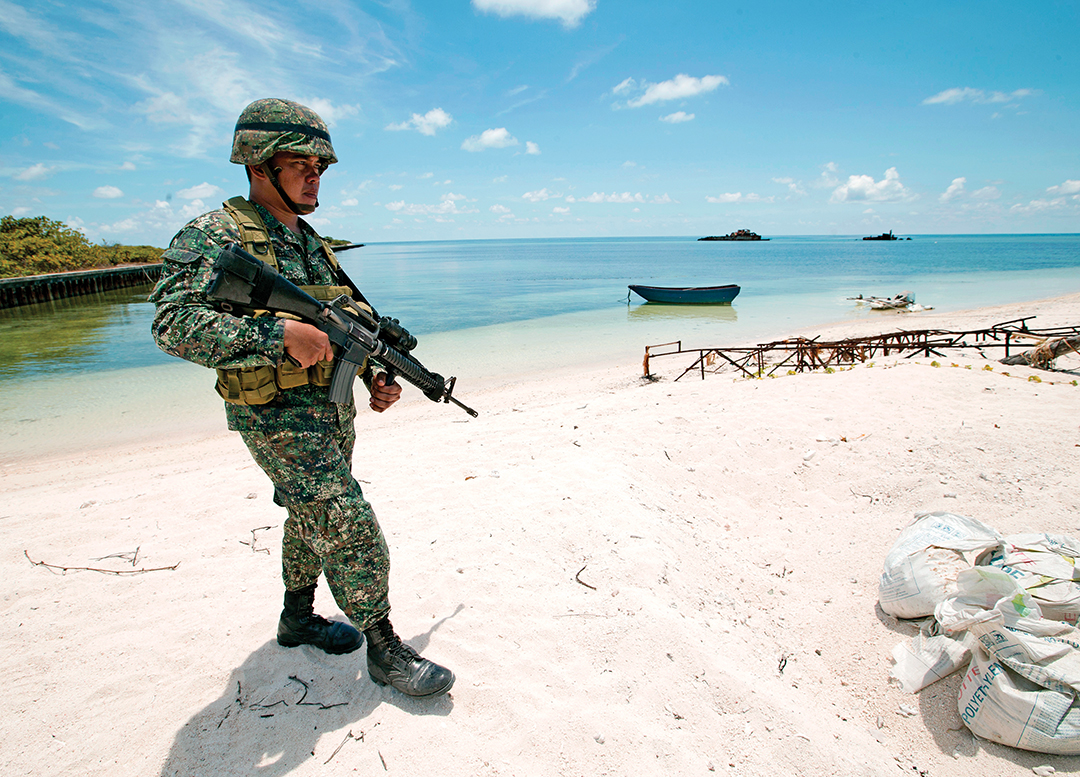 A Filipino Soldier patrols Pag-asa Island in May 2015, of the Spratly Islands in the South China Sea. THE ASSOCIATED PRESS

“China is showing that — as a major power — it can control escalation, that it has the initiative, and that it can do what it sees fit for its interests,” Huang Jing, an expert on Chinese foreign policy at the Lee Kuan Yew School of Public Policy in Singapore, told The Wall Street Journal newspaper in June 2015.

While China generates the most scrutiny by its actions in the South China Sea, it isn’t the only claimant causing a stir. Brunei, Malaysia, the Philippines, Taiwan and Vietnam also have disputes in parts of the sea with China.

Dr. Christopher Yung and Patrick McNulty, former researchers at the National Defense University in Washington, D.C., spent a year examining tactics of all rival claimants in the South China Sea. Their research focused on activities by claimants between 1995 and 2013 that could be found through an open-source Internet search.

Here’s what their research concluded:

In an interview with FORUM, Yung, now an independent political-military analyst, acknowledged that the actual number of activities per country likely far exceeded what he and McNulty captured (though China would still outnumber the others), given the specific parameters of their research. When he shared his findings with the Chinese, they too were surprised at the number, expecting it to be higher. When Yung spoke with the Vietnamese about his findings, they told him they were involved in activities “that wouldn’t necessarily be publicized.” 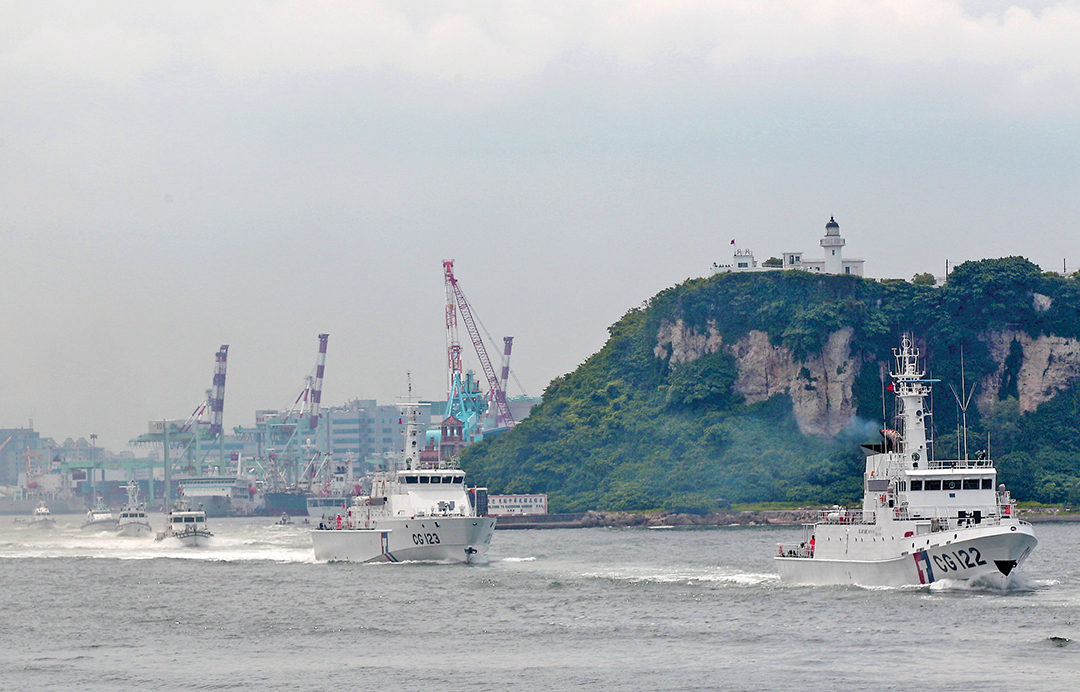 Taiwan Coast Guard patrol ships participate in a drill near the port of Kaohsiung in June 2015. Taiwan’s Coast Guard boosted its defenses amid concerns about China’s growing footprint in the South China Sea. REUTERS

Still, it’s China that dominates headlines and remains the common thread whenever the South China Sea is mentioned.

“From a Chinese perspective, the most transparent and direct explanation of China’s rising assertiveness in the South China Sea is simple: China believes that its past unilateral restraint has done nothing to improve its position regarding South China Sea disputes, and these inactions have in fact resulted in other claimant countries strengthening their presence and claims,” Yun Sun, a senior associate with the East Asia Program at the Stimson Center in Washington, D.C., wrote for the East-West Center in a June 2014 analysis of Chinese calculations in the South China Sea. “Therefore, for China to improve its position in the current climate or for future negotiations, it must first change the status quo through all available means necessary.”

Chinese policy allowing for a more assertive maritime posturing has existed for several years, according to Yun. President Xi Jinping has acted recently on those powers because he needs a strong foreign policy posture to boost his domestic power base, she said.

“Xi needs as much foreign policy credits as possible to build his strong-man image and defuse internal criticisms of his various domestic agendas,” which have included deepening economic ties and a strong anti-corruption campaign, Yun wrote. “This does not necessarily suggest or prove that Xi personally does not endorse an assertive foreign policy, but it does add an additional layer of strong motivation to it.” 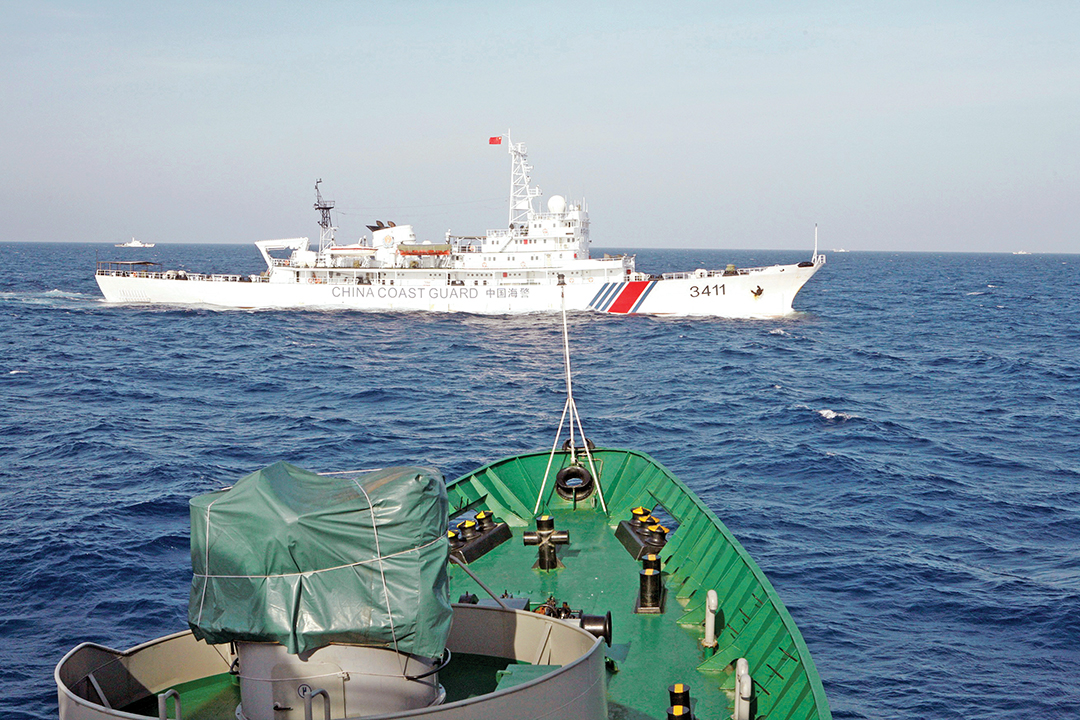 A Chinese coast guard ship cruises near a Vietnam Coast Guard ship in May 2014 in the South China Sea, about 210 kilometers off Vietnam’s shore. REUTERS

China remains selective about its targets, Yung told FORUM. It engages more publicly in disputes with countries like the Philippines and Vietnam, as opposed to smaller countries such as Brunei, because China “doesn’t want to portray itself as an overly aggressive hostile state,” Yung said. “That’s part of China’s strategy.”

“China is behaving assertively in the South China Sea because it believes it can,” Yun wrote. “This assessment is not only based on China’s growing military capacity, which dwarfs the capabilities of perhaps all other Southeast Asian claimant countries combined, but also on a strong conviction in China that the United States will not use its hard power to counter Chinese actions.”

In June 2015, U.S. Deputy Secretary of State Antony Blinken said the United States takes no position on competing claims but has a strong interest in how they are resolved and in ensuring that freedom of navigation remains, according to Reuters.

“The way forward is for China, and all claimants, to freeze their reclamation activities and resolve their difference in accordance [with] the rule of law,” Blinken said in comments in which he compared China’s actions in the South China Sea to those of Russia in eastern Ukraine. “In both eastern Ukraine and the South China Sea, we’re witnessing efforts to unilaterally and coercively change the status quo — transgressions that the United States and our allies stand united against.”