It was a warm spring day in March 2015 when a caravan of 26 vehicles unloaded members of 62 families at the Kajhuri check post in Mir Ali, North Waziristan, Pakistan. They were greeted by Maj. Gen. Jamil Akhtar Rao and other officers of the Pakistan Army. As a gentle breeze swayed the surrounding palm trees, the group of travelers assembled in a clearing to await processing. One man began to beat a traditional duff drum while several others broke into a version of the Bhangra folk dance. After a year or more of displacement, the group of men, women and children had returned to their home territory, and they were celebrating.

This homecoming to the war-torn Federally Administered Tribal Areas (FATA) of Pakistan was made possible by coordinated efforts on the part of the Pakistan Army, Disaster Management Authorities (DMAs), various United Nations agencies including the Office of the High Commissioner for Refugees (UNHCR), and a number of nongovernmental organizations. It marked the beginning of a steady and increasing flow of returning internally displaced people (IDPs), recently estimated at 38 percent of those originally displaced.

“With unflinching resolve and courage, our proud tribesmen of FATA and people of Khyber Pakhtunkhwa stood up to atrocities of the terrorists, pushed them back and marginalized them in the society,” said Pakistan’s Chief of Army Staff Gen. Raheel Sharif as he addressed the topic of returning displaced people at a February 2016 meeting in Peshawar. “We are in the most difficult phase of the operation, physically rebuilding the war-damaged areas, resettling of IDPs and eventually establishing an administrative system that focuses on the needs and aspirations of the people.”

Military operations against terrorists launched in 2009 and 2014 in the FATA districts of North and South Waziristan and an earlier operation in Pakistan’s province of Balochistan led to the displacement of up to 2 million Pakistani citizens from about 300,000 families. Many of these people were sheltered in camps, while many more stayed with relatives and friends, typically in cities.

An estimated 75 percent of the displaced population are women and children, according to the FATA Disaster Management Authority, and about 21 percent of the households returning so far are headed by women.

The camps for displaced people are largely run by Pakistani civilian agencies and located in FATA and the neighboring province of Khyber Pakhtunkhwa, where they are managed by the local Provincial Disaster Management Authority. Relief supplies and money have come from a number of sources, including the U.N. World Food Programme, the Pakistan Army, civilian contributions, and donor countries such as Canada, Denmark, Germany, Japan, Luxembourg, Norway, Sweden, Switzerland, the United Arab Emirates and the United States.

Most displaced people, however, have opted to stay with host communities, rather than in camps, which has affected the government response to their displacement. The extended displacement has had an impact as well. Families displaced by the 2014 military operation were expected to return home in three to four months — a period extended to nearly two years.

The Pakistan Army has played a central role in helping the displaced people, from dispensing relief supplies at the time of displacement to providing security clearances to NGO relief agencies and helping people return to their areas of origin. When displaced families relocated from North Waziristan at the onset of the Operation Zarb-e-Azb counterterrorism effort in June 2014, the Army was there to meet them and distribute relief provisions in the settlements of Bannu, Dera Ismail Khan and Tank, according to the Inter Services Public Relations office of Pakistan’s Armed Forces.

In addition, the Army collected relief supplies at donation points across the country, treated thousands of displaced people at its Khalifa Gul Nawaz hospital in Bannu, and arranged for veterinary treatment for displaced families’ livestock. More recently, the Army has been working with the regional disaster management authority to facilitate each round of returning displaced people, guiding convoys through checkpoints to reach their home territories.

In responding to the needs of displaced Pakistanis, the UNHCR has taken the cluster approach that it first applied in Pakistan after a 2005 earthquake. This approach pools the resources of U.N. and non-U.N. organizations to address peoples’ needs in times of disaster.

In areas such as South Waziristan, Bara in Khyber Agency and North Waziristan, UNHCR supported the return of 750,000 displaced people in 2015 and early 2016. It took the lead managing camps and shelters and providing nonfood items to hundreds of thousands of people.

Bringing nongovernmental organizations (NGOs) on board the various clusters in times of need has presented its own challenges, as has been widely reported in Pakistan’s media. The need for security and legitimacy clearance is cited as the reason for restricting NGOs from operating in Pakistan until they obtain a permit from local government and the Army.

The U.N.’s Office for the Coordination of Humanitarian Affairs (UNOCHA) reported in October 2015 that delays in receiving such permits had complicated a number of projects supported by the U.N.’s Pakistan Humanitarian Pooled Fund, citing an average waiting time of 26 days. However, the same report stated that 23 projects were implemented in the areas hosting displaced people, facilitated by cluster NGOs that had received permits.

Among the approved NGOs are the United Arab Emirates-based Hayat Foundation, the Centre of Excellence for Rural Development and the National Rural Support Program. Among other services, NGOs are educating residents about the risk of land mines through discussions, leaflets and brochures. 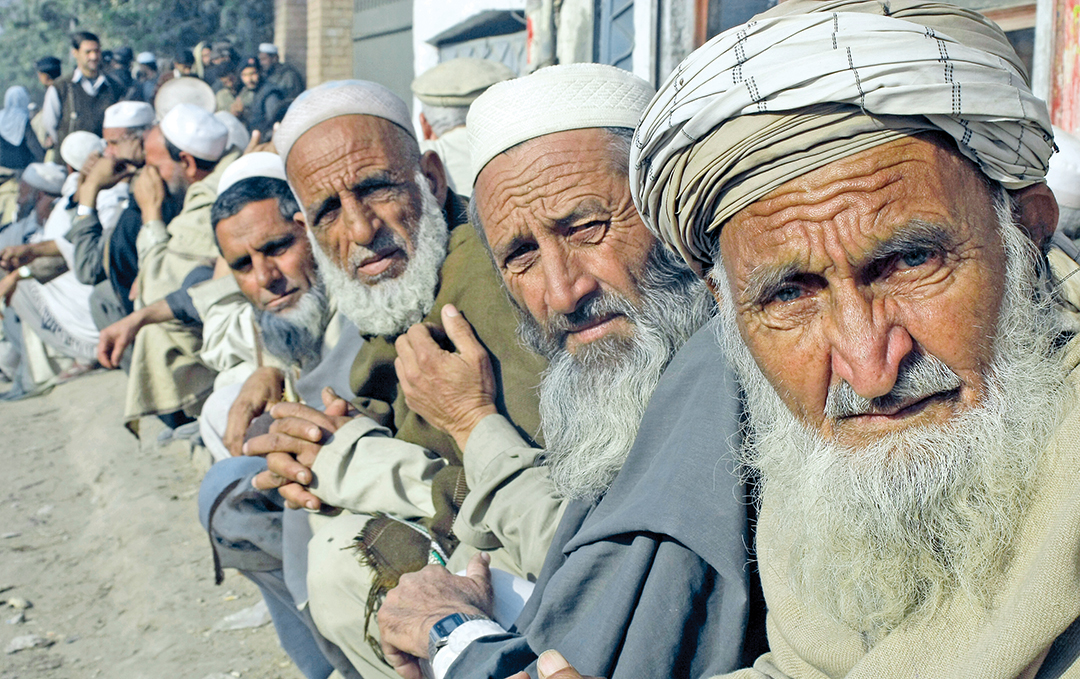 Internally displaced Pakistanis wait for relief goods from the United Nations at a distribution center in Peshawar, Pakistan, in December 2014.

The government and relief agencies used TV and radio broadcasts, as well as camp visits, to publicize the rounds of returns and to disseminate important information to prospective returnees. UNOCHA reported success in the summer of 2015 with a program of dispensing cash grants to returnees to ease their resettlement. It cited the example of Khan Auro, a mother of 11, who was able to rebuild her home in Khyber Agency and buy provisions with a $250 grant delivered to her as a prepaid ATM card.

“We traveled to Peshawar to withdraw the funds,” said Auro, acknowledging the lack of an ATM near her home, “and to use the card at authorized EasyPaisa shops. I received the money in three installments.”

Families whose homes were destroyed have been eligible to receive additional grants and temporary shelters.

Nagging issues continue to plague displaced families, such as the lack of convenient and affordable access to health care and questions concerning the sustainable livelihoods of the returnees. However, the commitment for displaced people to return home remains strong.

“There are signs of improvement. Things are getting better,” said Shahid Ehsan, program manager at the Pakistan-based Society for Human Rights and Prisoners’ Aid. “More and more people are returning to their places of origin because the majority of the area is becoming clear.” The recent return-intention survey indicated that the majority of people displaced do want to return immediately, and a very insignificant number would prefer to return in a month’s time because of ongoing commitments in the host areas.”

So far, the Pakistan Army, and in particular Gen. Sharif, have received strong popular support for clearing territories of terrorists and helping displaced people return. How long the cleared areas of FATA and Khyber will remain free from terrorism is itself a topic of debate among experts.

“Whether the nonstate actors who fled into Afghanistan during the FATA military operations come back or not,” said Rebecca Zimmerman, associate policy analyst at the Rand Corp., “part of that depends on how well Pakistan does at keeping Taliban actors at the negotiating table.”

Zimmerman added that conditions on the Afghan side of the border with Waziristan could also play a role — namely the strength and success of Afghanistan’s government and military. She acknowledged that it was a breakdown in negotiations between the Pakistani government and the nonstate actors that led to the military operation in 2014. She indicated that a lasting solution will probably need to take the form of a “cross-border effort,” involving the four participants in the February 2016 Quadrilateral Talks — Afghanistan, China, Pakistan and the United States.

“If the major regional powers aren’t able to work together on the issues,” said Zimmerman, “this will likely impact the refugee phenomenon.”

For the time being, these sections of northern Pakistan are relatively peaceful, and displaced families continue to return to their home territories. The government of Pakistan and its partners vow to rebuild infrastructure to ensure that resettlement is both durable and successful.  o