The Philippines is an archipelago of 7,107 islands. The waters that surround the islands of the Philippines, however, are often overlooked. We have one of the world’s longest coastlines at 36,289 kilometers, almost twice as long as that of the United States. Moreover, more than 60 percent of our country’s population live in coastal areas, with 64 out of 79 provinces being coastal provinces and with 25 major cities located along the coast.

Aside from having a long coastline, our country also has a vast maritime zone and porous maritime borders. The territorial waters, together with the exclusive economic zone (EEZ), already make up 2.2 million square kilometers. Our country also sits astride major oil tanker routes and commercial shipping lanes. The airspace above our country’s vast maritime domain also serves as a passageway for local and international civil aviation.

We have been focusing on the development of the marine environment because it is important from the standpoint of territorial integrity, national security, national patrimony, the economy and the environment. The unity of land and water is integral in the Philippines’ notion of national territory.

Being a staunch advocate of the concept of archipelagic doctrine, the Philippines was among the five archipelagic sovereign states recognized by the United Nations Convention on the Law of the Sea (UNCLOS) in Jamaica in 1982.

The maritime domain presents an abundance of natural resources. Most of our country’s oil and gas deposits are offshore, and a wealth of seabed minerals that remain largely untapped also lies in our country’s vast maritime zone.

Our country’s rich fishing grounds make it one of the world’s top fishing nations. In 2010, our country was the world’s third largest producer of aquatic plants (including seaweeds) and the world’s fifth in fisheries production. The fishing industry generates P183.1 billion (U.S. $3.9 billion) for current prices and P130.77 billion (U.S. $2.79 billion) for constant prices. It employs 1.6 million fishing operators, of which 1.37 million are municipal fishers. Our country’s top fisheries exports include tuna, seaweeds and prawn/shrimp.

The marine environment is part of our country’s unique and fragile ecosystem. The Philippines falls within the Coral Triangle, the center of world marine biodiversity. Our country’s teeming marine life includes commercially exploited species, as well as endangered and endemic ones found nowhere else in the world. Sustainable management and environmental conservation will help ensure the enjoyment of these resources by future Filipino generations.

Furthermore, the Philippine Department of Energy estimated that the offshore energy resources in the West Philippine Sea alone can meet our country’s energy demand for the next 20 years. One major potential area, Recto Bank, is thought to contain an estimated 8.799 trillion cubic feet of natural gas, according to a 2012 report in the Business Mirror newspaper. At present, Malampaya, our country’s first petroleum production facility, remits U.S. $1 billion per year at current gas prices to the national coffers and at the same time saves our country U.S. $500 million worth of annual foregone energy imports.

Securing these areas — oil and gas rigs, underwater pipelines and related infrastructure — is crucial for our country’s energy security.

Along with the rich resources and vast opportunities intrinsic to the Philippines as a maritime nation, there are challenges and risks that must be appropriately managed. For one, our country’s porous maritime borders pose serious security risks from foreign intrusion, maritime piracy and transnational crimes. Also, natural calamities are abundant in our county. This is seen in the numerous typhoons that form in the Pacific Ocean and the regular eruption of under-the-sea volcanoes that expose coastal areas to the danger of tsunamis, among other dangers. Further, man-made calamities aggravate the already teeming threats.

Beyond the regular occurrence of accidents at sea such as collisions or sinking, our country is along the route of oil tanker traffic and faces the hazards of maritime oil spills. The vast expanse of maritime zones of our country against the context of scarce maritime law enforcement assets also exposes our country to the threat of illegal, unregulated and unreported fishing.

All these highlight the importance of the maritime domain for our country. In response to this need for an integrated and harmonized management of a host of maritime issues, the Philippines established the National Coast Watch System (NCWS) in 2011. According to the executive order creating it, the system serves as the “central interagency mechanism for a coordinated and coherent approach on maritime issues and maritime security operations toward enhancing governance in our country’s maritime domain.”

Prior to the establishment of NCWS, interagency structures addressed maritime issues. The Cabinet Committee on the Treaty of the Law of the Sea in 1981 coordinated our country’s implementation of UNCLOS.

In 1988, the committee was reconstituted and expanded to include agencies that would study harmonizing domestic laws with UNCLOS. In 1994, it was replaced by the Cabinet Committee on Maritime and Ocean Affairs (CABCOM-MOA) with the power to formulate policies and address concerns about UNCLOS implementation and related maritime matters.

CABCOM-MOA was strengthened in 1999, further expanding its membership and functions. This included the formulation and recommendation of a national maritime policy to the president, coordinating its implementation, and periodically evaluating and refining the same.

In 2001, CABCOM-MOA was abolished and its functions were exercised by an interagency committee with the Department of Foreign Affairs (DFA) as the lead agency through the Maritime and Ocean Affairs Center. In 2007, this body was reorganized into the Commission on Maritime and Ocean Affairs (CMOA) which exercised overall jurisdiction and direction over policy formulation, implementation and coordination with other departments and experts, both foreign as well as local, on maritime issues. The foreign affairs department has historically played an important role in most of these past interagency bodies, either as secretariat or lead agency. However, it was recognized that there was a need to expand maritime interagency collaboration and cooperation among the different government agencies and offices beyond the diplomatic aspect.

In 2011, NCWS adopted the functions of CMOA. Moreover, the success of the Armed Forces of the Philippines-initiated Coast Watch South (CWS) project encouraged its replication on a national scale, paving the way for NCWS. CWS was established to enhance maritime security in the southern Philippines. It was conceptualized to further develop and operationalize coast watching in the Philippines through an interagency and whole-of-government approach, with the active involvement of the private sector. CWS was instrumental in the tracking and monitoring of large numbers of local and international cargo vessels carrying dangerous cargoes while transiting the waters of Western Mindanao, vessels in distress and other vessels that could be potential violators of maritime laws. 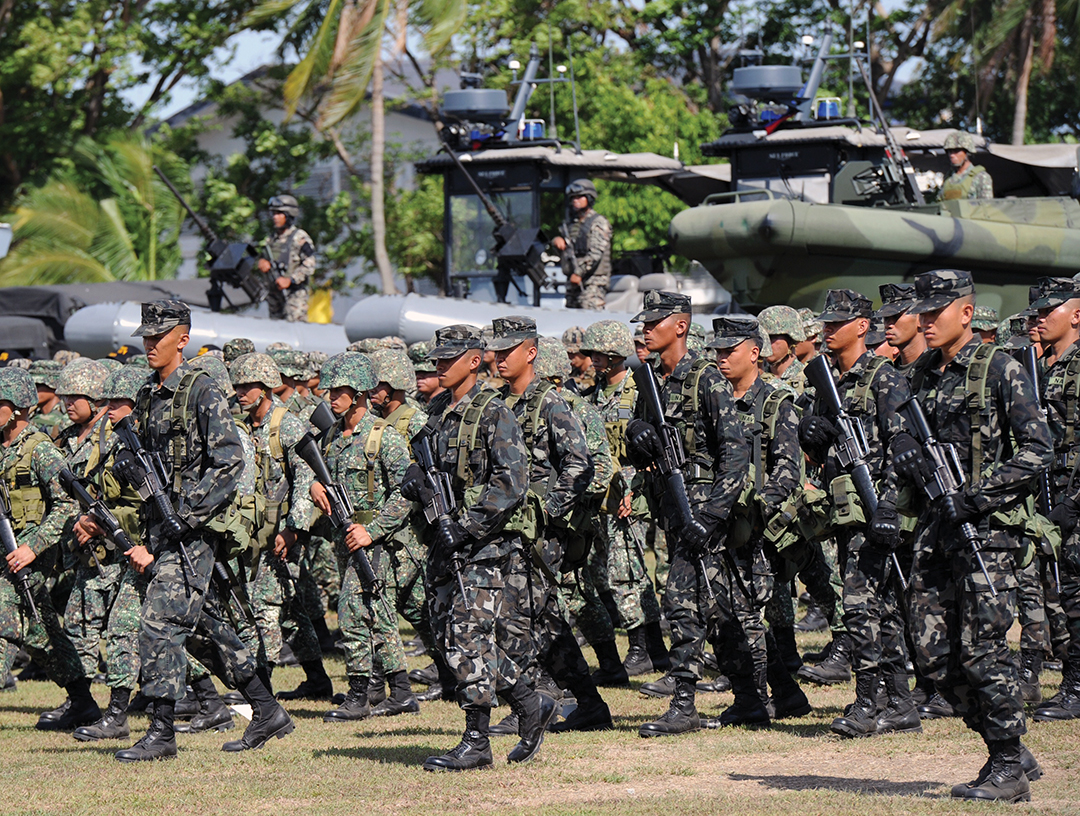 Philippine Marines march next to rigid-hulled inflatable patrol boats during a Navy anniversary celebration in Cavite City in May 2015.

The vision of the NCWS is for our country to be a leading global maritime nation whose maritime resources are properly managed and protected. It is a state in which national, regional, local, private sector and international partners can embrace and achieve the common objective of collaborating and enjoying the richness of the maritime and marine resources for economic prosperity under the rule of law.

The projects of NCWS are geared to promote synergy and collaboration among agencies, which can help optimize the use of existing resources and capabilities for maritime law enforcement operations. At present, various agencies gather different types of information from the maritime domain with limited or no information-sharing linkages. The NCWS will establish and institutionalize information-sharing mechanisms, enabling decision-makers to monitor situations to make informed decisions.

The NCWC chairman is the executive secretary and its members include the secretaries of the following departments of the Philippines: Transportation and Communications, National Defense, Foreign Affairs, Interior and Local Government, Justice, Energy, Finance, Environment and Natural Resources, and Agriculture.

The support agencies are to provide manpower, equipment and material support to the center and its operations. Philippines law instructs all other government agencies to actively coordinate and cooperate with the council to support maritime security operations. Furthermore, the creation of NCWS will not diminish the mandates, functions and responsibilities of the support agencies.

Critical to achieving maritime domain awareness are capabilities that allow relevant information from different sources to be aptly harnessed to make informed decisions and responses to better protect our country’s maritime domain. Leveraging our partnership with the United States provided the needed capabilities to jumpstart the NCWS, we addressed shared maritime interests through the Weapons of Mass Destruction-Proliferation Prevention Program (WMD-PPP) under the Defense Threat Reduction Agency, in accordance with the United Nations Security Council Resolution 1540 of 2004, on effective responses to global threats of proliferation and terrorism and the need to combat these dangers in pursuit of international peace and security.

Likewise, Australia’s contributions through the Royal Australian Navy, Border Protection Command and Customs Service to the development of the Armed Forces of the Philippines’ CWS Program were instrumental in formulating critical systems and procedures for a 24/7 interagency information-sharing center, which the NCWC is intended to be. 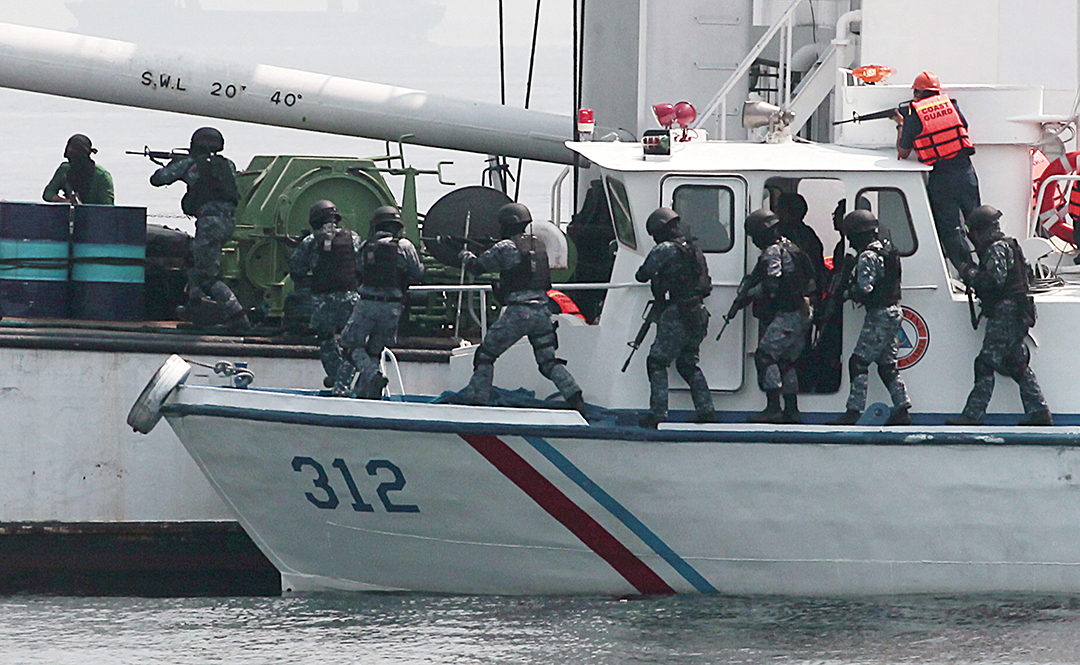 Philippine Coast Guard personnel board a ship during a seajacking scenario as part of the combined Philippine-Japan maritime exercise off Manila Bay in the South China Sea in May 2015.

OUTCOMES AND THE WAY AHEAD

The completion and inauguration of the NCWC in April 2015 is an important milestone, especially in highlighting the collaborative and cooperative nature under which the system was created.

Relevant protocols in information sharing, uniform maritime action and capability development between and among the different NCWS member and support agencies were already developed to complement the concept of operations for the NCWC. Focused and sustained capacity building programs, especially for personnel staffing the center, are being undertaken to further improve skills and procedures for interagency coordination, information sharing and cooperation.

Initial successes in interagency information sharing led to positive interagency response operations, specifically in one of the country’s leading free ports in Luzon and another international port in Mindanao. This underscored the relevance of seamless interagency cooperation and coordination. The rate at which information is processed and received is critical at times for planning and executing shared awareness strategies. Complex interagency responses require a healthy mix of technological capability as well as good working rapport among different law enforcement agencies.

More capabilities are earmarked under Increment
II of the WMD-PPP.

These are aimed to further integrate existing surveillance systems from other maritime agencies to the center as well as to improve communications, surveillance and response during interagency maritime law enforcement operations.

Given that the character of a nation’s maritime sector can be seen as a microcosm of that nation, it is imperative that officials take action in improving governance. These efforts are not without their own complexities, hurdles and challenges, but the consequences of inaction far outweigh whatever risks will be faced by our country in pushing forward.

The NCWS is a fresh construct for maritime governance. The efforts of the system may be construed as initial steps in the quest to realize the Philippines’ vision of being a global leading maritime nation, but these are nevertheless a big leap in our country’s whole-of-government approach in improving governance in the maritime domain.