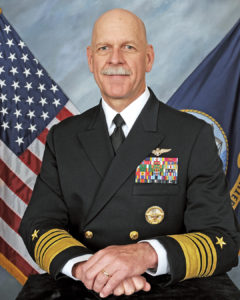 U.S. Pacific Fleet Commander Adm. Scott H. Swift spoke with FORUM during the Indian Ocean Naval Symposium (IONS), hosted in Dhaka by the Bangladesh Navy, in January 2016. He shared his thoughts on how settings such as IONS help navies connect to understand their common challenges, collaborate to create a solution, then work to conquer maritime challenges together. Swift also talked about force modernization across the Indo-Asia-Pacific and what Pacific Fleet (PACFLT) is doing to assist its allies, as well the challenges navies face in sustaining a ready force during an era of downsizing and budget constraints.

FORUM: How do forums like this serve to facilitate resolution on flashpoints around the region, particularly ones like the South China Sea?

SWIFT: It’s so easy to judge because it’s so hard to understand. The reason that we judge is because to understand, there’s a necessity to invest in time in a relationship. This is my fourth visit to Bangladesh. I was struck by the number of young officers who came up to me and had some remembrance, recollection of my previous visits. Forums like this take what is a specific example in any given country and expand it beyond just the region. Spain was here, the U.K. was here, Germany was here, in addition to South Africa, Middle East nations, Asian nations, Pacific nations. It was a detailed, in-depth discussion about the challenges that the Indian Ocean region faces. What struck me is the commonality of those challenges that expand both to the east of the Indian Ocean region and to the west of the Indian Ocean region. Several mentioned the stability of the Indian Ocean, which I think has been attributed largely to forums such as IONS and a concern to not let the instability that exists in both the East and to the West creep into the Indian Ocean. I wouldn’t say that this is a common view, but it’s not an uncommon view. It comes up often.

Having an inclusive forum like this brings individuals together with different experiences. The European experience — what they’re going through right now — is very different than the Pacific experience in the context of the details. But broadly and strategically, the similarities are really quite amazing. It’s those similarities that bring those ideas into an IONS-type forum so that you can be more predictive and be more focused on what may be occurring in the near term. Take those best practices in so you’re better prepared first to prevent that type of instability from occurring, but if it does occur, to restabilize the situation.

FORUM: What is PACFLT currently doing to address maritime security?

SWIFT: Participating in forums like this. Encouraging forums like this. I think it’s instructive when you look at IONS — 35 nations represented here. The level that IONS has raised itself to has brought it into much closer parity with other forums such as WPNS [Western Pacific Naval Symposium]. You’ve got the Shangri-La Dialogue, you’ve got the Australian Sea Power Symposium. You’ve got multiple forums that look at similar issues but in different geographic contexts. Pacific Fleet participating in those forums, as well as in IONS, helps increase those insights with allies, partners and friends. The actionable pieces are exercises like CARAT [Cooperation Afloat Readiness and Training], SEACAT [Southeast Asia Cooperation and Training], Malabar, the RIMPAC [Rim of the Pacific] exercise. I think [these] are all indications of the growing view of working together in a consensus way is the best way forward to resolve differences. I mentioned, often, while we have much more in common and in collaboration in the region, there are areas where we have competition. And it’s those areas of competition that we spend most of our time focusing. The forums that I’ve mentioned, the exercises that I’ve mentioned, enable you to focus on those areas of competition and make sure you get that deeper understanding so we don’t become unhealthy friendships. It’s the idea that you can criticize an idea without criticizing an individual. Have a dialogue about what is the intent. Break through some of that uncertainty that comes from a lack of transparency, a lack of clarity of what the intent is. 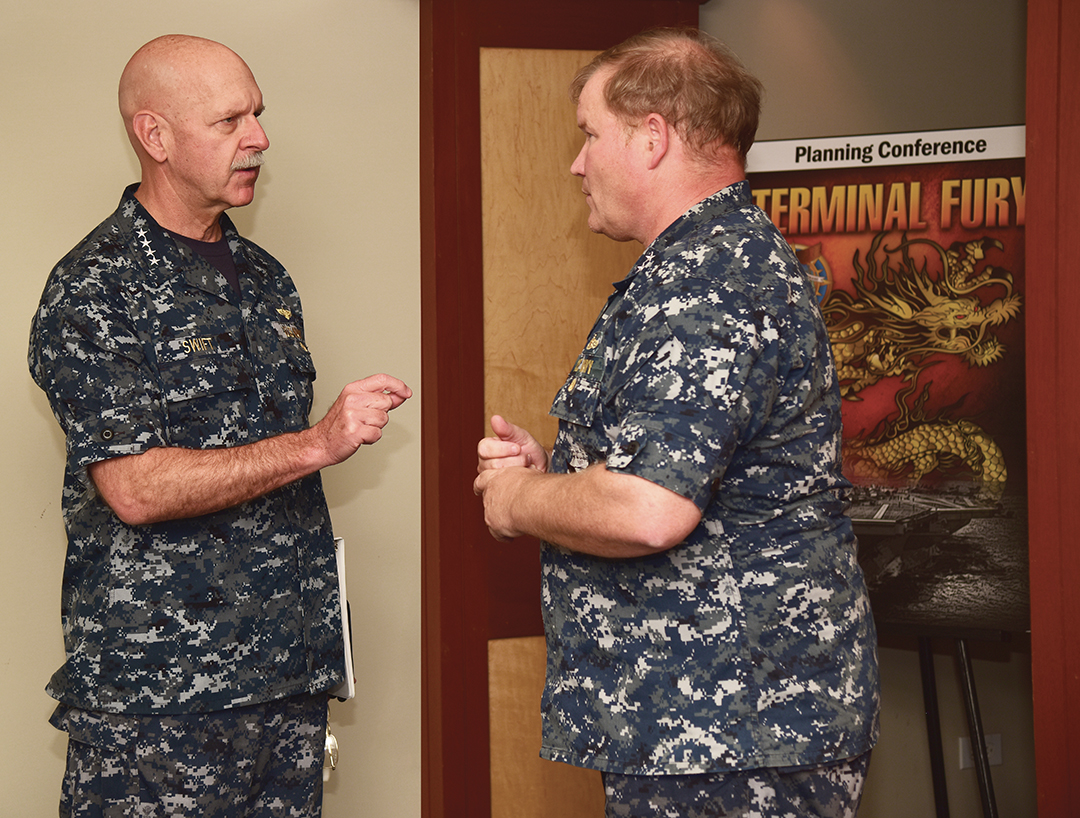 FORUM: Modernization of forces seems to be a theme of several countries around the Indo-Asia-Pacific region. What is the U.S. doing to assist in those efforts?

SWIFT: There’s multiple venues of assistance. We provide technical assistance. I’ll give an example right here in Bangladesh. We just transferred the ex-U.S. Coast Guard Cutter Rush to the Bangladesh Navy — the second one, I think, that they’ve received. They’re interested in a third one. That they’re interested in a third one is reflective of the value of that program. We’ve done the same for other countries in the Pacific region. The Philippines have profited from that as well. There was a challenge with the engineering system that’s in that ship. That’s one that Bangladesh may not be familiar with, that’s not been a part of their inventory. Instead of that being a challenge, we turned it into an opportunity. We brought a gas turbine technician from the U.S. Navy to Bangladesh to work with them to understand how best to maintain and sustain that gas turbine system. In fact, the young commander that’s in charge of that system was the commander of one of the Bangladesh ships that I had visited. He was now quite proud that he was responsible for the incorporation of the ex-U.S. Coast Guard Cutter Rush into the Bangladesh Navy. I was aware of what we had done to assist them with a deeper understanding of the gas turbine system. He called it out, saying that was another example of our strengthening relationship. Those are just a couple of examples. We have a series of exercises, and we always seek the insights and concerns of whatever country we’re teaming with. In this case, Bangladesh. Where do they think that they need the most help? We’re happy to focus our exercises into those areas, so there’s a tangible advancement in their capability and capacity and the ability to sustain their own force. 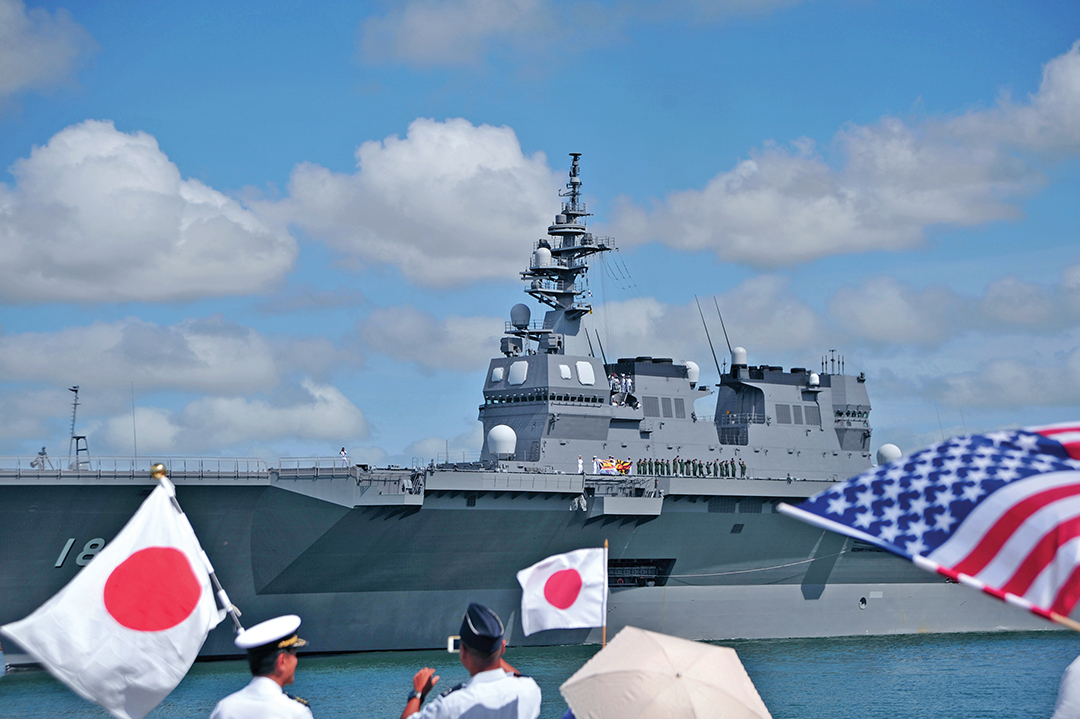 Japan Maritime Self-Defense Force destroyer Japanese Ship Hyuga departs from Joint Base Pearl Harbor-Hickam after the conclusion of Rim of the Pacific 2016.

FORUM: How does the Navy balance maintaining a ready force in an era of downsizing?

SWIFT: I think it’s a great question. It was brought up by several speakers in the IONS forums. Several have approached me and asked me about it. My response is, I’ve been in the Navy for over 35 years now, and it’s been the same all the way through. You’re never going to have enough resources as a Navy to cover down on all the challenges. The growth in maritime shipping. The emergence of piracy that occurred in 2006 when I was the deputy commander at NAVCENT [Naval Forces, U.S. Central Command]. We never anticipated that occurring, and it took awhile to come together and determine the best way forward. I think we’re in a place now because of those common efforts, where we have turned the corner on piracy and the destabilizing action that occurs. And look who it’s brought together to participate in that — Iran and China — two countries you wouldn’t think would come together in a collaborative way. They tend to work in a unilateral structure. We at least collaborate to deconflict our activities so we’re not patrolling in exactly the same areas. We look broadly across the region to find those areas where there’s tension and frictions, and how do we turn those areas of challenges into areas of opportunities?

We’ve got great capability to come together on counter-piracy, but as was mentioned before, it expands the effectiveness of the force if we can team with others. You’ve always got that balance. The challenge of how much do you spend on modernization, and how much do you spend on expanding the fleet. That continues to be a balancing act for any naval forces. I don’t think the period now is any different than it was five years ago or 10 years ago. I think the level of angst and the focus are the same as five years ago and 10 years from now. That’s not to diminish the challenge. The challenge is real. And I’m confident we’ll be able to work through it.

FORUM: Talk about the U.S. role in security around the Arctic and Antarctic as the competition for resources in those regions increases.

SWIFT: The Navy has recognized there’s an important leadership role for the United States Navy to play in both the Antarctic and Arctic region. If you look at the challenges that we have with receding ice caps, they are certainly more accessible. The northern shipping lanes are open for much longer. Some assistance is required, but you can make the argument that they are really open year-round with the support of icebreakers to keep them open. The ice caps have receded and exposed continental shelf to exploitation. And that has increased an interest in Antarctica and the Arctic region. From that competition for resources comes much the same dialogue that you see in other areas such as the Indian Ocean and Mediterranean and elsewhere. How do you reconcile national interest in what is international space — new space — that before was covered by the ice floes? There’s a strong Coast Guard leadership role to play there. The United States Navy and United States Coast Guard are working together to focus on both the new opportunities that are presented there as well as the new challenges.  o