Bringing Stability to the Cross-Strait Relationship

The possibility of military conflict with mainland China has loomed over Taiwan since 1949 after the declaration of the People’s Republic of China on the mainland. China has long maintained the objective of eventual unification with Taiwan. China’s decadeslong military buildup and saber-rattling opposition to Taiwan’s past moves toward official independence suggest that the Chinese are prepared to achieve unification by military force.

A host of considerations, however, including the modern, formidable and survivable defense force of Taiwan, have so far deterred a military move by China in what remains one of the world’s most delicate and complex relationships between nations.

“China wants to unify, Taiwan wants to maintain autonomy,” Dr. Douglas Paal, vice president for studies at the Carnegie Endowment for International Peace, said in a phone interview with FORUM. “It’s been that way for a long time. Within Taiwan, the debate is between maintaining the autonomy that Taiwan has today or taking it a step further and becoming a legally independent sovereign state with a different name from China. And China has frequently threatened to take action of an unspecified nature — but presumably military — to stop that from happening.”

Prior to his appointment at Carnegie, from 2002 to 2006, Paal was head of the American Institute in Taiwan, which replaced the U.S. Embassy in 1979 after the U.S. normalized diplomatic ties with China. 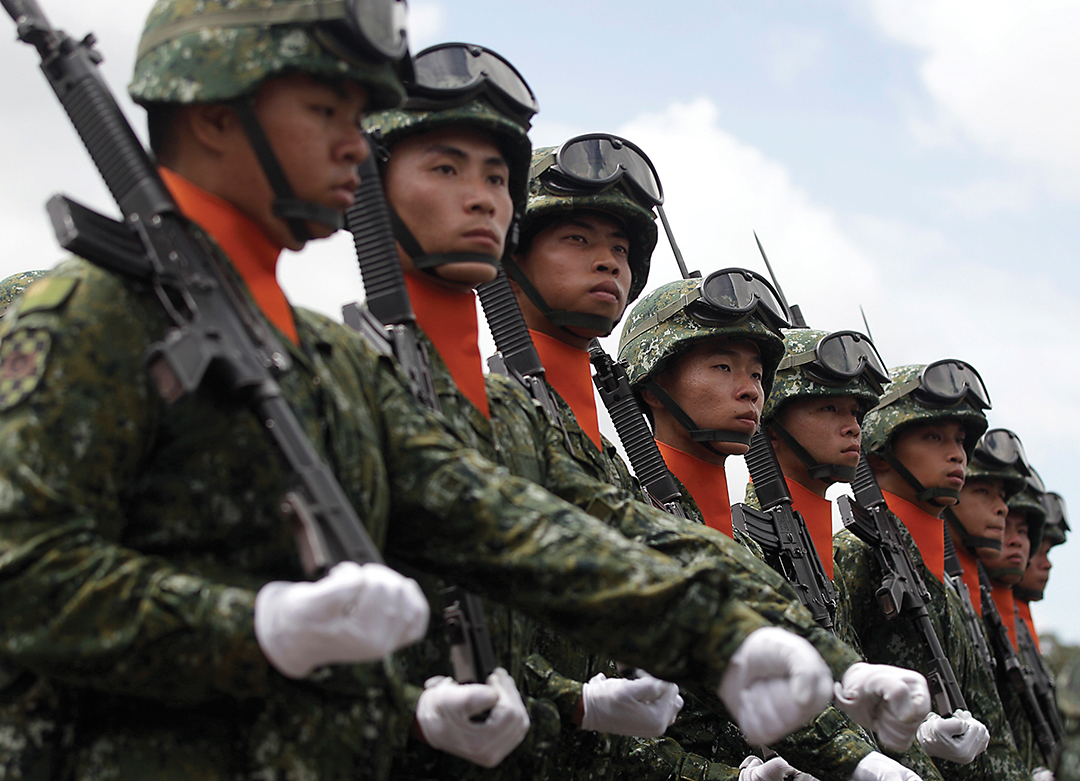 Graduates of Taiwan’s military academy march during the joint commencement for the Air Force and Navy academies in Kaohsiung in southern Taiwan in June 2014. [reuters]

“Fighting wars is not a simple bean-counting game,” said Dr. Ching Chang, a research fellow at the Society for Strategic Studies in Taiwan. “The one with more forces or hardware might not necessarily prevail all the time. Given the case of U.S. vs. Vietnam or Soviet invasion to Afghanistan, mass is a favorable leverage but never a victory guarantee. Neither does the quality of weapons always have the chance to offset the leverage of quantity.”

In the case of Taiwan, however, the quality of their force is a recognized advantage. “The primary advantage that Taiwan has is the relative modernity of its force,” said Mark Cozad, senior defense research analyst at Rand Corp. Whether the analysis compares the state of the art of its tactical and strategic defense systems or its advanced fighters, its modernity has “traditionally been Taiwan’s advantage, particularly when faced with an air threat from China.”

Cozad acknowledged that in terms of sheer size and firepower of forces, Taiwan would be considerably outgunned by China if a full-blown military conflict erupted across the Taiwan Strait. But he added that the cost of defeating Taiwan in such a conflict, with the aim of unification, is likely too high for China to attempt it — at least in the foreseeable future.

“If I’m looking at how threats from China might be offset, the biggest thing to consider is survivability,” said Cozad. An adequate level of survivability of Taiwan’s force, he explained, rather than an ability to actually defeat China in the theater of combat, could be sufficient to deter China from deploying a military solution to the political problem of unification.

As keys to survivability, Cozad listed mobile air defense systems, underground facilities, obscurants, lines of decoys — both physical and electronic — and other devices. He also called out strategy and tactics that “make it hard for the enemy to know where targets are” as well as obscure estimates of the battle damage and essentially to “raise the level of uncertainty.”

“If you look through the Chinese military science literature, you’ll find that they’re fairly conservative in their planning,” said Cozad. “And so, uncertainty could be a very difficult thing for them to deal with.”

Cozad affirmed that steps taken by Taiwan to protect its force and enhance its survivability throughout a prolonged conflict are exactly those that serve as a deterrent to an invasion by China. These include its elaborate system of underground facilities such as the Tri-Service Hengshan Military Command Center, built to defend against China’s ballistic missiles; the Air Operations Center, known as “Toad Mountain,” which oversees Taiwan’s air and missile defense networks; the F-16 facility at Chia-yi, which is entirely within a mountain; and a backup base on Taiwan’s east coast inside Chiashan, or “Optimal Mountain.”

Paal agrees with Cozad on the significance of survivability. “This is a top priority, and it has been undertaken,” Paal said. “Adm. Chen Yeong-kang, the deputy minister of defense, has been involved in this for some time. Taiwan has done a very serious job of trying to learn to use highways as runways when runways are blasted, and then to learn to repair runways when they are blasted, in order to keep their airplanes up.”

If the mountain housing the F-16s at Chia-yi is attacked, “it probably will survive, and when the planes come out flying, they will have the other threats of the surface-to-air missiles to deal with,” Paal said. Taiwan has been acquiring missile defenses, maybe not at a bold enough pace to meet the challenge from China, but certainly enough to raise the cost of China’s efforts to intimidate Taiwan.”

Chang perceives the cost to China of a military strike against Taiwan extending beyond the scope of battle expenses to the arena of global trading interests. “Any conflict or even tension occurring across the Taiwan Strait may have both a psychological and a substantial impact to the global market,” said Chang, “since both Taipei and Beijing have a significant role in various international merchandise supply chains.”

This anticipated cost to China’s trading interests not only deters China from seeking a military solution to unification with Taiwan but also has set it on a course to use its growing economic relationship with Taiwan as the cornerstone of its new strategy for unification.

“China’s primary objective is unification. And so there are a lot of ways that it could potentially do that,” according to Cozad. “Since 2008, when Taiwan’s President Ma Ying-jeou and his KMT party were elected, the relationship has been for the most part better. There’s been an effort on both sides to increase ties, political and economic ties, but again there are limits to what the Taiwan population — as a whole — are willing to accept.”

This perceived intolerance for increased unification, mixed with concerns about the consequences of unification — concerns fed by negative reports from Hong Kong’s population over their own unification with China, said Cozad — could prompt a return to power by the current opposition party, Democratic Progressive Party (DPP). DPP’s sympathies for the Taiwan independence movement, which favors having Taiwan as a sovereign country entirely independent from China, could put it at odds with the mainland, as it was a decade ago when Taiwan twice organized referendums related to independence.

A declaration of independence is the one action that Chang views as a probable cause for China’s military intervention against Taiwan. “The possibility of a military solution may occur only if Taipei claims a formal, de jure, political independence,” said Chang. “Changing the Republic of China into another name such as the Republic of Taiwan may trigger the conflict for sure. Other forms of seeking de facto independence can also be risky. On the other hand, accusing Taipei [of] delaying the unification process as an excuse for activating the military actions against Taiwan is relatively unlikely.”

The most likely scenario of any military intervention by China, according to Cozad, would be a blockade of Taiwan’s shipping lanes, thereby isolating it from the rest of the world.

Could the continuing prospects for the use — or threat — of force by China justify an expansion of Taiwan’s air defenses to include advanced fighter aircraft such as the United States’ F-35, as some have urged? Paal perceives more cost-effective ways to bolster Taiwan’s defenses. “Back in 1992, I was very much involved in selling the F-16 to Taiwan,” said Paal, “because at that time, the PRC’s [People’s Republic of China’s] capabilities had offset Taiwan’s ability to resist force being used against it.”

Since then, Paal contends, times and conditions have changed. “The attrition rate in combat between Taiwan’s advanced fighters — should they have them — and the capabilities that China now has to shoot them down, has gotten so high that you have to wonder if adding more fighters is the best way to spend money on Taiwan. Wouldn’t they be better off to have fast-moving patrol boats and helicopters and more anti-SAM patriot missiles and other kinds of anti-missile capabilities, as the focus for spending? Because when putting an airplane in the air, you lose U.S. $150 million or whatever the cost of the item is, whereas, you can launch quite a few missiles against the Chinese models for a lot less money.”  ο