Kim Jong Un emerged as a major question mark on the world stage in December 2011, when he inherited the North Korean dictatorship upon the death of his father, Kim Jong Il.

Few people had confirmation that Kim Jong Un even existed until shortly before he assumed power. His official debut came in 2010 when Kim was introduced during a military parade as a four-star general and vice chairman of the nation’s Central Military Commission. No one knew his age, though North Korea celebrates his birthday on January 8. Sources differ on whether he was born in 1982, 1983 or 1984.

His childhood and adolescence were so sheltered that they bordered on imprisonment, some say. While studying abroad in Switzerland, he assumed the pseudonym “Un Pak” and claimed to be the son of a diplomat working at the local North Korean Embassy.

“He is officially a state secret,” Andrei Lankov, a historian on North Korea and professor at Kookmin University in Seoul, South Korea, told FORUM. 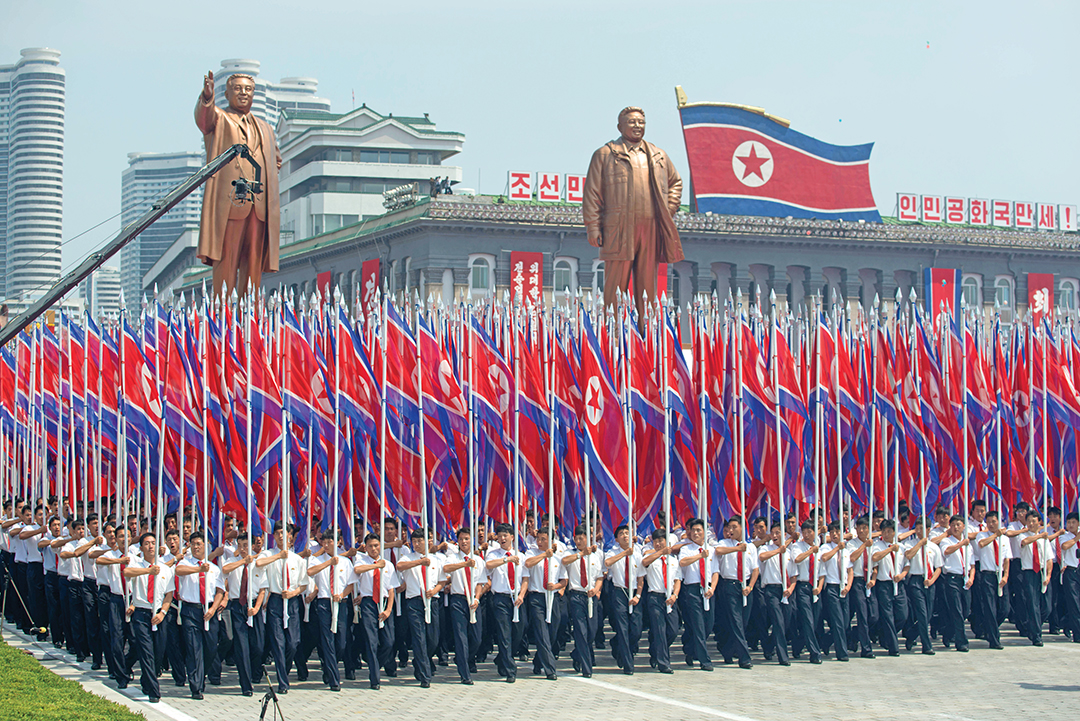 Much of Kim’s personal life as an adult remains shrouded in secrecy.

His wife, Ri Sol Ju, hadn’t made a public appearance for four months until she surfaced alongside her husband in April 2015 at a birthday celebration for the late Kim Il Sung, North Korea’s founding leader and Kim Jong Un’s grandfather.

It was former basketball player Dennis Rodman, an American, who announced the name of Kim Jong Un’s daughter to the world, saying in September 2013 that he had held baby Ju Ae during a visit to Pyongyang. Rodman called Kim “a good dad.”

Onlookers soak up such blips of information and glimpses into the Kim dynasty in hopes of learning more about the man who critics deemed most unlikely among his siblings to rule the country. Nearly four years into his dictatorship, the world doesn’t seem any closer to answering the question of who Kim Jong Un is.

“He is unpredictable. He will remain unpredictable,” said Lankov, author of the book, The Real North Korea: Life and Politics in the Failed Stalinist Utopia. “He is a rather young, emotional and impassionate person who makes decisions that look odd.”

Still, that hasn’t stopped scholars or news organizations from analyzing Kim’s latest actions in an attempt to assess his current mindset and predict his next move.

An unnamed senior U.S. official told CNN’s Security Clearance Internet blog that while Kim Jong Il was “colder and more calculated” in his actions, he remained more aware of ways to de-escalate tensions than his son.

“Nobody knows what he [Kim Jong Un] has planned, what he is thinking or contemplating doing or why the North Koreans are tripling down on their rhetoric,” the unnamed source told CNN in March 2013.

John Delury, an expert on North Korea at Seoul’s Yonsei University, said Kim has surpassed expectations in some ways.

“He came in as the youngest head of state probably on the planet, in a culture that values age and seniority and in a political system with lots of powerful people well over 60 years old,” Delury told Stars and Stripes newspaper in December 2014. “It tells us a bit about him and a bit about their system — even if you’re young, whoever is in that function of hereditary ruler — lots of people are going to make it work.”

Kim’s father found himself in a similar position when he began climbing the leadership ladder in the 1980s, Lankov said. Both men made mistakes as they learned how to lead, but they quickly made adjustments, he said. “Humans are smart. We are capable of learning by our mistakes. We are learning devices,” Lankov told FORUM.

North Korean demands nothing less than total and conspicuous adoration toward the state and, in particular, the Kim family. Murals, statues, posters and museums proclaim the legend of the Kim men who have led the country — probably none more so than Kim Il Sung.

Born April 15, 1912, he became president of North Korea in 1972 and held the position until his death on July 8, 1994. He also had served as a party leader and premier of the Democratic People’s Republic of Korea since 1948.

Among Kim Il Sung’s many titles: Father of the People, Great Leader and Eternal President. North Koreans have even referred to him as “Dear Leader, who is a perfect incarnation of the appearance that a leader should have.”

Because of the country’s unwavering affection for Kim Il Sung, Kim Jong Un has chosen to make as many comparisons to his grandfather as he can, Lankov said, right down to dressing like him.

North Koreans typically blame Kim Jong Il for the country’s famine during the 1990s, so Kim Jong Un does his best to distance himself from his father because of that lasting bitterness, Lankov said.

“There are quite a few political interpretations of Kim Jong Un’s resemblance to Kim Il Sung. One is that Kim is imitating his grandfather intentionally in the hopes that his grandfather’s legacy will help him increase his own power base,” according to an analysis on Kim Jong Un’s leadership published in December 2014 in The Hankyoreh, a Seoul-based newspaper.

The report included an assessment on Kim’s leadership from the South Korean Unification Ministry: “Even while Kim Jong Un plays upon the nostalgia for the past by mimicking the gestures and appearance of his grandfather, Kim Il Sung, he is also developing his own unique leadership style.”

Friends, Foes and Who Knows

Lankov sees more similarities between Kim Jong Un and his grandfather than mere nostalgic gestures and physical resemblances, particularly when it comes to North Korea’s current relations with China and Russia.

China has been a longstanding ally of North Korea, but recent provocations by Kim, particularly over the North’s nuclear program, at times have caused Beijing to distance itself from Pyongyang.

Headlines about boiling tensions between the two countries were published regularly throughout 2014. On the heels of such speculation came the announcement that North Korea had designated 2015 a “year of friendship” with Russia as Pyongyang looks to Moscow for economic cooperation to lessen its dependency on Beijing, the Financial Times reported in April 2015.

“The political relationship between our countries is developing more productively than ever before,” said Im Cheon Il, a North Korean diplomat based in eastern Russia, according to the Financial Times.

In October 2014, Russia agreed to repair 3,500 kilometers of rail tracks in North Korea in exchange for access to coal and other minerals.

Whether the perceived tensions between China and North Korea are a catalyst for the relationship between Pyongyang and Moscow remains debatable. Furthermore, investments between North Korea and China remain intertwined enough that economic relations will ensure diplomatic relations remain steady, though at times they may appear strained because of Kim’s actions.

“Beijing and Pyongyang are too important to each other to end their relationship anytime soon,” with China accounting for 57 percent of North Korea’s imports and 42 percent of its exports, according to a March 2015 report in The Diplomat magazine titled, “No, China Isn’t Abandoning North Korea.” “While North Korea relies heavily on Chinese trade and energy, it is also a central part of Beijing’s regional strategic goals. Therefore, Beijing’s position regarding Pyongyang’s nuclear program should not be taken as a reflection of its attitude toward Pyongyang in general.”

Lankov shared a similar opinion, though he doesn’t see the relationship between North Korea and Russia working out the way Kim may intend.

“He is probably going to be disappointed soon,” Lankov told FORUM. “He hopes to get aid, which will not require any obligation from his side.”

Lankov said Russia will invest in North Korea as long as it receives a return on that investment. Once that relationship sours — and Lankov predicts it will — North Korea will eventually make its way back into China’s good graces.

“China has had enough of North Korea in most regards,” Lankov said. “At the end of the day, China still needs a reliable buffer state.”

Lankov stressed that North Korea is not an impoverished nation as once widely believed. Current reforms have pushed the country into a recovery, and signs of economic improvement have sprouted.

“Many of the most important country revolutions started when the country was just doing all right,” Lankov said. “North Korea is poor but not desperate. Things are getting better, but that does not mean stability.”

While internal structural reforms take place, don’t expect any policy changes, foreign or domestic. “He’s not going to compromise on anything,” Lankov said of Kim.

On reunification, Lankov said China would likely accept a unified Korea but believes Beijing prefers a peninsula that remains divided but stable, particularly given his assessment that war is unlikely to occur.

“South Korea would not start a war. They are likely to win, but at a huge cost,” Lankov said, explaining that the South would likely sacrifice Seoul in a fight only to inherit a large, very poor and damaged area across the border. “It’s not going to be a cheap and easy victory for South Korea.”

Quite frankly, Lankov said, North Korea is unlikely to start a war, because they know that for them, it would be a losing battle.