How to establish technical reachback

Effectively targeting terrorism’s ties to weapons of mass destruction (WMD) in the long term requires that governments address the causal factors that foment and sustain violent extremism. In the short term, however, governments should strive to limit access to weapons and components that terrorist groups seek to employ to achieve their goals. This presents an enormous challenge to state governments, because technological innovations and the rapid spread of knowledge have placed WMD and improvised chemical, biological, radiological and nuclear (CBRN) weapons within the reach of terrorist groups intent on using them to create chaos and casualties. Awareness and cooperation among military, law enforcement, border patrol and technical officials — combined with appropriate legislation to prohibit terrorist activity and regulate sensitive commodities — is needed to effectively and proactively combat WMD terrorism.

In addition to the increased spread of knowledge and information, rapidly evolving global economies and industries make CBRN-related, dual-use commodities and materials more plentiful and easily accessible. While the manufacture and large-scale production of WMD programs still require enormous investments in industrial and human capital development that largely limit acquisition to nation-states, today many critical materials, components and technologies are readily available and can be improvised on a small scale for relatively few resources. Terrorists routinely exploit the free flow of information and easily accessible goods to advance their tactics and weapons by incorporating the latest scientific and technological innovations into their plans. 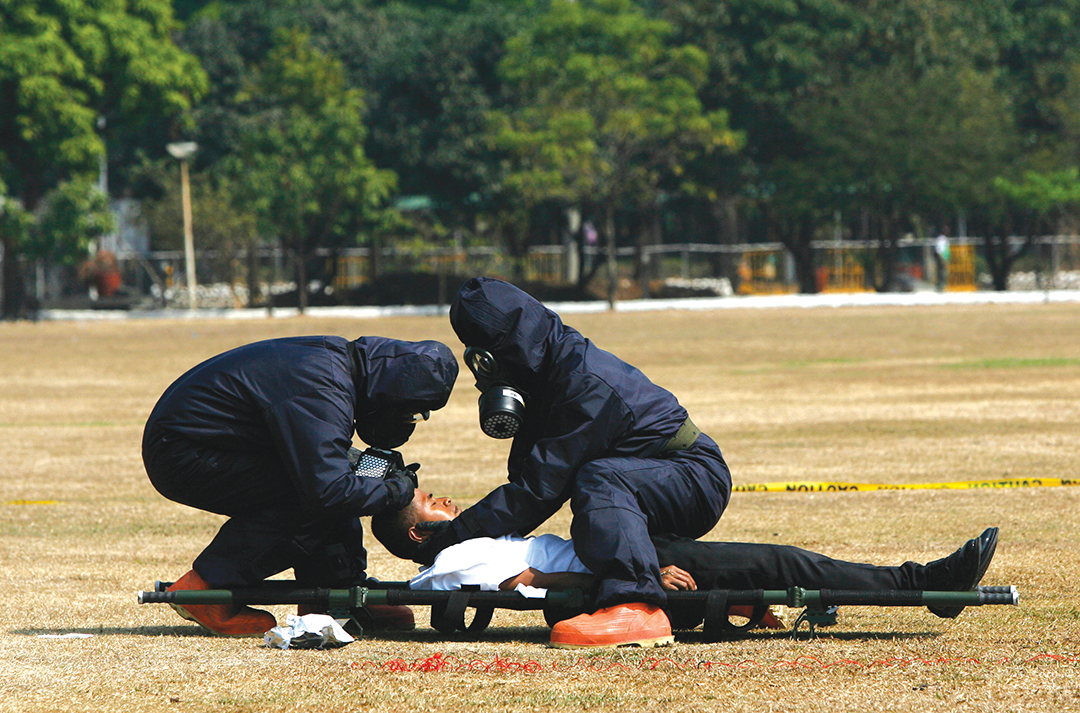 Members of the chemical, biological, radiological and nuclear explosives unit of the Armed Forces of the Philippines assist a mock victim during an anti-terrorist drill in Quezon City in March 2014. REUTERS

Given the accessibility of the items and resource limitations, terrorist organizations are likely to pursue small-scale, improvised WMD or CBRN devices — ranging from repurposed toxic industrial chemicals, such as ammonia or chlorine, to weapons such as anthrax and radiological dispersal devices (also known as dirty bombs).

As sensitive goods, technology and expertise become available, certain commodities are more likely than others to be exploited for CBRN weapons. For instance, biological and chemical WMD-related materials, components and equipment are at the greatest risk of being used by terrorist organizations because they are widely available. Although nuclear weapons have not been used by terrorists and would be harder to develop, terrorist organizations have said they would like to use these weapons, and some have employed technical experts and taken steps to research the weapons. No terrorist organization has used a radiological weapon, but attempts have been made.Moreover, orphaned or stolen radioactive isotopes remain an enduring issue of concern. According to the 2014 report by the International Atomic Energy Agency (IAEA) Illicit Trafficking Database, the 125 participating countries reported more than 2,477 incidents of nuclear materials out of regulatory control between 1993 and 2013. Of these, 424 were incidents of criminal possession including attempts to move, purchase or sell radioactive sources. During the same time period, an additional 664 incidents of lost or stolen radioactive material were reported, according to the database. The materials reported range from the less dangerous to extremely hazardous isotopes such as caesium-137 and americium-241.

Fighting the CBRN threat requires a familiarity with components and technology that enforcement officials do not normally possess. However,  it is essential that law enforcement maintain a close working relationship with subject matter experts and technical agencies that can provide training on the effects, impact and technical specifications of CBRN-related commodities. Effectively preventing WMD terrorism requires familiarizing enforcement officials not only with the CBRN commodities, but also with the national experts and agencies that can help identify, secure, transport, manage, respond and investigate WMD incidents. Furthermore, technical experts are better positioned to request international assistance from the IAEA and other organizations should additional resources be required. The technical reachback these agencies provide front-line enforcement officials is invaluable and should be an inextricable element of national efforts to prevent proliferation and target WMD terrorism.

Terrorist pursuit of WMD is a real and persistent threat to international security. Cooperation among military, customs, law enforcement and technical agencies to better understand the WMD terrorism threat and CBRN commodities is essential to countering terrorist attempts to acquire, develop and use these weapons. Establishing a technical reachback partnership between enforcement and technical organizations early as an integral part of training can streamline communication during critical, time-sensitive CBRN incidents. This interagency approach to training, combined with robust anti-terror legislation and regulations for CBRN-related commodities, builds national capacity to target and prevent improvised WMD terrorism acts.