Rewatiraman Shukla, a young office worker living in a slum on New Delhi’s outskirts, can’t remember a time when his family did not have a newspaper delivered to their home. Even when home was a single room in a congested tenement without indoor plumbing. Even when his father was working long hours as the single breadwinner to provide the bare necessities.

The newspaper was what Shukla’s father believed would open the world of opportunity for his three children. And now, families like his are firing the exceptional growth of regional newspapers in India.

At a time when scores of American newspapers have downsized or shifted to online editions, the Indian newspaper industry is booming. Media analysts say the regional language newspapers are expected to attain double-digit figures in the coming decade as millions of new literates choose newspapers as their primary source of information.

Newspapers, especially in the regional languages, are a fast-growing space in India right now. We are bang in the middle of it, so we are very excited,” said Pradeep Dwivedi of Dainik Bhaskar, or Daily Sun, the most popular Hindi newspaper in the country, with about 3.57 million copies sold each day. 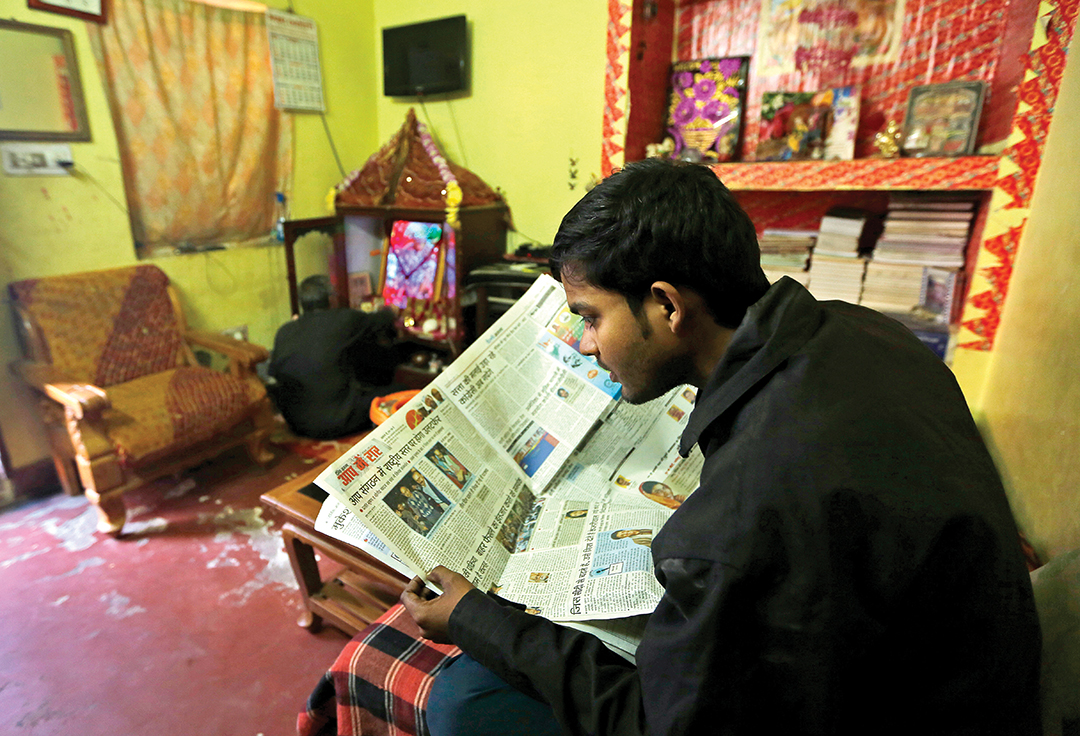 Rewatiraman Shukla, 24, reads his morning newspaper in his house in New Delhi, India.

Democratic India has had a long history of print news; the first newspaper was founded more than 230 years ago. The government’s Registrar of Newspapers in India lists more than 82,000 newspapers. Nearly 33,000 of these are in Hindi, the language spoken by 41 percent of India’s 1.2 billion people. Thousands of others are in India’s many regional languages, and many of those also have circulations in the millions. Readership is even greater, because a single copy of a newspaper is often shared by many readers.

Overall, regional newspapers will grow 12 to 14 percent annually for the next several years, according to estimates by consulting firm KPMG India.

Media experts said the newspaper boom in the smaller towns is driven by its young and aspirational population. The enormous push for education over the past five decades has bumped up literacy rates, which grew from 65 percent to 74 percent in the decade ending in 2011. But there’s a long way to go, with the government predicting universal literacy will be achieved only in 2060.

In the West, the Internet has cut deeply into newspaper circulation and advertising revenue, but in India, it hasn’t happened yet. Though Internet access is rising rapidly in India, about 80 percent of the country still lacks it. Indian newspapers, which can be delivered for less than 120 rupees (U.S. $2) a month, are much more accessible.

The plethora of television news channels in regional languages has surprisingly only increased newspaper readership, said P.N. Vasanti, director of the Center for Media Studies in New Delhi. “We call it the ‘appetizer effect.’ In a study of media habits of people, we found that the more that people watched television news, the more they were turning to the newspapers to check the facts,” she said. “In India, the credibility of newspapers and the written word is way beyond that of the television news channels.”

With the Indian economy picking up pace, advertising revenues are up. Up until now, the English language newspapers commanded a large chunk of the advertising budgets of merchandisers. But, those were confined mostly to India’s largest cities.

Now, advertisers have discovered the vast spread of the vernacular print media and its ability to reach customers in thriving medium-size towns. Driven by growing readership, and the increasing economic clout of a vernacular-speaking middle class, makers of fast-moving consumer goods are looking at smaller towns and rural India as potential boom markets, said Dwivedi.

“The real growth for the regional newspaper is in the smaller towns, where new literates are coming to the fore and where people still lead a slower-paced life, giving them enough time to peruse the day’s paper,” said Dwivedi.

Newspaper coverage, too, has changed with color supplements and extra pages on food, fashion and jet-setting lifestyles, catering to people with disposable incomes and a burgeoning young population.

As rapid urbanization erodes traditional familial networks, newspapers serve other purposes, too. The age-old role of the matchmaker to find a spouse for a young man or woman for a customary arranged marriage is now served by the classified advertisements in the local newspaper.

In a country where caste origins play a big role in determining marriage alliances, people see the regional newspaper as a convenient way of reaching out to their community members. On any given weekend, classified matrimonial ads running into several pages in many vernacular newspapers remain a real revenue-spinner.

Rewatiraman’s father, Ved Prakash Shukla, has been subscribing to a Hindi newspaper for 15 years for his children’s sake, even when tight finances made it something of a luxury.

“It was tough. My wife would scold me, saying, ‘Why are you wasting money on a paper when we don’t have money to buy food?’ ” Shukla said one recent morning as he sat on the stairs outside his tiny home with his paper and morning cup of tea.

“But I saw the newspaper as an investment in my children’s future. In my job as a chauffeur, I saw how the children of the rich speak English and know all about what’s happening in the world.”

Shukla’s investment appears to be paying off. Rewatiraman was recently promoted and has begun climbing the corporate ladder with some success. “All those years of reading the paper. It’s been worth it,” he said.