With a combined population of more than 600 million people, the member countries of the Association of Southeast Asian Nations (ASEAN) have a larger population than the European Union or North America. Founded in 1967, ASEAN today counts Brunei, Burma, Cambodia, Indonesia, Laos, Malaysia, the Philippines, Singapore, Thailand and Vietnam as member states. Their economies span vastly different stages of development, but all share immense growth and income generation potential. 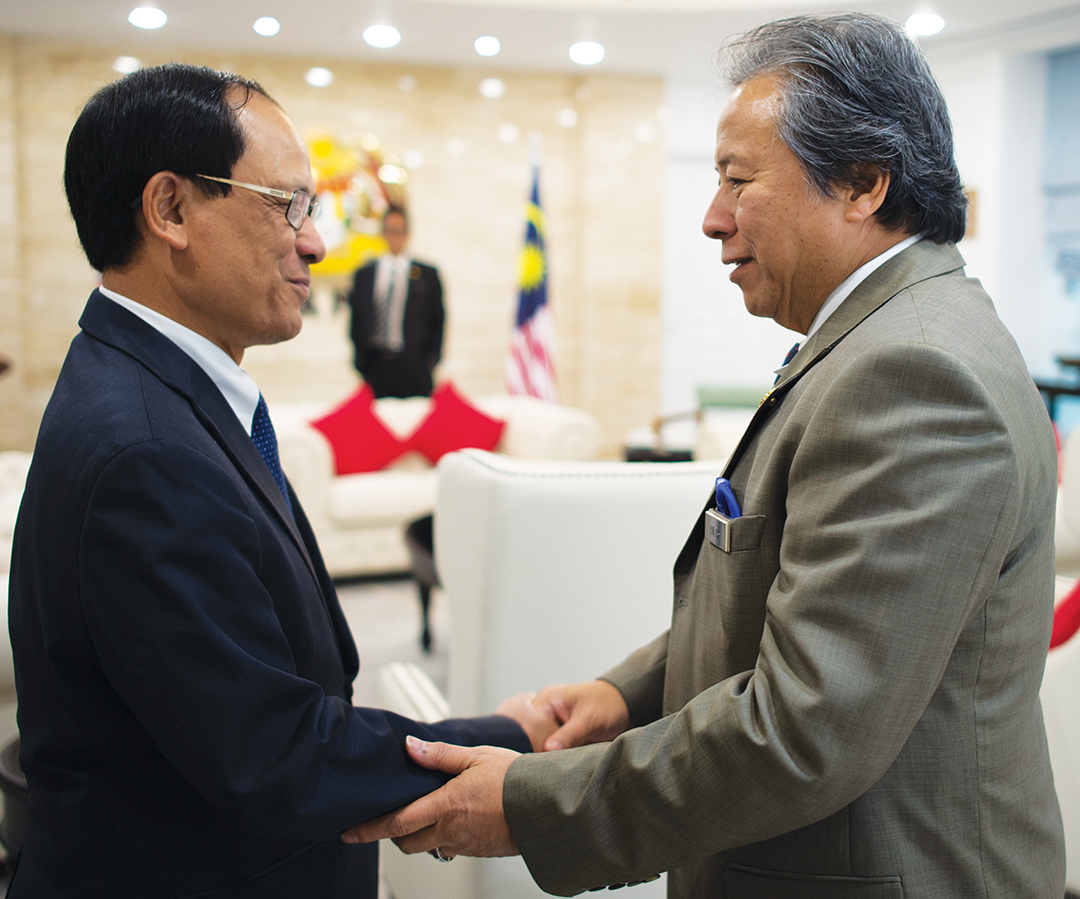 Investors also do not want to miss tapping the potential of the 10 dynamic markets that make up ASEAN. Companies and governments realize that an overbearing dependence on the already overheated Chinese market can be a risky proposition in the future.

India is a vibrant democracy. However, managing the pulls and pressures of multiple, electorally significant pressure groups and regional parties can sometimes be a nightmare for any government. This often dilutes focus on governance and sound policy.

In its annual “Asian Development Outlook for 2015,” published in March of the same year, the Asian Development Bank (ADB) said China’s economy is slowing, but Asia will remain a growth hot spot as India and Southeast Asia economies roar ahead. Emerging Asian economies will grow 6.3 percent in 2015 and 2016, unchanged from 2014, the ADB said. According to a May 2014 report by the consulting firm McKinsey & Company, if ASEAN were a single country, it would already be the seventh-largest economy in the world, with a combined gross domestic product (GDP) of U.S. $2.4 trillion in 2013. It is projected to rank as the fourth-largest economy by 2050. The competition within is immense. While Indonesia is the largest economy of Southeast Asia, there is no guarantee it will remain so.

ASEAN is reaping a demographic dividend due to its youthful population, according to McKinsey. “Perhaps, most important, almost 60 percent of total growth since 1990 has come from productivity gains, as sectors such as manufacturing, retail, telecommunications and transportation grow more efficient.” However, despite a long and fruitful journey forward over the decades, there are challenges ASEAN needs to address.

These include ironing out processes of economic integration; mitigating suspicions linked to nontariff protectionist measures; expanding horizons to cooperate with other emerging economies such as India; and dealing with apprehensions about Beijing’s widening contour of influence and territorial assertiveness across the region, especially resource-rich South China Sea.

“ASEAN does not need to introduce new efforts in 2015, but actually focus on implementing pending measures under ASEAN Economic Community, or AEC, Blueprint,” said Daniel Wu, an international trade analyst and fellow with the Center for Strategic and International Studies (CSIS) Pacific Forum, said in an interview with FORUM. “The ASEAN chair, Malaysia, is taking certain steps to advance AEC agenda in line with recent global trade developments. Malaysia is reportedly attempting to reach consensus among ASEAN member states to commence negotiations toward an ASEAN Trade Facilitation Agreement. Malaysia is also a strong supporter of ASEAN Business Travel Card, although discussions are underway.”

The way the ASEAN bloc will shape up in the offing will depend upon the diplomatic efforts of Malaysia. Tasked with chairmanship of ASEAN in 2015, Kuala Lumpur has stated that realizing the AEC by the end of the year will be its primary aim. 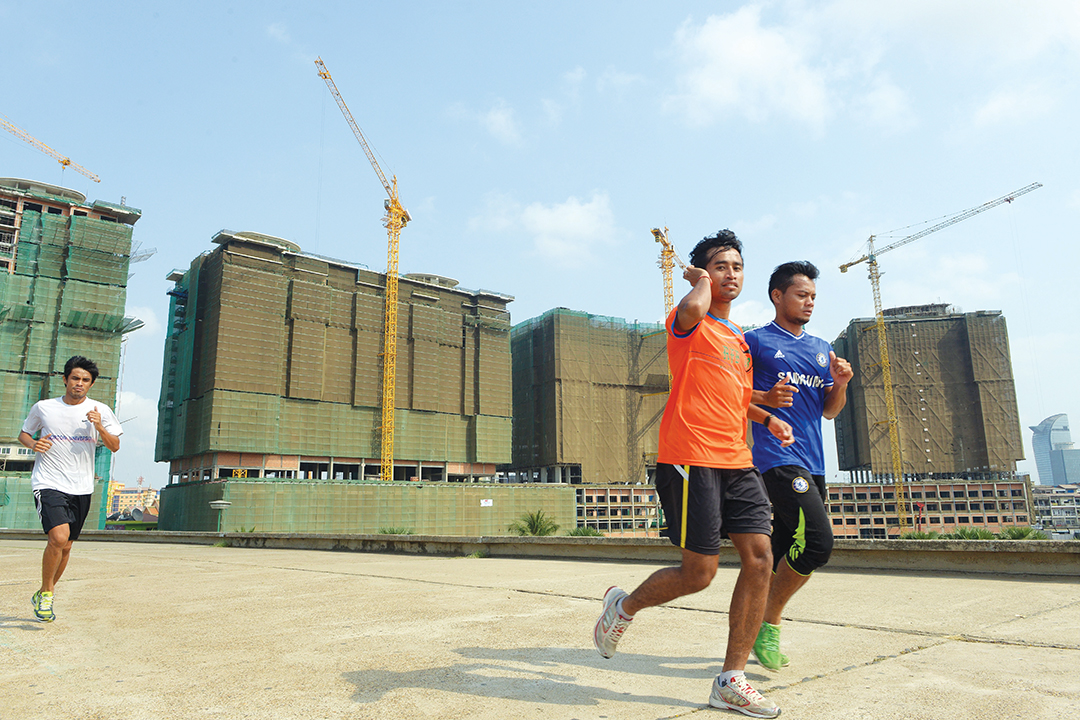 Cambodian men run in front of a construction site in Phnom Penh in March 2015. The Asian Development Bank predicts the Cambodian economy will grow by
7.3 percent in 2015.
AFP/GETTY IMAGES

The goal is to stimulate the idea of an ASEAN identity to address rampant, excessive and often surreptitious nontariff measures that hamper regional trade and skew costs. In his recent analysis for the East Asia Forum, Wu of CSIS stated, “It would be unrealistic to expect Malaysia to overcome several years’ worth of delays and disagreements over noncompliance in the AEC implementation process. The minister of international trade and industry’s clear perspective on the leadership ASEAN needs provides a basis for optimism that ASEAN can focus its will and resources to implement the ‘last mile’ integration measures the region needs in 2015.”

In remarks to journalists at the 25th ASEAN Summit in Burma in November 2014, Malaysian Prime Minister Najib Razak spoke about plugging the information gap to spell out clearly tangible benefits of liberalization under AEC. He said this builds approval of differing populations, thus translating into a broad political consensus for engagement. “The people must understand what actually ASEAN is and what ASEAN is doing,” Razak said.

Mustapa Mohamed, Malaysia’s minister of international trade and industry, spelled out his government’s goals in a statement issued in mid-January 2015.

“The prime minister has publicly declared that Malaysia will not shy away from addressing the sensitive issue of protectionism among ASEAN member states and will seek to defuse the rising rhetoric of nationalism. Malaysia will seek to cogently articulate the necessity for ASEAN members to embrace regional perspective, to look beyond narrow parochial concerns.”

In further comments to FORUM, Wu added, “Malaysia has taken up the responsibility to meet [the] target of implementing at least 95 percent of the measures stipulated under the AEC Blueprint in 2015. The fact is that, as of August 2014, ASEAN only collectively implemented 82.1 percent of the 229 AEC key deliverables targeted for completion by 2013, [which] indicates that this already is an ambitious target. If Malaysia can lead ASEAN to achieve the 95 percent threshold, ASEAN will, by all accounts, achieve a seamless AEC. Malaysia’s leadership is needed to encourage the ASEAN member states to push through on their domestic implementation.”

The challenge of China

There is no consensus or unity among ASEAN members about dealing with China, including Beijing’s territorial challenges in the South China Sea that affect ASEAN members Indonesia, Cambodia, Brunei, Philippines, Vietnam and Malaysia. Malaysia, for example, has proposed that ASEAN countries form a joint peacekeeping force. The idea is widely perceived as a nonstarter due to lack of trust among ASEAN members over security matters. China, on the other hand, believes that the issue of its territorial aggression in the region has been blown out of proportion, helped in no small measure by the English language media with a pronounced pro-Western bias. Beijing has long insisted that geographical disputes need to be resolved between nations that are impacted rather than by multilateral bodies. 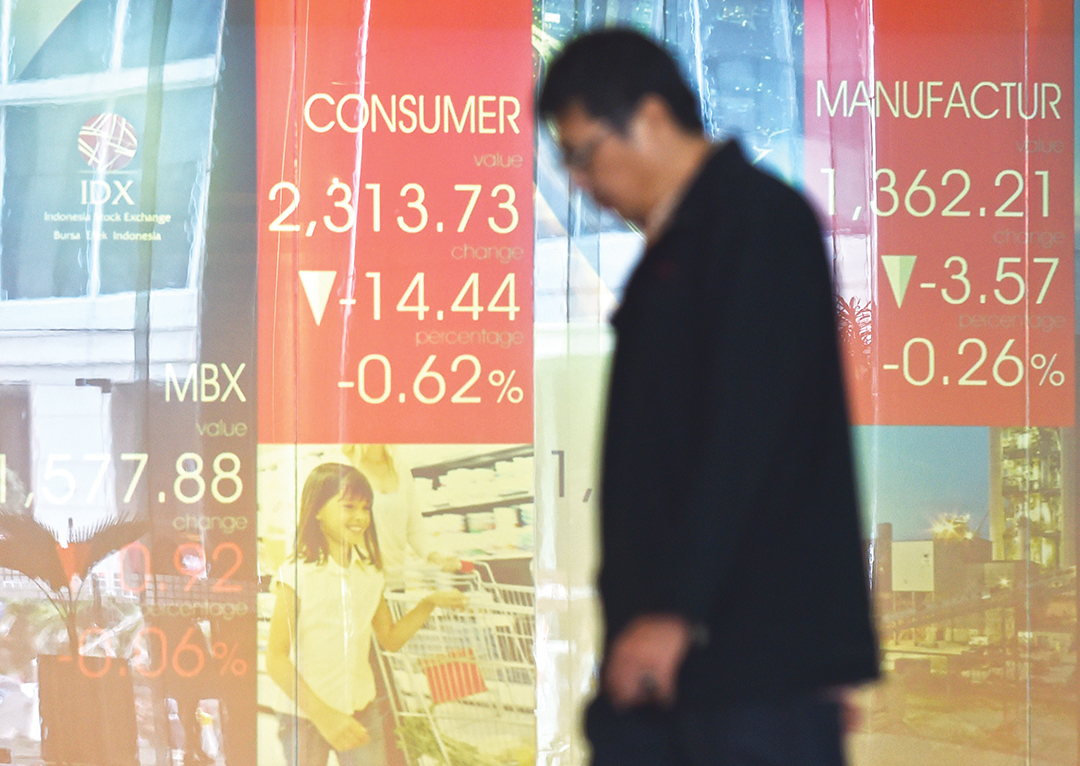 An Indonesian man walks past a display showing share prices at the stock exchange building in Jakarta in March 2015. AFP/ IMAGES

“We support the building of the ASEAN community, but ASEAN is not a party concerned to relevant disputes over the South China Sea,” Hong Lei, a Foreign Ministry spokesman, told reporters during a regular March 2015 news briefing. Lei was responding to critical comments by ASEAN Secretary-General Le Luong Minh on the South China Sea dispute. China also rejected a proposal from ASEAN countries to discuss implementation of the 2002 Declaration on Conduct of Parties in the South China Sea and further establish a formal code of conduct at a defense ministers’ meeting slated for November 2015 in Malaysia. Beijing’s dismissal again points to deeper strategic suspicions that ASEAN has been co-opted by America, other Western powers and Japan to contain China’s growing regional influence, both territorial and economic.

China is known to speak in dual tones when asserting its hegemony over territorial matters. The leadership maintains a mundane adherence to diplomatic protocols and nuances. At the same time China does not hesitate to deploy its massive military arsenal, which can only be matched by that of the United States, to send across a belligerent message should the need arise.

“The Chinese perception of ulterior motives for the involvement of the U.S., and the depth of China’s angst, cornering and publicly embarrassing China on South China Sea issues is politically risky and could have dire consequences for the region,” according to Mark J. Valencia, an adjunct senior scholar at the National Institute for South China Sea Studies in Haikou, China. “If lessons are not learned on all sides, refusal to discuss may well be a harbinger of worse to come.”

According to Wu, however, China has generally been supportive of ASEAN’s attempts toward economic integration, trade and greater investment, despite geopolitical differences it may have with the goals of the organization.

“ASEAN has generally preferred the balance of powers with respect to its engagement with its dialogue partners. However, China has been supportive of ASEAN’s integration efforts. Most recently, China and ASEAN have commenced negotiations to “upgrade” the ASEAN-China Free Trade Area to examine opportunities for further tariff liberalization and updates of rules of origin for more flexibility.”

During the 26th ASEAN summit on land acquisition in the South China Sea and Code of Conduct, ASEAN members also “reaffirmed the importance of maintaining peace, stability, security and freedom of navigation in and overflight over the South China Sea,” according to an April 29, 2015, account in The Diplomat magazine.

Hong said China is “gravely concerned” about the statement and views it an example of “a few countries’ taking hostage the entire ASEAN and China-ASEAN relations for their own selfish gains,” The Diplomat reported.

India, the second most populous country in the world, has been seeking enhanced cooperation with ASEAN. Areas include maritime security, freedom of navigation, anti-piracy, disaster relief, counterterrorism and peaceful settlement of disputes in accordance with international law. Prime Minister Modi’s visit in late March 2015 to attend the funeral of Singapore’s founding father Lee Kuan Yew underlined the importance of India’s Act East Policy.

Always concerned about China’s growing influence in South Asia, whether military or economic, whether in Nepal, Bangladesh, Sri Lanka or Burma, New Delhi has kept a close watch on the territorial dispute in the South China Sea. India has been supporting freedom of navigation in the South China Sea, citing principles of international law, including the 1982 U.N. Convention on the Law of the Sea. The South China Sea dispute formed part of the India-U.S. joint statement issued during U.S. President Barack Obama’s visit to New Delhi in January 2015. India’s flagship state-owned explorer Oil & Natural Gas Corp. (ONGC) has operations in oil blocks in South China Sea that Beijing has been unhappy about.

Vietnam has been pushing for greater exploration efforts by Indian firms. New Delhi has chosen to back ONGC’s forays in the South China Sea because Indian hydrocarbon companies are well-versed with the strategies employed by Chinese entities to win rights to energy assets across the world, whether in Africa, Burma or South America. State-backed Chinese energy companies are known to deploy multiple tactics, including sweetened deals and financial and political muscle to get their way.

Trade is another focus of engagement between ASEAN and India. The two regions represent an aggregate population of 1.8 billion of mostly young and highly aspirational individuals. The ASEAN-India Free Trade in Goods Agreement signed in 2009 has boosted commerce, Anil Wadhwa of India’s Foreign Ministry said in March 2015 at the India-ASEAN Delhi Dialogue VII. He said trade figures between the two economies went from U.S. $44 billion in 2009-10 to more than
U.S. $74 billion in 2013-14. “This year [2014-15], the figure is expected to rise to U.S. $100 billion,” Wadhwa added. “Our aspiration is to take ASEAN-India trade to U.S. $200 billion by 2022, and the RCEP [regional comprehensive economic partnership] negotiations, which are currently underway, will also contribute to this.”

“Trade liberalization between ASEAN and India, by way of the ASEAN-India Free Trade Area, creates additional opportunities for innovation and stronger productivity growth,” added Wu. “Trade and investment flows spread new ideas and innovation, leading to improvements in the goods and services that people and businesses use. This is good for both ASEAN and India, as both sides are in a period of rapid economic growth and development, so trade cooperation helps to ensure channels remain open for their people and businesses to communicate and collaborate.”

The territory that comprises ASEAN is a region of immense potential and dynamism, analysts and economic experts agree. If harnessed well, there is every reason for incomes and well-being to spread to an even larger swath of populations across Asia and more. It remains to be seen whether 2015 will be the year that the challenges are scaled and a new order emerges.